Birds can be heard everywhere this time of year, even in the concert hall.  James Russell Smith is Assistant Chair of Composition at the Berklee College of Music in Boston, MA, and Assistant Conductor of the Arlington Philharmonic Orchestra.  His new piece, Memories of Cape Cod Winter Birding, for Soprano and Orchestra, will premiere on April 29, 2012 with Robin Ginenthal, Soprano, and the Arlington Philharmonic Orchestra.  Karen Allendoerfer, violinist with the APO and violinist.com blogger, interviewed Jim about the piece on April 13. 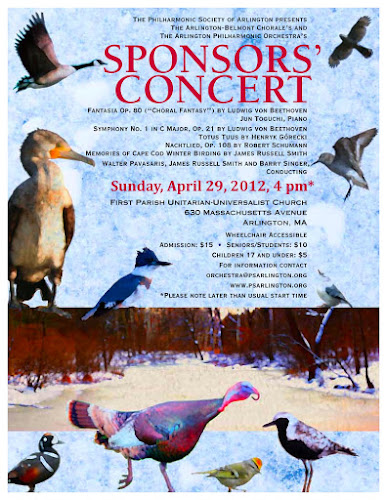 Karen: What inspired you to write this piece?

Jim: In this case I was actually asked to write it.  A couple of years ago I was approached by John Hecker, a French Horn player in the orchestra. He knows Ray Brown, who has a show on WGBH, called “Talkin’ Birds”. We’re not experts, but my wife and I just love birds, so it was very easy to sign on to this project.  After I talked to John, by the time I got home I was already hearing the music in my head, and I had started the piece.

That was in late Fall 2010.  Then things got really busy, and it wasn’t until May 2011 that I started really writing it down.  I remember, it was graduation day at Berklee, and I had just gotten home from playing timpani the faculty graduation band. That afternoon, I started sketching almost all of the melodic setting of the text. Later that summer I began to flesh out the orchestral parts and putting them into Sibelius, my music software. The bulk of the writing took 6-7 months, except for the ending, which went through several changes afterwards.

Karen: Thanks for letting us know about Ray Brown’s show.  I wasn’t familiar with that before.  Have you been in further contact with Ray since finishing the piece?  And, are you a birder yourself?

Jim: Oh yeah, I sent an early sound file to Ray, and I’ve talked with him on the phone a few times.  He plans to come to the concert on April 29.

As I said, I’m no expert, but for a present several years ago, my wife gave me a live bird-drawing class, which took place during February in Ipswich.  In that class we did speed drawings of all kinds of birds out there—cardinals, blue jays.  But I think more species winter along the shoreline, especially duck-like varieties and shore birds.

Karen: What is in the text that the soprano is singing?

Jim: It is a basically a catalog of the birds that you can see during winter there, and it names local towns.  Ray read this over the air on his show I believe. It’s a wonderfully evocative text, but it’s a challenge to me because it’s not a poem.  I am normally used to working with poetry, something like the Robert Pinsky English translation of the 5th canto of Dante’s Inferno, which I orchestrated for the Back Bay Chorale several years ago.  But this is purely narrative, but with much color and sound imagery.

Karen: Why a soprano, if it is based on something that Ray read?

Jim: It was originally going to have just a narrator. But then I even suggested that Ray could read the first two lines and then the singing voice would take over. However, Ray thought it would be better sung throughout, and I agreed.  He mentioned a soprano, which was also how I was hearing the vocal lines.

Karen: Can you take us through the ‘story’ that the piece tells? Are there specific birds in it that you can hear?

Jim:  Well, it’s not so much a story as it is an opening to an experience.  And there are not any real birdsongs in the score at all. Other composers, for example Olivier Messiaen, have exquisitely transcribed birdsong.  So that’s been done, and he’s done it better than anyone.  And I don’t have that mental catalog that he had at my disposal. But this piece is meant to evoke birdsongs.  It’s my own musical fantasy of birdsong.

What I imagine is a quiet, cold winter day.  I imagine a small harbor, with small craft in the water (which is kind of ridiculous, I know, because they take the boats in during the winter).

In Bar Harbor, Maine, there is a harbor like this.  There is a lighthouse in the Southwest Harbor, the “quiet end”, as the locals call it.  There are bell buoys in the water, so people know where the channels are.  I picture the ocean gently rocking the bell buoys by the lighthouse. 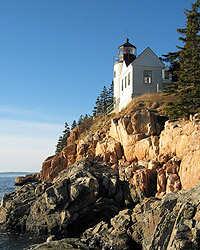 It is quite enchanting to listen to that sound, and the vibraphone provides a touch of that feeling in the beginning.  Later the crotales provide some of that feeling.

Karen:  What are crotales?

Jim: Crotales (antique cymbals) are little bitty disks: they look like golden cymbals and are pitched.  Debussy was the first composer to use crotales in European music, in “…Afternoon of a Faun.”

Karen: I want to step back from this specific piece for a minute and look at the larger picture.  What do you see is the state of modern concert music today?

Jim: Music today comes from where it’s always come from, the composer’s imagination. It (formal concert music) is an antiquated art form that still feels relevant, and thrives in a lot of ways. But, the situation of the modern composer is difficult. Historically we’ve always depended on live performances.  Nowadays where do you market your work?  Who’s buying the music? When you’re asked to write a piece for a commission, it’s only then that you are still working like Haydn and Mozart. But, it seems the majority of pieces just get written because we’re driven to do it. So, most of us are teaching at colleges. There is a lot of music that just doesn’t get heard.

Karen: How do you think it got that way?

Jim: There were some extremes in the early 20th century, when there was less tonality in music. That drove a lot of the audience away. Audiences like to listen to tonal music, and they retrenched and stayed there. So many of us are still competing with Beethoven and Brahms, the great ghosts who take over even today’s programs.  They deserve it: it’s great music.  But it also means that the modern composer has to stick a knife in a small crack in the door to try and pry it open in order to be heard.

I love writing, but I kind of cringe at all that other stuff—the self-promotion, the technology.  But I am fascinated when I see my students doing so well.  They’re the future.

Karen: Where would you look for the most exciting new composers of today?

Jim: In the Boston area, I’d check out the Boston Modern Orchestral Project (BMOP). They specialize in works from modern composers. They have some great programs, performing music from young—and not so young—talented composers.

Karen:  Tell us a bit about your writing process.  How has technology affected the way you compose music?

Jim: It used to be that a composer would just write the score and then get someone to copy the parts.  Nowadays you do your own parts through computer programs.

I can write by hand faster than by computer, so I usually start composing away from the computer.  Then I get to a point where I have enough to start inputting, and then before I know it, I’m composing there at the computer.  It’s something I said I’d never do, but I’m becoming more and more comfortable doing that.

The value of these computer programs is that you can get immediate playback. Of course you have to be careful with this, as I tell my students. Unless you’re very experienced you may do something like set one alto flute against the whole trumpet section. On the computer it all sounds perfect, but when you rehearse it with an orchestra you have to adjust for real humans playing the piece.  Luckily I have that prior experience with conducting orchestras to guide me.

Karen:  As a percussionist, what is it like to write for strings and woodwinds?

Jim:  Well, it’s true there aren’t many composers that come from the percussion ranks, so I get that question a lot.  But there is a great deal of training that goes into being a composer that is separate from performance.  My undergraduate study was in percussion performance, but even in that degree I had to take a brass class, a woodwind class, and 2 semesters of violin.  And I studied piano.  Piano was what really showed me how it all fit together.  Piano was the key for me.

I also had a short time playing guitar which was my first avenue into song writing. When I was growing up, I was inspired by the Beatles, who were the ones who really made songwriting an issue.  Until them, you never thought much about who was writing, say, Elvis’ songs. But the Beatles were even more important to us because of their song writing than all the hoopla surrounding them. I used to sing with a little trio and did some recordings back in my teens.  I think there’s a whole generation of us who kind of went that way: thought we were going to be pop songwriters and when that didn’t happen, ended up as classical composers. 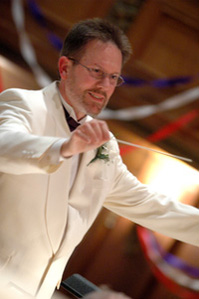 Karen: How do you feel conducting your own piece for the first time?

Jim: Well, it’s a little scary. But what’s harder is when you go hear someone else conducting your piece.  They’ve been rehearsing it and they’ve already formed an opinion when you finally get invited listen in.  So you can start thinking, what is going to happen when I show up?  Are they excited about your piece or do you get that feeling that you just want to go and hide now?

In many ways it’s easier conducting and experiencing it together with the players from the start.  That’s more like in the old days, when everyone was reading. Mozart wrote the overture for Don Giovanni the night before, and everyone was sight-reading it during the performance. You used to have to get the musicians to hear the piece from nothing. Now it’s easier to give a computer sound file to the players for them to get a prior idea of what the piece is like.

From Tom Holzman
Posted on April 19, 2012 at 8:09 PM
Karen - very interesting interview. How exciting for you and the orch. We will be interested to hear how it plays out. My orch last year premiered a piece by a local composer, Maurice Saylor, and the former music director wrote several very good pieces we premiered. It is always very exciting to participate in the creation. My wife and I recently had the thrill of seeing the premiere of a play by a local playwright that we helped workshop on several occasions.

The birds reminds me a bit of the bird sounds used by former WGBH DJ Robert J. Lurzema on his classical music show.

From Laurie Niles
Posted on April 19, 2012 at 8:41 PM
Thanks for sharing this Karen! It's wonderful that your orchestra is supporting the works of present-day composers. This one sounds really fun!
From Emily Hogstad
Posted on April 21, 2012 at 3:50 PM
I'm always a little unnerved when I see non-professional journalists conduct interviews that are ten times better than what you'd see in a newspaper. Thanks for this interview, interesting questions and answers!!
From Karen Allendoerfer
Posted on April 22, 2012 at 7:03 PM
Thanks for the nice replies! Jim was really wonderful to interview, so he made it easy, and Laurie provided some suggestions for questions. Tom, it's cool to hear about all the modern works your orchestra is supporting too.