The first concert I ever performed with the Arlington Philharmonic, in 2008, was that year's Family Concert. Every year at the Family Concert we have a young soloist, the winner of the year's Young Artist's Competition under-18 division. This year's soloist turned 12 between the first and second rehearsals.

For the first time since I've been there, the competition winner played a piece I have actually played myself, although not performed, Saent-Saens Introduction and Rondo Capriccioso. I was learning that piece during the year I lived in Germany between high school and college. I lived in a 3rd floor bedroom, where I practiced, sometimes looking out the window as I did so, over the neighborhood and the little fenced-in yards. Although I didn't look at it that way at the time, I have to agree that the piece is, as even our wonderful conductor said, "arrogant." Back then I had a recording--on vinyl--of Heifetz playing it, that I listened to. He takes the last page lickety-split. I could never match his tempo, but our soloist does, without even breaking a sweat. I would, later upon returning to the US, have a disastrous audition playing that piece, an experience that led me to put the violin virtually out of sight and out of mind for a while, an experience that cast a pall over the beginning of my freshman year, an Icarus-like experience of arrogantly flying too close to the sun, and then crashing. But here, sitting in the orchestra, with that particular burden of soloistic perfection on someone else, I'm back in Berlin, just listening. My favorite part has always been the Introduction, the part that you don't need to take lickety-split. It brings to mind the warm spring evenings as I looked out into the twilight while I practiced.

I don't know how long the Family Concert has been scheduled for the second Sunday of school vacation week, but since the orchestra has been around for 78 years, it's possible that it's been 78 years. That first year I was a member I was driving back from visiting my parents near Buffalo, NY. I left at 5 am and made it with time to spare for a 3 pm concert.

I visited my parents for this year's vacation, too, but came back in a more sane time window: in time for the dress rehearsal on Wednesday. And I left at 10 am, not 5. That morning, in the rush to get going, I cut my left middle finger while using a knife to cut a bagel on a cutting board. That brought to mind a story I read on violinist.com, about Nadja Salerno-Sonnenberg, who had an almost career-ending accident while cutting something on a cutting board. Fortunately, I just missed the finger pad and the wound is superficial. I wind a band-aid around my finger, and, as I drive, I drum the fingers of my left hand against the steering wheel in violin-fingering patterns. It doesn't hurt. I'll be able to play.

That night at the rehearsal I drove 8 hours to get to, I get into an argument with a friend about page turning. She is right, the page turns in one place during the Saint-Saens are too loud, and distracting. But the way she expresses herself leaves a lot to be desired. "It's your job!" she yells at me. "You need to say something. You need to fix it!" She's in her 80's, a long-time member of the orchestra, someone who could tell you a million stories (and who sometimes does) about soloing as a teenager, about playing with the Boston Pops. She knows my violin teacher and played with her in another local symphony many years ago. Later, before the concert, we will hug and make up and walk on stage as friends. But right now, she's just here haranguing me about a page turn. I have a headache and I'm not really processing what she's saying. I want the princess' calm. Even more, I want a nap: 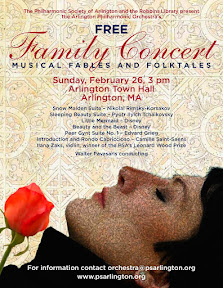 Like a good orchestra member and volunteer, I put up these posters at work and around town. This one is beautiful as always, but there is something about the princess. For one thing, she's kind of mature. For another, her hair seems too contained. It's short and it's not unruly. I keep looking at her, ostensibly sleeping her way through eternity, in the elevator, in the store window, on the Philharmonic Society's Facebook page (which I am in charge of). Then there are those discussions about concert publicity we have at board meetings: "Do we need to keep sending out flyers by US mail?" According to the survey we did last year, our audience demographic is skewed toward females over 65, many of whom still read newspapers and other print media. I am asked, "How's the Facebook page doing?" It turns out that some people didn't even know we had a Facebook page. I dutifully send around another group email announcement, and am gratified to see the "likes" climb over 100. There are online bulletin boards to be posted to, little local newspapers, community media centers. We made the list of "Family Fun things to do in Boston," metrowest suburbs. (I know, I got the email.) The princess, well, she just sleeps through it all.

On the concert day, I notice, again maybe for the first time, that I'm not the only one who is anxious. Our conductor, an utterly charming man with a droll sense of humor and one of the best conductors I've ever worked under--well, the top of his head is a little shiny under the town hall lights. My stand partner, a kind and generous spirit who always has an encouraging word for everyone--she put our stand way up high and, like me, left the pencil back in the room where we left our cases (although I did remember to xerox, print out, and tape in, the music to fix the offending page turn). The amazing, Heifetz-like 12-year-old soloist--her nails are bitten down to the quick. All of them. In case I needed confirmation that our stand is too high, during the first piece of the warm-up, while we're playing, the principal cellist walks over, behind the conductor while he's conducting, and tells us to put the stand lower. She can't see us. This non-plusses me for a second; I'm still not, at heart, used to people wanting to see me. And I'm still not, at heart, used to seeing other people as having their little anxiety "things," the way I do. In my mind, I'm the only one who screws up Saent-Saens, who cuts her important-for-the-violin finger while making breakfast, who puts the stand up too high. But really, I'm not.

The concert itself is a relief, maybe even a triumph. Things are loud, I have to say, and a little chaotic. This is the free concert advertised in the "Fun Family things to do in Boston" section of the e-newsletter, not the BSO, the NEC, or the Boston Pops. As an introduction to the Grieg, the conductor shows the kids two little Scandinavian trolls that have significantly more hair than he does. They are a big hit. I manage to hit most of the notes in the Hall of the Mountain King, extended 7th position section. At one point during the performance, I see out of the corner of my eye, a toddler come toddling up to get a closer look, followed by his mom who is kind of crawling after him. The soloist does so well that she plays an encore, Kreisler Tzigane, to a second standing ovation. Afterwards, when the audience comes up to mingle with the musicians, I introduce my daughter and her bass-playing friend to some bassists. And two delightful girls who are just learning Suzuki have some questions for me. They are in 3rd grade and doing the dreaded Twinkle Variations. One of them in particular seems more interested in playing in the orchestra than soloing. She lights up visibly when I tell her that I have played solo sometimes but that I really like playing with a group better. Another one, a violist, wants to know if the violas ever get any good parts or if it's always just the violins. I tell her about Mozart's viola quintets, in which there are two violas and the violas are on an equal footing with the violins and the melody is shared and passed back and forth. "Mozart played the viola," I tell her. She seems to like that answer too. Sure, it's a cliche to say it's all worth it, but it is. Each concert is its own little Musical Fable.

From Tom Holzman
Posted on March 1, 2012 at 7:22 PM
What a wonderful blog post and experience to recount. Nothing comes as easy to us as it does to 12-year old wunderkinder who only have to get out there and do what is second-nature to them. Your post reminds me of a story I heard about the first performance of young Anton Reicha's symphony. He was very nervous and was running around as the orch was setting up, trying to make sure everything was in order. During his peregrinations, he managed to cause a bassoonist to swallow the mouthpiece and tore the bridge off of the viola that Beethoven, who played in the orch, was playing. He ended up creating more than a little havoc. Luckily, your experience seems to have gone relatively more smoothly.

BTW, buy yourself a bagel guillotine. There is no excuse for injuring yourself cutting them. In fact, the most common ER injury is guys who slice the palm of their hand trying to slice bagels while holding them.

From sharelle taylor
Posted on March 1, 2012 at 11:00 PM
the program looks like a lot of fun. I you tubed Ilana Zakz - borhter that little girl can really play, can't she. there are clips with her friend and pianist, same age, and she can really play too! Congrats on coping and enjoying despite anxieties.
From Karen Allendoerfer
Posted on March 2, 2012 at 2:49 PM
LOL, Tom, those stories about what went on in orchestras of the past are always a hoot. I tell myself that concerts like this, where people aren't dressed up and there's a bit of of talking and noise and movement in the audience, have a certain authenticity to them that's nice.

Sharelle, yes, I saw a couple of those YouTube clips as well. I love getting to hear these young players before they become famous. In 10 years I think the tickets to hear Ilana Zaks are going to cost a lot more! She studies with Donald Weilerstein at the NEC, and he was there at the dress rehearsal.