How did it get to be December 29th already?  This has been a rather tough fall, work-wise, but I am grateful to some wonderful co-workers for helping me through it.  I haven't been able to blog, or to play the violin, as much as I would like.

Back in September, I took on the challenge of playing the concertmaster solo for the Tchaikovsky "Mozartiana" suite.  The concert was on November 7th. 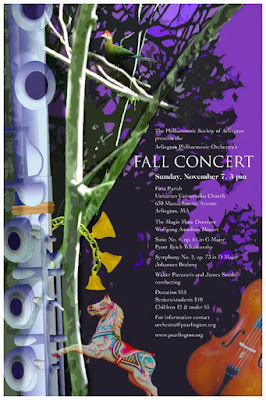 Unlike the other 2 pieces on the program, this piece was completely unfamiliar to me until I played it.  One of the things I love about playing in an orchestra is being introduced to new music.  While I always enjoy looking up new pieces on wikipedia, I think this entry is a  little off-base.  Especially the 3rd movement, the "Preghiera" is gorgeous, with a lovely cello solo.  However, one thing I will say, is that, in spite of its nickname, it sounds nothing like Mozart.  Tchaikovsky can't sound like anyone but his glorious self.  The lead-up to the solo, which is one of several variations on a theme, has bells worthy of any sugar plum fairy.  After the shimmering Preghiera and jaunty bells, however, come the 16th notes.  In our edition, those 16th notes, at the top of the page just as it is turned over, herald the "oh c**p, here it comes" feeling.

When I first started practicing this, I found that A Recording is Worth 1000 Words.  I ended up practicing in front of a mirror, regularly.  Not only for bow distribution, but also for keeping the bow centered and straight.  You never get too old for the basics. Further along in the process, I took my violin to a work retreat, and practiced while everyone else was out hiking:  Adventures with Pyotr Ilyich, I: the Retreat, Fall Colors, and the Hurdy-Gurdy.

The most obviously difficult part of this piece, for me, was the arpeggios at the end.  The first ends on B and the second ends on D.  When I was first practicing them, they both pulled towards C in my ear:  the B was consistently sharp and the D was consistently flat, as much as a half step in each case.  And, initially I didn't hear that as the problem--I just thought they sounded kind of the same, fuzzy, and bad--until I started working with the electronic tuner consistently.  Then, over time, each one started to take on a different character and flavor, and I started to be able to hear that difference between the two, and it made musical sense to me why Tchaikovsky would end the first one on B and the second one on D.  It's hard to explain any better than that, but I don't think I would have gotten the same idea or understanding from practicing straight arpeggios in different keys out of context.

Somewhere in there, my violin teacher introduced me to "wristies," fingerless fleece gloves that allow violinists to keep their hands warm while playing.  I'm wearing them in the concert video.   I wish I'd discovered them earlier!  Cold hands have been a personal scourge of my intonation and vibrato for as long as I can remember.  And having cold hands has also resulted in a particularly discouraging sort of feedback loop, in which I hear myself playing with the stiff vibrato and poor intonation, and thereby get more nervous, resulting in even colder, stiffer hands, and worse intonation and vibrato, and so on.  Having the wristies is helping me short-circuit that nasty loop, and is honestly helping me be less nervous.  They're better than almost anything else I've tried so far.  A couple of people asked me, with concern, if they were a brace or if there was something wrong with my wrist.  Thank goodness, no--much less than before, anyway.

The biggest reason I waited to post this video, aside from getting snowed under at work, is that there are a couple of better copies out there and I was hoping that maybe one of those would work out.  One of them, however, turned out to have a really nice view of the back of my head.  So, this is the video taken by my daughter.  There is one painfully out of tune section at the beginning that I just want to mention up front and get out of the way.  All I can say about it is that thank goodness I didn't let it mess with my head.  Rather than getting discouraged by that early intonation snag and sucked into a downward spiral, I was able to recover and move on.  So sometimes maybe it's a blessing not to hear intonation so perfectly in real time, but wait to cringe until you hear the recording.  In fact, I seemed to hit my stride and get better as I went along.  I didn't wait, though, for the high D at the end.  I cringed.  My daughter said, "mommy, you made a scary face!"

A local online newspaper, the "Arlington Patch," covered the concert, and they interviewed our percussionist, Joe, and myself, which you can see here.  The reporter asked me what playing in the orchestra "meant" to me, and I was babbling, but it's true.  It is something quite wonderful to have music back in my life after 8 years off.  I will say goodbye to 2010 with regret, but look forward to 2011 with happy anticipation.

Happy New Year to you, too.  I had never heard of wristies and, when I first saw the youtube, thought you were using some kind of splint because of wrist problems or carpal tunnel.  Glad to know it is simply an issue of keeping warm.  Do you have Reynaud's Syndrome?

Keep up the good work.  Although you may think you babbled in the Patch video, you exuded the sort of I-love-what-I-am-doing aura which hopefully defines us all in our musical endeavors.

I didn't know there was a syndrome with a name before reading about it here on violinist.com.  I tend to sit on my hands to keep them warm, or, when doing cold weather sports, I like to use those chemical hand warmers.  My impression is that I don't have a bad enough case to reach syndrome level, but over the years it has definitely impacted my violin performance negatively, especially in solo situations.

"Mommy, you made a scary face!"

Out of the mouths of babes...

Good for you for posting it!!! You did a really really good job! I wish more people would get over their fear of criticism and post videos or mp3s of their playing here. :) Once again, congratulations!

And I didn't think you babbled at all. I joined an orchestra again in 2010 after three years of not being in one and I felt the same way you do.

Also, thanks for mentioning those wrist warmers!! I have some because I have thyroid issues and my hands tend to get ice-cold pretty easily. But I've never worn them while playing. This seems like it could be a great solution and I don't know why I didn't think of it sooner.

Well done! That was a great performance and I loved the interview bit! :)

I also have some writsies! I use them because it is just far too cold in the winter where I live and heating in homes is a big issue. For me, they work wonders!

Eloise, I got the wristies right around the time when you had your discussion thread going.  My teacher wears them also. I wear the right hand one as advertised but I don't put the left hand one over my thumb, I find that too confining, especially for a piece that goes up above 3rd position.  I just pull it up to the bottom of my hand/top of my wrist.  They're not a panacea for everything, of course, but now that we're in the thick of winter (here in the Boston area), they're very useful.