The First Concert: Students and Teachers and the Bonds we Share

December 9, 2018, 2:28 PM · As violin (indeed as all instrumental) teachers I think it is natural to become fond of and develop bonds with our students in a way that is maybe not the case with teachers of certain other subjects. I am sure that my own experience in this matter will resonate with many others in my position. Learning an instrument requires an intellectual, physical and emotional response from both teacher and student that becomes symbiotic. 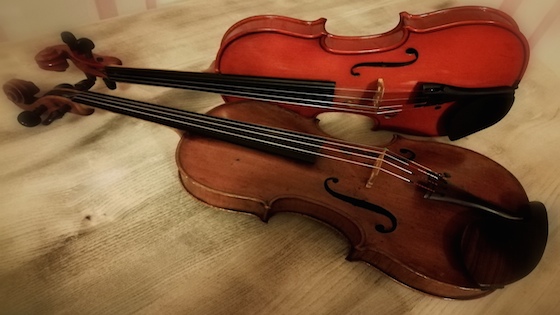 Our job goes beyond just teaching our students the violin; it is also about helping them to appreciate and understand music in general, hopefully inspiring them to develop a genuine love of music and the instrument they have chosen. I have memories of the teachers that inspired and guided me and I want to try to be that person for the students who come to me.

I have wonderful, happy memories of concerts with the violin students I have taught over the years. I believe very strongly that concerts where they perform together as a group, sustaining and encouraging one another through a shared love of making music, is the best stimulus and goal you can give them. I remember each concert vividly and separately. Strangely enough, despite the passing of the years, they do not roll in to one collective memory.

There was the time my students were performing Vivaldi’s Double concerto in D Minor in the church of San Latino when all the lights went out and, plunged into complete darkness, they continued playing to the very end without a single mistake or hesitation. They had no idea they knew the piece from memory until that moment.

There was the time we decided collectively that for our summer concert in Piazza Garibaldi we would all dress in red and white and ended up looking like a troupe of Neapolitan ice-cream sellers. There are so many memories, all good, but I have to mention the very first one, which was our first Christmas Concert.

Music was always the best part of Christmas for me from my very earliest memories. I founded my Divertimento Academy Violin Orchestra when I was 26 and living in Italy in the city of Crema. The first performance they ever gave was in the cathedral for midnight mass. I had arranged a whole load of music for them to cater to their specific abilities. I had complete beginners on the violin as well as a few slightly more advanced students so the group was a real mix of ages and levels of preparation. I needed a rehearsal room big enough and the priest of the cathedral in Crema at the time, Don Emilio, offered to let me use the room behind the cathedral free of charge, on the proviso that the children would play for midnight mass.

When I told him what they had been practising and could do I thought he would tell us not to bother, but in inimitable Don Emilio style he announced in his huge booming voice that Rudolph the Red Nosed Reindeer would be just perfect for Holy Communion. That was their first public appearance and they were really excited about it. I had two 6 year olds that had just started a few months prior to this and one of them, Matteo, fell ill on the day of the performance. He was so poorly with a high fever, but so upset at not being a part of it that he insisted his dad bring him along.

So Matteo, in his pyjamas and wrapped up in a blanket in his dad’s arms, sat and listened. He never missed a single performance from that day on and was a stalwart Divertimento Academy member to the very end. He is grown up now and has moved to Dublin. He loves music, especially Irish music and plays his fiddle regularly in sessions all over Dublin. The other 6 year old who he shared a stand with is now a professor of Double Bass in a prestigious university in America.

As I prepare for the latest in a long line of Christmas concerts with a new generation of young violinists, I recognise familiar feelings surfacing. I am still in touch with almost all the students I taught over the years. I feel honoured to have been such an important part of their lives and I feel that through these concerts and our shared experiences we share a bond that will never be broken.

December 10, 2018 at 03:30 AM · I think the reason violin teacher bond with their students is because of the one-on-one nature of the teaching and the length of time over which instruction occurs, often many years. Much the same applies to mentoring graduate students. I meet with my students several times per week in the beginning, less frequently toward the end, but the doctorate typically takes 5 years or so. Obviously the relationship is different when you're dealing with people in their mid-20s compared to little kids.

Regarding inspiring students to love music and violin playing generally, my suggestion, having seen many teachers and styles of teaching, is: Teach with your violin! Play duets with your students!

December 10, 2018 at 09:59 PM · Learning to play an instrument is kind of unique in that it is one of the few times that student and teacher both practice and do the activity. Few of my school teachers wrote, or did science, or researched history,... Only some of my college professors were really active in what they were teaching.

At my age of 30 my violin teacher (not that many years older than me) I realized from the onset that we're in it together and he is struggling (albeit at a different level) with the problems of playing the violin. Doflein and all those duets helped.