A Taste of life in an Italian Orchestra: A Gastronomic Perspective

November 25, 2018, 10:36 AM · Playing full time in a professional orchestra is a way of life that from the outside can seem very different from reality. You spend more time with your orchestral colleagues than you do with your nearest and dearest and they soon become a sort of extended family.

I was a violinist for a number of years with an Italian Orchestra, A. Toscanini: L’Orchestra Sinfonica dell’Emilia Romagna. We played all over the region of Emilia Romagna that stretches from the Apennines to the Po valley in the North.

Effectively we were a touring orchestra, often spending hours on the orchestra bus being ferried from one venue to the next; so it’s not just a job, it’s your life. I was lucky to play in some of the most beautiful theatres in Italy, if not the world, performing a huge variety of symphonic, operatic and ballet repertoire. We would arrive at our destination with enough time for setting up and often a rehearsal and that would mean that frequently you had to get your dinner somewhere. 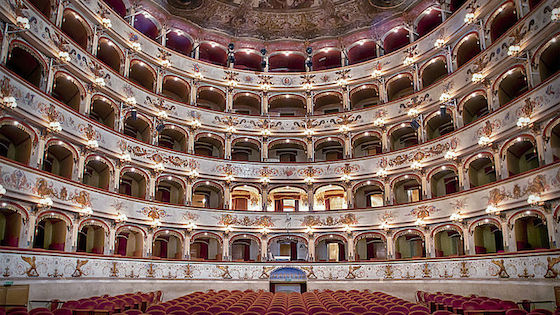 Living in Italy you begin very quickly to realise how important food is to the average Italian. Each area of Italy has its own specialities, some of which never leave the region of their conception, so in order to taste them you have to be there.

Now, I am not a foodie and before I arrived in Italy I couldn’t cook and wasn’t really interested either. However, when you are thrown together with your co-workers for weeks on end, travelling, hungry and sometimes bored, just waiting for things to happen, you are introduced to new things.

I’m a picky eater and also a vegetarian so I did struggle sometimes to find things that I would like, but Italian cooking is intrinsically a peasant cuisine, albeit an excellent one, so I usually found something and it was generally very good. If we went to Ferrara, my friend Fabio knew the best place to eat “pasta e fagioli” soup. I would look forward to our Ferrara gigs in anticipation of my plate of soup.

Cremona, on the other hand, is definitely the place for risotto, not just excellent violins. My colleagues were always happy when we headed to Brescello, the home of Guareschi’s Don Camillo, as the town would lay on a spread of locally sourced salame, prosciutto, torta salata, melone and lambrusco wine. In Piacenza, the theatre bar had the best pastries, so a wee visit to the bar during the interval was a must.

Parma itself, where the orchestra is based is so renowned for its cuisine, people travel for miles to eat there. Having a sweet tooth I loved the idea of breakfasts in Italy at the coffee bar. Basically you get to eat cake for breakfast. Wonderful, in my opinion, and sometimes if I just didn’t fancy anything on the menu for dinner I would simply have another breakfast. The first thing I discovered in Italy though was a true love of all things ice-cream. So the search for the best ice-cream in Italy began and tastings were essential wherever we went.

Many of the core members of the orchestra are from Parma and the surrounding areas and they consequently love their food and can be resistant to the idea of eating foreign food. We were travelling to Russia for a tour one year and my colleague Luca was almost in tears at the airport at the thought of not eating tortelli for a couple of weeks. The tour was with Luciano Pavarotti. Now, he had sent ahead a lorry full of food, and his own personal chef was travelling with the orchestra, but the rest of us had to make do with what was there. This was a strange time in Russia. It was 1990 and you could feel the change in the air. The hotel we were staying in was extremely run down and there was very little food to be had even for tourists. Within 24 hours people started getting sick with food poisoning. We discovered that the bottled water was 3 years out of date and smelled of sulphur when you opened it.

As the days went on, more and more people fell ill. I managed to stay healthy, partly because I ate very little and avoided the water. The only alternative to the water was vodka and Hungarian wine. So we collectively staggered onto the stage each evening and tried to get through it the best we could. Pavarotti however, was in fine fettle.

I am still not much of a foodie but I am glad for the times spent touring and tasting and being introduced to new flavours, and when I make pasta e fagioli soup I still see the trattoria and the theatre in Ferrara (see picture) and remember my times as a violinist in an Italian touring orchestra.

November 26, 2018 at 12:52 PM · Most recipes for pasta e faglioli that I have read call for pancetta or bacon but if course thats not a necessity and might even be an Americanization. I nade it a week ago. :)

November 26, 2018 at 08:30 PM · Hi Paul, It may be an American thing, but again, it may change from place to place. I made a homespun version yesterday with pumpkin, roasted yellow peppers and kidney beans... Definitely not authentic, but very delicious all the same

November 28, 2018 at 04:58 PM · "there was very little food to be had even for tourists. Within 24 hours people started getting sick with food poisoning."

You should try the Ukranian food, if you haven't done it yet. You will certainly find it delightful)).

November 28, 2018 at 06:31 PM · I'm sure it's delicious. I'm just talking about a specific time in history and a specific set of events. I'm sure our experience was just very unlucky. I would love to go back one day.