The Martinu Quartet in Blacksburg

September 28, 2018, 11:00 PM · This evening the Martinu Quartet regaled New River Valley music lovers with a program of mostly Czech composers in the season opener of Musica Viva of Southwest Virginia. The Martinus, who hail from Prague, opened with a brilliant, lively Mozart Divertimento (KV 136), showcasing the virtuosic treble voice of first violinist Lubomír Havlák. Havlák is quite an engaging performer with quirky right-shoulder movements and other “body English.” I would rate him a solid 6 on the Showmanship Scale (where Geoff Nuttall and Ray Chen would be 10’s). Second violinist Libor Kanka played the “straight man” while matching Havlák perfectly in the parallel scale passages of the Mozart. 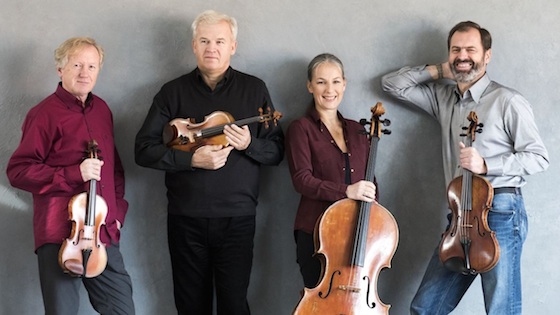 The scene then shifted to abstract expressionism with the beautiful and haunting Quartet No. 1 of Erwin Schulhoff, composed in 1924. This quartet in four movements featured long passages of col legno, muted ponticello, and false harmonics. I’d encourage any adventurous quartet to consider the Schulhoff. While decidedly “itchy and scratchy” in comparison to Mozart, the themes and overall compositional structure were surprisingly accessible to the listener. (I also wondered if ponticello isn’t a whole lot easier if you can just ride your bow against your mute.)

The first half of the program concluded with a selection of four of the Dvorak Cypresses interspersed with (thankfully) brief readings of the most saccharine poetry, which was historically associated with the pieces (that they could have inspired even a young Dvorak seems improbable). The Dvorak featured many themes from the lower voices played with notable sensuosity and balance by violist Zbynek Padourek and cellist Jitka Vlasankova.

During the intermission I discussed with a friend the difference between the bright first violinist’s instrument and the second violinist’s darker tone. We agreed that the inner voices blended so smoothly that sometimes it was hard to tell just by listening whether a passage was being played by viola or second violin. My own perception of Dvorak is that his music is very busy – a carpet of sound with little space. But, it works.

After intermission the quartet continued with the beautiful A-flat Dvorak Quartet Op. 105 which Dvorak started writing in New York and finished in Prague after taking a break to write his entire G major Op. 106 quartet! During the Lento movement I focused on Havlák’s playing and enjoyed a lesson of several minutes in how to develop a wide palette of color through the variation of vibrato. The quartet received the now-customary (but still deserved) standing ovation and responded with Dvorak’s A-major waltz as an encore.

After the recital I had the opportunity to talk to Havlák briefly at a dessert reception about his (and Kanka’s) choice of instruments for quartet playing. He said they once tried trading violins for a rehearsal. I encourage anyone to see the Martinus should they come to your area – they are not to be missed.