October 3, 2018, 12:44 PM · On Sunday September 30, 2018, violinist Itzhak Perlman and pianist Rohan de Silva performed a recital in the beautiful Fife Theater (Moss Arts Center) on the Virginia Tech campus. Perlman zips himself briskly on-stage in a clever black scooter, turning at the end toward the pianist so that he can sit "side-saddle" facing his music stand. We had good center-orchestra seats so I was able to watch both violinist and pianist well.

The recital opened with a sunny Leclair Sonata in four movements, Op. 9 No. 3, in D Major. On the whole, Perlman seemed most at home in the slower first and third movements, where he could enjoy his rich vibrato and even indulge in a few “Heifetz slides”. De Silva’s reading was light, fresh, and perfectly complementary. The fourth movement surprised me with many unexpected but agreeable variations in tempo. 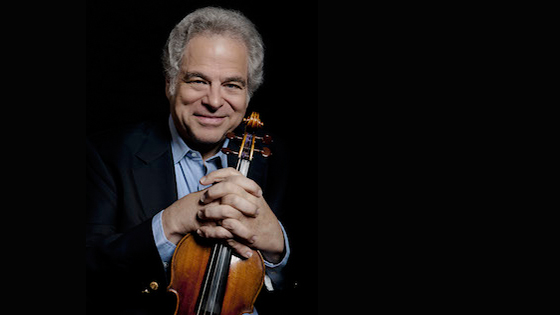 The first half closed with my very favorite piece in the entire violin repertoire – Franck’s Sonata in A Major. I try to “take a lesson” from every recital I attend. While it's hard to know where to begin when thinking about what one will "take home" from a Perlman recital, in the first movement of the Franck, after de Silva’s perfectly placid introduction, Perlman suddenly boosted the tempo – but only for a measure or so before stabilizing again. While the phrase rises there, one doesn’t expect the soloist to push it that much. But it worked, so I decided to let the afternoon’s lesson derive from their frequent use of significant rubato in places I wouldn’t have expected.

De Silva’s expression of the melodic lines in the later movements was especially deft – always singing but never shouting. Perlman opened the fourth movement very softly – what I call PPP on the violin (projecting pianissimo!), an especially charming musical moment. From there the familiar melodies gradually rose and sailed gaily to the triumphant ending of the sonata.

During intermission I chatted with the piano tuner (Harry Doss, who also tunes my piano at home), and he told me that he had to tune the Steinway four times in the two days prior to the recital. I asked him if he needed to check the piano again at intermission, and he said he’d get a text if so. Sure enough, a few minutes later he was at the piano, perhaps to correct a unison; I failed to ask him afterward. And by the way the concert program gave no indication of which instrument Perlman was playing that evening -- too bad.

To open the second half Perlman and de Silva chose Stravinsky’s curious Suite Italienne. I was not previously familiar with this piece. The slower movements seemed reminiscent of Handel and Vivaldi, while the lively Tarantella and Scherzino movements were more recognizably modern. The Tarantella is a serious bowing study. Perlman is not afraid to expose some roughness in his spiccato and especially his ricochet. In the last movement there was a fast passage of repeated 16th notes in the piano, which was executed perfectly cleanly. I must have said “hmm!” or something because a few of my neighbors glanced at me.

After an enthusiastic ovation, the pair settled back in to announce five encores from the stage: Kreisler’s Tempo di Minuetto followed by his arrangement of Tchaikovsky’s Songs Without Words, the A Minor Caprice of Wieniawki, the Theme from Schindler’s List by John Williams (a Perlman staple), and finally the Joachim arrangement of Hungarian Dance No. 1 by Brahms. Even in the fast passages, with Perlman playing, one can distinguish every note and hear that it’s in tune. (How does he do that?)

All told it was a thoroughly enjoyable recital. In the past few years we have been blessed to hear, in that space, Gil Shaham, Josh Bell, Emmanuel Ax, Yo-Yo Ma, and the St. Lawrence String Quartet, among other great shows including Jane Monheit and Maria Schneider. What will next season bring?

I envy you, it’s not likely that I will ever see him live. He seems to be quite seldom in Germany.

Perlman's coming to Denver this season, but they always inflate ticket prices when big names come in. Maybe I'll regret not going?