'Life without Music Is Unthinkable.' Remembering Leonard Bernstein at 100

November 8, 2017, 7:52 PM · The anniversary of the death of Leonard Bernstein on October 14 in what would have been his 100th year of life has me thinking about what made him great as a musician and a man. I admire him as a teacher, composer, performer, conductor, and a man who used music to bring people together. 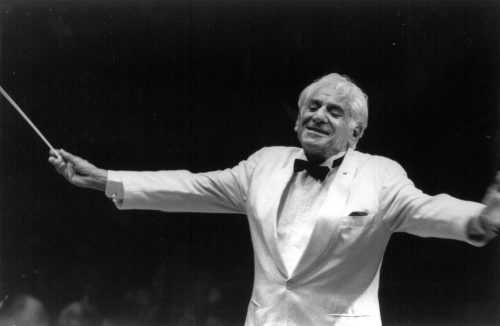 Bernstein was one of conductor Marin Alsop's mentors. Here she talks about the first time she met him.

I must admit that I'm a bit jealous of Marin Alsop because she attended the live performances of Leonard Bernstein's Young People’s Concerts even before she met him personally. I loved watching those programs on TV when I was a kid. Now I have a collection of 10 DVDs from that series, and I watch them over and over. Recently I discovered that more of these videos have been posted on Youtube, and I enthusiastically recommend them to people of all ages. This is teaching at its best.

Bernstein said that he loves words in addition to music, and most of his compositions include singing. The best known of these,"West Side Story," appeared first as a play and then as a movie, and the movie is still widely viewed thanks to rentals and downloads. Other compositions with words by Bernstein include Candide and Symphony 3. The play Candide premiered in 1956, but it was flawed in many ways and closed after a brief run. It was revived in 1973 with multiple changes, notably the replacement of the original libretto, and this time, it was a great success.

When the Kaddish Symphony was first performed, Bernstein was not happy with the narrative, and the critics bombed it. When he finally, after much effort, convinced Simon Pisar, a remarkable man who was an alumnus of both Auschwitz and Harvard, to rewrite and then recite the narrative, the symphony became a masterpiece.

Bernstein was also an outstanding jazz pianist. In this clip, he plays piano and conducts an orchestra simultaneously for a beautiful, lively performance of Gershwin's "Rhapsody in Blue." I find this performance spellbinding. I just can't walk away from it.

I first realized what a great conductor Bernstein was when I attended a concert in which he conducted Elgar's Enigma Variations, a piece that I didn't particularly like. However, when Bernstein conducted it, I loved it. That says a lot about him. I love so many performances that Bernstein conducted that It's very hard to choose one to include here. I decided to focus on his conducting the final movement of Gustav Mahler's Ninth Symphony for several reasons. Bernstein was responsible for a comeback of Mahler's music, which had been neglected for years. I had a long lived antipathy to Mahler's music, derived in part from my experience playing second violin in his Symphony #1 (a dismal part to play) and, more strongly, my perception that Mahler's music was just too big for me to relate to.

Once again, Bernstein made me love this music by conducting it and talking about it. The following video clip shows him conducting and explaining the very end of Mahler's Ninth. That was quite a journey -- walking with a tortured man to his death. I would be scared to take that walk by myself, but Bernstein helps me by showing me the surrender and peace at the end of life.

Bernstein conducted with his whole body and his whole being. To watch him conduct is to see the music embodied. He becomes the music he conducts.

It takes a special talent to laugh and make others laugh about one's personal, artistic predicament. Bernstein once had a real predicament when he conducted a piano concerto in which the pianist was the notoriously eccentric Glenn Gould. Bernstein and Gould had completely incompatible views on how the concerto should be played, and Bernstein deferred to Gould in the performance. Bernstein preceded the performance with a disclaimer in which he spoke about his need to "submit to a soloist's totally new and incompatible concept. " This speech became controversial although both Bernstein and Gould always said that they accepted it. Prof. PDQ Bach, aka Peter Schickele, referred to it when he presented his Concerto for Piano vs Orchestra. 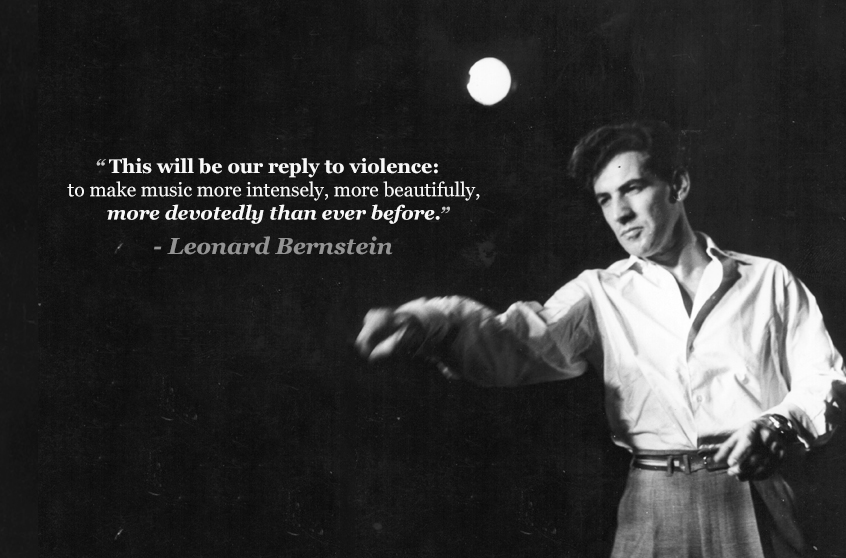 Bernstein was a political activist through his music and in other ways. After President Kennedy was assassinated, he said, “This will be our reply to violence: to make music more intensely, more beautifully, more devotedly than ever before.” He was active in his support of many causes, including freedom from dictatorship in Chile, the Black Panthers, civil rights under the leadership of Dr. Martin Luther King (he marched in Alabama), opposition to the War in Vietnam, support for Spanish Civil War refugees, and more.

Leonard Bernstein revealed himself and his thoughts on music vividly in his writing. Here are some quotes from him that I particularly like.

"Music, because of its specific and far-reaching metaphorical powers, can name the unnamable and communicate the unknowable."

"Stillness is our most intense mode of action. It is in our moments of deep quiet that is born every idea, emotion, and drive which we eventually honor with the name of action. Our most emotionally active life is lived in our dreams, and our cells renew themselves most industriously in sleep. We reach highest in meditation, and farthest in prayer. In stillness every human being is great; he is free from the experience of hostility; he is a poet, and most like an angel."

"To be a success as a Broadway composer, you must be Jewish or gay. I'm both."

"Life without music is unthinkable. Music without life is academic. That is why my contact with music is a total embrace."

I'll end as I began, with a clip of Marin Alsop talking about her mentor, Bernstein. She speaks of his greatness as a musician and a human being.

November 9, 2017 at 04:05 AM · I so enjoyed reading this, Pauline! What great quotes to finish it with, too. Will check out the clips you have linked here, too.

November 9, 2017 at 07:14 PM · Thanks, Terez. Please do check out the clips. The music and spoken words really complement my text.