'Imagination' - an interview with Kelly Hall-Tompkins

January 21, 2014, 11:51 PM · “…if you do follow your bliss you put yourself on a kind of track that has been there all the while, waiting for you, and the life that you ought to be living is the one you are living. When you can see that, you begin to meet people who are in your field of bliss, and they open doors to you. I say, follow your bliss and don't be afraid, and doors will open where you didn't know they were going to be.”
– Joseph Campbell 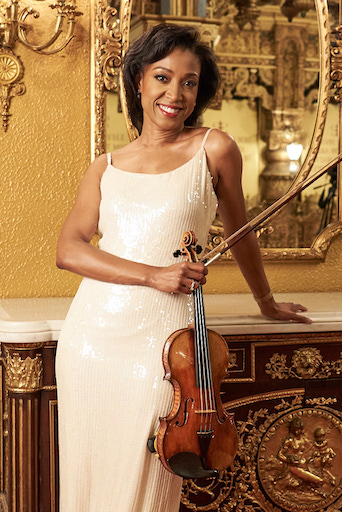 If there is any violinist whose life and work demonstrates the validity of Joseph Campbell’s words, Kelly Hall-Tompkins is that violinist. One of New York’s most in-demand violinists, Ms. Hall-Tompkins is considered “a shining example” by her colleagues, having established a career that includes solo, chamber music and orchestral performance as well as making significant contributions to the lives of others through her recordings and humanitarian activities. In a telephone conversation that took place shortly after the 2013 Gateways Music Festival (during which Kelly, cellist Troy Stuart and pianist Terrence Wilson gave a dynamic and compelling reading of the Beethoven Triple Concerto under the direction of Michael Morgan), Kelly spoke about Music Kitchen, many upcoming projects, the music of Eugène Ysaÿe and the importance of staying true to one’s deeper imperatives.

“If you decide to go into music, you must do it because you HAVE to do it and that your soul calls you to do it,” Ms. Hall-Tompkins said. “Music is not one of those things that you can take casually.” This philosophy has served Kelly quite well, and her list of accomplishments is a living testament to a well-considered life.

In addition to having played over 150 concerts with the New York Philharmonic after successfully reaching the finals in auditions held by that orchestra in 1994, and having performed extensively throughout the United States, Japan and Europe with the Orpheus Chamber Orchestra, Ms. Hall-Tompkins is a tenured member of the New Jersey Symphony. Ms. Hall-Tompkins is currently on an extended leave of absence from the orchestra while pursuing her solo and chamber music career. The winner of a Naumburg International Violin Competition Honorarium Prize, Kelly has been featured as soloist with orchestras including both the Dallas and Jacksonville symphonies and the Philharmonic of Uruguay. She is also a founding member of the Florida-based Ritz Chamber Players, an ensemble that has performed to critical acclaim throughout the United States and Europe.

Kelly has also achieved success as a recording artist, and the perspective gained both through life and her dynamic career is partially the motivation behind her latest project, a music video titled Imagination that is slated for release in January 2014. “I have recorded and released two CDs to date. In the time between those releases, Tower Records disappeared – there are no ‘bricks and mortar’ places to sell CDs. In contrast, there is a continuously growing online streaming world. Being a part of the ‘MTV generation’, I was somehow overcome with the idea that video can be used to enhance and express what classical musicians are doing as an alternative recording process. “

YouTube has become a tremendous resource for musicians across the globe and subscribers can regularly view both Berlin Philharmonic and Detroit Symphony concerts via the internet; for non-operatic classical music, video streaming is still ‘a new wave’. “For classical music, the music video genre in particular, as a means of giving more artistic interpretation of the music, is still a new concept, and personally this a new element to my recording.” Collaborators on this project included a team engaged by William Caballero, a New York-based cinematographer whose documentary AMERICAN DREAMS DEFERRED was premiered nationally on PBS.

For this project, Ms. Hall-Tompkins visits the music of Belgian violinist and composer Eugène Ysaÿe – “the thinking person’s Paganini,” she said. “Like Paganini’s entire body of work, Ysaÿe’s six sonatas are highly technical, but they contain so much more to work with in color, imagery and fabulous harmonies. The sixth of these sonatas, which was dedicated to Spanish violinist Manuel Quiroga, is incredibly virtuosic - like Richard Strauss’ Don Juan but for one person! Having recorded the Ballade, I have remained very attracted to the one-movement statement, and was somehow overcome with the desire to record the sixth sonata.”

Ysaÿe’s hair-raising Ballade is one of seven works included on In My Own Voice, Ms. Hall-Tompkins’ critically-acclaimed 2008 release on the MSR Classics label that also includes Fritz Kreisler’s Recitativo and Scherzo (dedicated to Ysaÿe in friendship), the great Chaconne of J. S. Bach, and works by William Grant Still, David Baker and Josef Suk.

“Ysaÿe uses very large chords and incorporates the complex harmonic ideas that developed during his lifetime – almost reaching into jazz harmonies,” Kelly said. “That musical fact inspired me to include my own jazz arrangement of a very well-known film tune in this project.” To remark on Ysaÿe’s deep understanding of evolving sonorities shows an incredible depth of reverence for and understanding of the man who was regarded as “The King of the Violin”: during his life the Belgian master gave the first performances of over fifty works, that list including the violin sonatas of César Franck, Camille Saint-Saëns and Guillaume Lekeu, Ernest Chausson’s rhapsodic Poème for Violin and Orchestra and the string quartet of Claude Debussy.

In addition to her continuously expanding concert schedule, Ms. Hall-Tompkins is also the founder of Music Kitchen. Now in its eighth season, the seed for Music Kitchen was planted in February 2004 when Kelly was encouraged to play through a recital program for residents of the Holy Trinity Lutheran’s Men’s Shelter. Since its founding, Music Kitchen has expanded to include many shelters in New York City and has been chronicled by The New York Times, Chamber Music America, Strings Magazine and Spirituality and Health as well as other media outlets. The list of musicians who have contributed to this series includes Berlin Philharmonic principal oboist Albrecht Mayer, pianist Emmanuel Ax, violinist Mark O’Connor and jazz vocalist Rene Marie in addition to over 100 of New York City’s emerging artists.

“It’s an underfunded labor of love,” Kelly shared. For her, the creation and sustaining of such a venture has been enlightening in many ways: “It’s amazing the things that I have discovered, foremost being the reactions that people have had. Some shelter residents had never heard classical music before and some were knowledgeable about it, but all seemed interested and moved by the music, and a lot of the time people were excited when they saw musicians coming in. I never thought that I would administer a program, but when I see the benefit of it and the effect on people, I’m constantly inspired to keep going.” Ms. Hall-Tompkins’ commitment to this venture recently culminated in a successful fundraising drive, during which over $10,000 was raised to support new programming and other initiatives.

A staunch advocate of classical music performance and reaching new audiences, Kelly is keenly aware of the power of music. “When the economy took a dive in 2007, people were initially far less excited to see strangers arrive in their midst, but the music was also far more powerful then. At Music Kitchen concerts, people speak and write passionately that they have been profoundly affected by a performance,” she said. “While my small charitable organization doesn’t have the burden of ticket sales, my success with this program has shown me that classical music moves people on a grand scale and still has vast untapped potential with audiences.” The artists that have performed have been profoundly affected through their participation in this series as well: the New York Times commented that “the concerts have an air of authenticity and directness that sometimes does not exist in concert halls.”

“You can never stay the same after you broaden your perspective, both nationally and internationally either through reading or through direct exposure to many things,” Ms. Hall-Tompkins said while reflecting on the many experiences that have shaped her life. “Both my continued involvement with Music Kitchen and all of my international trips continue to add new facets to my music-making. Having performed across the globe, I can definitely say that music is an international language.”

“Much like the responses to classical music performances that I have witnessed through Music Kitchen, if there’s anything that I’ve learned from my travels to Europe, it’s that this music is as much my own as someone who was born in Europe.”