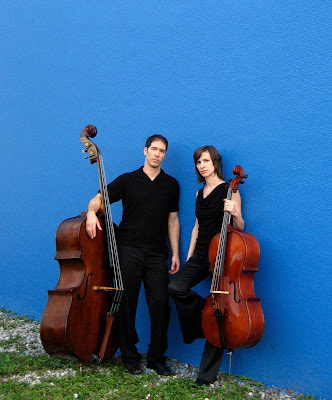 Cellist Nadine Trudel and bassist Gil Katz, who make up the duo NONA, are the featured soloists in the premiere of “TRIBAL” a work  for solo cello, solo bass, string chamber orchestra and percussion with the San Jose Chamber Orchestra on August 28 and 29, 2010.    Commissioned in 2009 by Barbara Day Turner, Founder and Music Director of the San Jose Chamber Orchestra and music administrator of the Utah Festival Opera, “TRIBAL” is Katz’s first orchestrated work.

“We’re both very excited”, Mr. Katz said about this performance and the commissioning project.   “A part of that is that we’ve seen how Barbara is during the summers – she’s always so enthusiastic.   It will be interesting to see her when she’s in full control, not doing traditional rep.”    Founded in 1991, the San Jose Chamber Orchestra has premiered over 80 new works, mostly by commission.

In discussing “TRIBAL”, Katz shares, “What I’m describing in the piece is the conflict between an initial reaction to an event – primal instincts – and the intellectual mind that discusses that primal instinct.    I do try to keep something organic in both the melody and the harmonies that people can recognize and relate to while the piece becomes more sophisticated.   This is music which has elements of classical, romantic, folk and Latin music, including both the Tumbao and Mozambique rhythms, which are very common in salsa and other Afro-Cuban music."


“This piece was composed over a period of six months,” Katz said, “because we work full time performing.”    Katz and Trudel, who have been married for twelve years, perform as principal bassist and cellist of the Sarasota Opera Orchestra, respectively.   Additionally, Ms. Trudel is a cellist with the Sarasota Orchestra and Katz performs with the Naples Philharmonic.   “This year we took a big load on – not only were we working our regular orchestra jobs, but we were really trying to jump-start our duo – gathering the repertoire, finishing other arrangements, setting up venues and our website.   All of the administrative things, we are doing ourselves.”


"In the meantime we also had the Sarasota Opera season,” Trudel added, “and a small tour through the Carolinas with the duo.”


Katz and Trudel have been both writing original works, including “Anhinga” and arranging short pieces for the duo, their very thoughtful body of transcriptions including “Sometimes I Feel Like a Motherless Child”, Ravel’s “Pavane Pour Une Infante Defunte”.  Their influences and inspiration have come from various sources, including their individual prowess as instrumentalists and the worlds that they have inhabited, including summers at the Cabrillo Music Festival.   “We found a lot of inspiration from that festival,” Trudel said.   “When we were there I felt very inspired to create.”    Katz spoke with great reverence about how being an orchestral musician has influenced his compositional mind:  “I play in an orchestra, so whether consciously or not I’m analyzing music all the time, listening to the finest orchestrations.”


Their work as a “formal” duo started almost by chance:  “I was preparing for an audition with the Metropolitan Opera Orchestra,” Katz reminisced.    “I was practicing one of those excerpts and my mind started wandering – and started jamming.   [Nadine] knocked on the door and I thought, ‘It’s okay, I’ll get back to practicing’, but she brought her cello in and said ‘I like what you just did’ – and we started jamming together!”


With the tremulous state of our economy and the affect having been felt throughout the arts community, most recently in Charleston and now in Detroit, there has been a seeming rise in the number of new ventures and arts organizations throughout the country.   Is winning an orchestral position “the answer” to achieving excellence and economic security, or should those with creative leanings take the required risks?   “I was somewhat insecure about this duo at first,” Trudel said, “but we thought ‘Let’s just take a break from auditions and do this project before it’s too late, and we’ll start doing auditions again in the future'.”


“I don’t think a lot of people realize how much dedication it takes to win an orchestral audition other than those doing the auditioning,” Katz added.   “You’re practicing all the time to play everything to whatever your definition of ‘perfect’ is.  Our thought [in starting NONA] was that if we directed all of that energy into our own project that maybe we would have that satisfaction.    We do, however, love playing in orchestras,” Katz said.   “All of those sounds inspire what we’re doing.”


This deep appreciation of their craft – both as instrumentalists and composers – is also evident during their performances and from audience reactions to their work. In their performances, Trudel notes, “We’ve performed for retirement communities in Florida and have played arrangements of Ravel and Gershwin.   However, the pieces that they come to talk to us about are the new ones, like ‘Mosie’s Caravan’, which we premiered in April,  or Gil’s other new works.   While we have been ‘warned’ against playing new music in these communities, the reaction to these works has been quite surprising and refreshing.”


“We want the audience to be moved when we perform, not for their focus to be ‘Wow, these guys can really get around their instruments.’   At this point,” Katz continues, “I am more flattered when someone comes to us and says that something that we played, either that we wrote or arranged, really moved them.   I like it more when you can reach out to someone…and music has that kind of power.”


In addition to the premiere with the San Jose Chamber Orchestra, NONA can also be heard performing original works and arrangements for cello/bass duo on Wednesday, September 1, 2010 at So Cha Café in San Francisco.     This performance begins at 8:00pm.   For more information on NONA, visit www.nonamusic.com.   For more information on the San Jose Chamber Orchestra, please visit www.sjco.org.

Orchestra playing is wonderful -- a fun, community experience. But the audition process can be so gruelling, it can pound the joy out of the music sometimes.

I enjoyed hearing about a couple who is uncovering their own musical voices, in their own way.  I love that their duo started so spontaneously, and I can just imagine knocking on the door to jam! Thanks for bringing this story to us, Sam!

Enjoyed reading this! Wish I'd had the time to slip out and catch a performance...