In the aftermath of the devastating earthquakes in Haiti, we in the United States again either witnessed or participated in compassionate acts undertaken by many members of the performing arts and entertainment communities. While in New York earlier this year (albeit for reasons other than attending a charity event), I found myself amazed at the number of events organized by members of the fashion community – particularly both the Hope, Help, Relief Haiti Dinner Benefit hosted by Donna Karan, Naomi Campbell’s Fashion for Relief and others. While news of Haiti has faded somewhat from headlines, there are still many events taking place throughout the nation by members of both the social justice and performing arts communities including Lang Lang's Carnegie Hall Benefit for Haiti (which raised $100,000 for UNICEF).

Since late February, a group of musicians in the Washington DC/Baltimore region has lent its hands to relief fundraising efforts. Two concerts from which a total of over $8000 has been raised have been presented by Musicians of Mercy, a non-profit organization founded by violinist Heidi Daniels and Robin Fay Massie-Jean, associate principal violist of the Delaware Symphony Orchestra and one of the founding members of the Opus Nine Ensemble. Having spent time getting to know Robin as both a friend and colleage sine 2007, I was honored that she agreed to give this interview and share her motivations for spearheading this effort. 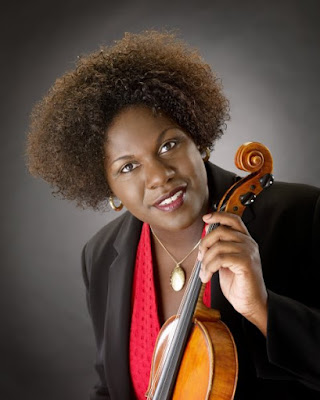 In a February 24, 2010 Baltimore Examiner article, you are quoted as having said (or thought) “enough was enough” upon reading about the earthquakes in Haiti and their aftermath. What exactly did you mean? Are you connected to Haiti in any way personally?


Though I am not personally connected to Haiti per se, I believe we are all connected as a people. Images of devastation and desperation flooded the news coverage in January 2010. Moved to tears, I wanted so badly to help in a meaningful way. I cannot not bear to imagine how many children have lost their parents, are without food, clean water, or shelter -- basic necessities which I take for granted each day. I could no longer watch nor read that coverage without doing my part. To me, the most natural way to communicate is through music and art. I decided to contact my friend, Heidi Daniels, and organize a benefit concert for Haiti. Within a few weeks of contacting Heidi, we planned the repertoire, booked our concert venue and had close to 70 musicians who volunteered to perform and rehearse. Thus, Musicians of Mercy was born.

Is this your first charitable effort?

Yes, this is my first self-led charitable effort. However, I have always had a heart for service.


How does this concept - Musicians of Mercy - “fit” into your life and philosophy as a musician?

I have always believed in the importance of serving those less-fortunate. It is not enough for me to attempt to master my instrument. All musicians strive for perfection in performance. After all, I've spent hours a day in the practice room over a single measure of music! Knowing that perfection is unattainable, the entire learning process gives the musician a sense of purpose and accomplishment. Music-making is just a metaphor for life. I continue to "fight the good fight" each day. I have my human flaws and limitations, but I strive to be the best woman, friend, teacher, mentor, daughter, sister, and mother I can be (Yes, I have a three year-old!). As artists, we have a great deal of power. Music can touch the innermost parts of the soul. Heidi and I realized that we can use our passion for music as a way to bring healing to Haiti. Therefore, Musicians of Mercy is a true labor of love.


Not only was your initial effort a success: Musicians of Mercy was invited to give a concert at NASA’s Goddard Space Flight Center on March 18, 2010. How did the Goddard invitation come about?

Interestingly enough, the NASA Goddard invitation was unexpected. Following several rounds of personal email invitations, one of my contacts expressed interest in having us do a benefit concert at his workplace. As a NASA Goddard employee and also being Haitian, he saw it as a way to unite the Goddard community for the same cause. He requested clearance from the necessary parties and we began planning our second benefit concert just before performing our first!


Are you pleased with the turnout for your inaugural concert in Baltimore?

I was very pleased with the turnout for our Baltimore debut concert. We had a very appreciative and generous audience for planning a concert on relatively short notice. Thanks to Sheena Martin's well-written article in the Baltimore Examiner, we had some much-needed publicity. In addition to Ms. Martin's article, a team from WBAL TV-11 News covered the beginning of our concert. I was not concerned with the number of people in the audience. Like an expectant mother, I wanted to see the birth of this concert which had been in the planning for weeks. With probably less than 50 people in the audience, we raised about $1300 for Save the Children -- not bad for a first effort. (Subsequently, the Goddard concert brought in about $7000 for the American Red Cross.)


I do know from having organized and performed in a few benefit concerts over the past few years that the organizing itself is quite the task. Has this been your experience? Were you and Heidi able to form a solid team?

Heidi and I have been "teammates" for years. We met as undergraduate music students at The University of Maryland, College Park, MD. During our first year, we were assigned to a string quartet. We got along so well that our group chose to remain together all four years. Our Choo-Choo String Quartet was known for wacky rehearsal techniques, engaging performances, and our shared passion for educational outreach. During that time, we learned each other's strengths, weaknesses, habits, etc. Therefore, we are fully equipped to collaborate on this project.

In the weeks prior to our Baltimore debut concert on February 28, we hit a few roadblocks. Record winter snowfall resulted in altered schedules for many of our performers. We were unsure as to whether or not we would have the personnel to keep the date we had booked at Old St. Paul's Church, downtown Baltimore. Also, we only had a month to plan, fund and advertise the entire concert. Many days, I looked at the roster, the schedule, the calendar, and the near-zero budget and thought, "How are we going to pull this off?" But, persistence and grace under fire helped us see it through to the end. Ironically, the concert was held the day after my birthday. It was the most memorable birthday for me in recent years!


Did your work with Opus Nine (an ensemble formed last year that played debut concerts in Baltimore, New York, and Philadelphia to critical acclaim) prepare you in a way for these efforts?

Absolutely! Alysia Lee and Jarvis Benson created a beautiful product in Opus Nine Ensemble. With their vision, they brought young talent together to re-invigorate classical chamber music and present it with vibrant, new energy. I watched them weather the early storms and growing pains while forming their new organization. While in its second year, Opus Nine continues to thrive and I'm grateful to have been there from the beginning.


You recently became the assistant principal violist of the Delaware Symphony, in addition to continuing your freelance activities throughout Washington, Baltimore and – is it Philadelphia where you record the video games?

HAHA!!! Actually, yes, I work with a studio orchestra that records soundtracks and clips for NFL Films in Mt. Laurel, NJ. It's a really fun gig! As a stuanch Pittsburgh Steelers fan, I enjoy knowing that I play a small role in making the music for my team!


How have you maintained the balance between your professional life and your home life – raising that beautiful daughter of yours?

Whew, I'd like to think that I'm doing my best to maintain a balance between home life and my professional life! However, as a musician, it's nearly impossible to "leave your work at the office." I think I will always struggle to find that perfect harmony. However, I can honestly say that my three year-old daughter gives me the greatest joy! There are times when I'm practicing and she just comes and tugs at my shirt, calling for my attention. "Mama, viola in box!" Haha, of course, I have to oblige! I've learned to be more efficient and focussed in my practice sessions. Furthermore, without the constant support of my family, I would not be able to pursue my passion for music. My mom has put her own career on hold to help me watch Samara while I am on the road. Her sacrifice makes it possible for me to have the career that I love. My life isn't perfect but it's certainly fulfilling!


What are your long-term plans for Musicians of Mercy, and for yourself?

Regarding Musicians of Mercy, Heidi and I will apply for non-profit status before the end of the year. With that comes a lot of other internal organization. We are also hoping to plan the next concert for this summer.

As for myself, good question! I strive to be the best violist I can be and desire a multi-faceted career. I want to play in a major orchestra's viola section. I will continue to take auditions over the next few years. I would like to continue teaching my beloved private students and expanding my studio. This semester, I had the good fortune of serving as a substitute viola professor at University of Delaware (Newark, DE) during resident viola professor, Andrea Priester Houde's maternity leave. It was an incredible experience which stretched me as a teacher and gave me the opportunity to mentor five undergraduate and two graduate students. I am grateful to have had the opportunity and would like to teach on that level again. We'll see what the future holds...


Where can we find out more about Musicians of Mercy and to whom can someone speak about making a contribution?

We are in the process of working on a website and such so all I can say is ... stay tuned! To make a contribution to Musicians of Mercy or for more information, please contact either Heidi Daniels or myself. You can reach us via email: musiciansofmercy@gmail.com.

Thanks for a great interview, Samuel! Kudos to Robin Fay Massie-Jea and to Heidi Daniels for pulling this off -- no easy feat to organize this kind of effort AND to be putting on the show!

This is wonderful; thank you for letting us all know about it!

Sam, I always know that when you post a blog it is going to be insightful/good/informative/great to read. This one was no exception. What a woman! So nice to read about people trying to make a difference in the world through their art. (And that category would include you.)

Terez - from you and Laurie, those are amazing and beautiful compliments, considering that you are BOTH writers and journalists!    Robin IS a wonderful person indeed!

Hello everyone, thank you for the warm welcome I have received!  It is very humbling to read everyone's comments.  Sammy, you are an exceptional friend and I am grateful to you for the depth and sensitivity with which you conducted this interview.  What an honor to be interviewed by you!  Thank you, fellow musicians, for the encouragement!  We can all make a difference! :)