August 16, 2020, 4:03 AM · This Sunday, August 16th, 2020 would have been Trendafil Milanov’s 111th birthday. Trendafil Milanov (1909-1999) was one of Bulgaria’s most important pedagogues, who left a legacy of dozens of world-famous musicians and a revolutionary violin method that changed the teachers and students' approach to the instrument. 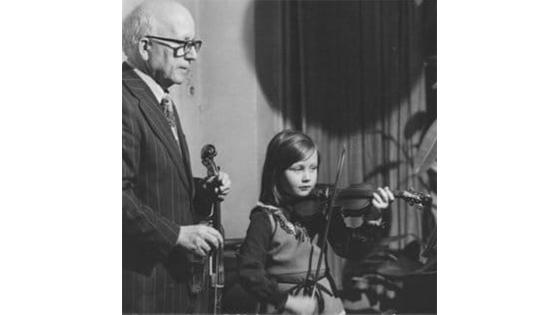 Trendafil Milanov was born on August 16, 1909, in Novo Selo, Bulgaria. He started studying violin at an early age and later graduated from the National Musical Academy in Sofia in the class of Nicola Abadjiev, the first teacher who introduced the Franco-Belgian violin school in Bulgaria.

Milanov was always fascinated by finding faster and more effective ways to teach the violin. When he was a young student, while studying long technical exercises, he observed a few of his friends practicing violin by ear. He was surprised by the much faster progress those friends made (at least at the beginning). Later, of course, they fell behind in their development because they were lacking the musical theory training needed for the development of a violinist. This observation gave Milanov the idea to start looking for the right balance between developing the ear and theory training for the beginning violinists.

Milanov researched the common violin methods of his time and started experimenting with his new ideas. In 1945 he founded the first music school in the city of Plovdiv and in 1950 moved to the Capital city, Sofia. There he founded a boarding school for talented children. Violin, cello, and piano were taught with great results, and a big part of Bulgaria's musical elite began their training at this institution. A few years later the boarding school closed because of political pressures.

Milanov continued his research to create a new way of music teaching as a director of the Sofia State Music School. In 1972, the first official Experimental Class of the Milanov Method was formed in that school. A team of violin, cello, piano teachers, and psychologists participated in the launch of the system. The results were extraordinary, and the method quickly spread to other music schools in Bulgaria. It was a huge breakthrough because it placed the teaching of an instrument on a completely different ground.

Milanov uses directions on the violin instead of positional movement only. The students approach the fingerboard in its totality from the very beginning and transposition is used as a tool for ear and theory training. All the learning process is adapted strictly to the age requirements of young children and everything is done through games.

For 15 years, hundreds of young violinists, cellists, and pianists were formed with this method. Unfortunately, the State decided to retire Trendafil Milanov in 1985 and since he was the principal promoter of this method, his work came to a stop. I was one of these students in the first years of the experimental class. We were like a big family. We shared a lot of happy times in our solfege classes and frequent performances. We were proud to play an instrument.

As Milanov’s granddaughter, I feel a moral obligation to continue spreading and sharing this method with my fellow violin teachers and musicians all over the world. I have translated it in English and Spanish (the violin books; the piano and cello are coming soon) and I hope many students will benefit from this new way of learning. (Learn more about the Milanov Method by clicking here for the website.)