May Your Life Be Interesting

In January I finally decided to do something about my health, so I started doing yoga. One bad downward dog later and I was visiting my Dr. That led to getting a blood test done. Next thing I knew, I was on a weight loss program run out of my Dr. office. Oh yeah, we also got a new Pres. sworn in some time that month also.

July rolls around with me 50 lbs lighter. I phase off the diet, buy a whole new wardrobe in one day (Macy's My Stylist service - I highly recommend it) and do my yearly migration north to Interlochen for the Adult Chamber Music Camp in August. People I've known for nearly a decade didn't recognize me. I had to re-introduce myself to several people. Made great music for a week... ... and came back home to an eclipse followed by Harvey. 52+ inches of rain in a few days. It was scary, but I stayed "dry". I am one of the lucky ones. Several of my colleagues lost everything - literally. After a few days of being confined to the house, I was going stir crazy, so decided to start working on a new piece of music: Biber's Passacaglia.

Harvey came and went, and things started to finally calm down a little bit, so since I was on a roll, I started on another health goal. I started taking Chantix and finally quit smoking after having a 2-pack a day habit for longer than I would care to admit to. As of this blog, I've been nearly 3 months nicotine free with a 100% survival rate of my piano quintet.

After all this, I decided what the heck, I can do anyting! And so I started working on Bach's Sonata's and Partitas, beginning with the Fugue in G-Minor, on viola.

Bach may have put a damper on my success streak. It's been a few months and I'm on measure 23. It's slow hard work, but very satisfying to finally be playing a piece I never thought I'd ever be able to get beyond measure five with. And then it snowed, in Houston! Enough to make a snowman! Ok, so the snowman was 8" tall, but still!

After all this, I'm ready for 2018 to be supremely boring. Thank goodness my quartet is working on Eine Kleine while our pianist recovers from rotator cuff surgery. 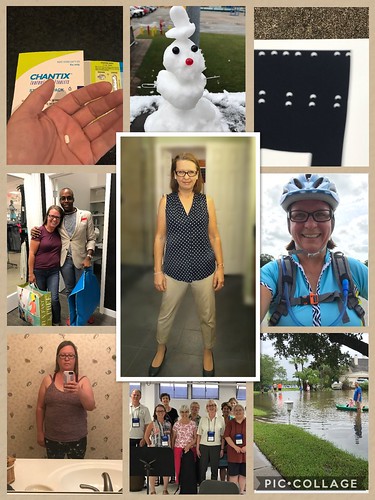