May 13, 2021, 3:38 PM · As developing violinists, most of us are required by our teachers to learn basic three-octave scales and arpeggios. A plethora of scale books are out there from which to choose to learn this fundamental skill. Today, two dominant systems of scales are taught to most student violinists — either the Flesch or Galamian methods. Each of these approaches have their distinct merits. Of course, both Galamian and Flesch produced many of the most prominent violinists of the 20th century, and their respective scale systems are at the forefront of their violin pedagogy. 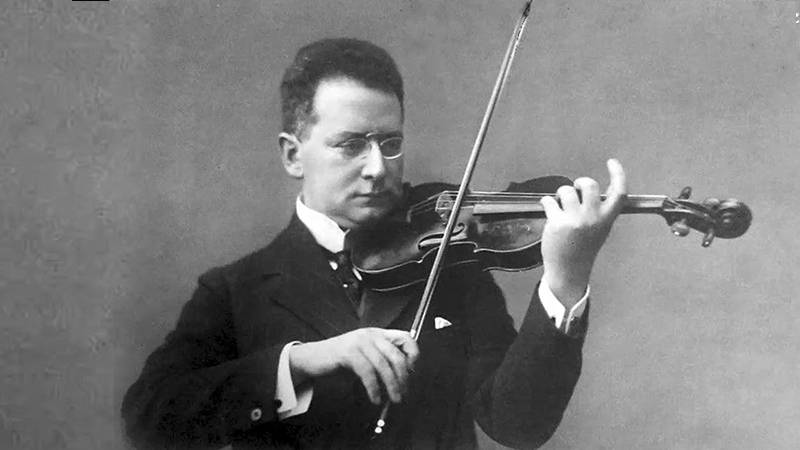 Galamian was an innovator and logician of violin technique. Carl Flesch, on the other hand, built his system upon the pedagogy of Otakar Ševcík expanding it as he thought the repertoire required. Everything in the Flesch scale system is immediately applicable to the most challenging passages in violin repertoire. Interestingly, in Galamian’s many editions of the standard repertoire he seems to adopt the Flesch approach to fingerings more often than those in his own scale system.

There is a practical difference between these two dominant pedagogical approaches. The Galamian system is a sprawling system of three books. It was intended as a "pick and choose" system according to the pedagogical needs of the student. Comprehensive in its scope, it is also difficult to put into a concise practice. Galamian recommended that scales be practiced an hour a day, and this was in fact the author’s experience as a Galamian student at the Meadowmount School in the 1970’s. However, the time restraints experienced by most students today makes this discipline difficult to accomplish.

In contrast, the Flesch scale system is surprisingly time-efficient, once learned. It functions much like a yoga for the violin. Flesch referred to it as "The Daily Prayers." The violinist practices one key a day, following the circle fifths throughout the course of a month. The system covers scales on one string, the three-octave scale and arpeggio sequence and the double-stop sections. It can be practiced in less than 30 minutes, once learned. But, of course, this presents the rub: Learning it!

My own initiation into the Flesch system occurred one summer when I took a considerable time off from playing the violin. Of course, when I took the violin out of the case to start practicing again, I was in horrible shape. The long unopened Flesch book on the music shelf harkened, and for the first time I read the entire introduction to the book. I quickly realized I never understood the system as Flesch intended. Thus began a process of learning and practicing the Flesch system daily as a way to get back in shape. Ultimately, it dramatically improved my violin chops, and over time, I was so impressed with what it did for my playing I adopted it as a basis for my teaching. One of my most important teachers, Szymon Goldberg, who studied with Flesch, instilled in me a sense of lineage that made this experience all the more meaningful.

So I am a fan of the Flesch scale system. However, my experience as teacher is that when students encounter the Flesch scale book for the first time, they are simply overwhelmed by its complexity. An amusing story about the genesis of the scale system is that Flesch included it in his pedagogical treatise, The Art of Violin Playing, but only in the key of C major. He expected his students to learn this most readable and understandable version of the system and then transpose it to all the other keys. To Flesch’s dismay, he discovered his students were only practicing the system in the key of C. The Scale System tome we know today was the result. Flesch not only wrote out all the keys, but included a multitude of bowing and fingerings which produced a volume of dense content. The later edition by Max Rostal, commonly available today, further added to the system’s complexity.

Because the complexity can be a major hurdle, I decided to write my own edition of the Flesch scale system titled Carl Flesch Distilled: A User-Friendly Approach to the Flesch Scale System. (It is available by clicking here, and readers of this blog post who wish to purchase the book can get a 20 percent discount by entering this code at the publishers website: VLNcom071109.) It is an attempt to make the elegant, succinct, and immensely applicable Flesch system more accessible but without dumbing down the content. Clarity and simplicity was my primary goal, with an emphasis on understanding the basic fingering patterns of the scales and arpeggios and suggestions to make the introduction of the double stop sections easier. The intent of the book is not to replace the Flesch’s masterly system, but rather to present it in a way that is less formidable. The book can also function as a shorthand version of the Flesch system, applicable to any violinist.

May 14, 2021 at 06:14 PM · Thank you for posting this. Very small world: I remember playing for you in a master class for the Prince William Youth Orchestra in the spring of 1985. You were a professor in Charlottesville at the time. I played the 1st movement of Viotti Concerto #23, another violinist played De Beriot Concerto #9 (1st movement), and one of the pieces you performed that night was Fritz Kreisler's Praeludium and Allegro. I still remember the advice and the tips you provided and apply them to certain passages encountered in the repertoire. I was introduced to the Flesch Scales around the same time. Though I am an amateur (classic definition: for the love of the instrument), I practice my scales everyday on the violin and also the piano (I had to learn the piano as a music major at West Virginia University). Scales and etudes have been the foundation for me.

May 15, 2021 at 08:44 PM · Thank you. I was raised on Galamian. With this post, I an now wanting to try the Flesch method, with your take. Thank you for the discount code. However the publisher's site keeps indicating this is not a valid code.

May 15, 2021 at 11:37 PM · EDITOR'S NOTE: Greetings, if you purchased a book and the discount did not work, then please email the publisher at mailto:sales@isgpublications.com, telling them your name, the date and time of your book purchase, and the correct discount code (VLNcom071109), and they will refund the discount to your PayPal account. The story at first contained an incorrect discount code; the code is correct now. (Thanks for pointing that out, Alice!)