Live from Utrecht: Highlights from the Netherlands Violin Competition 2022

February 16, 2022, 1:34 PM · On January 29, the Netherlands Violin Competition concluded its three-week 2022 edition by awarding its top prizes in the "Oskar Back" division for violinists aged 18-26 -- with first prize awarded to Isobel Warmelink, 25; second prize and audience prize to Emma Roijackers, 26; and third prize to Iris van Nuland, 19. (See all prize winners at the bottom of the story). 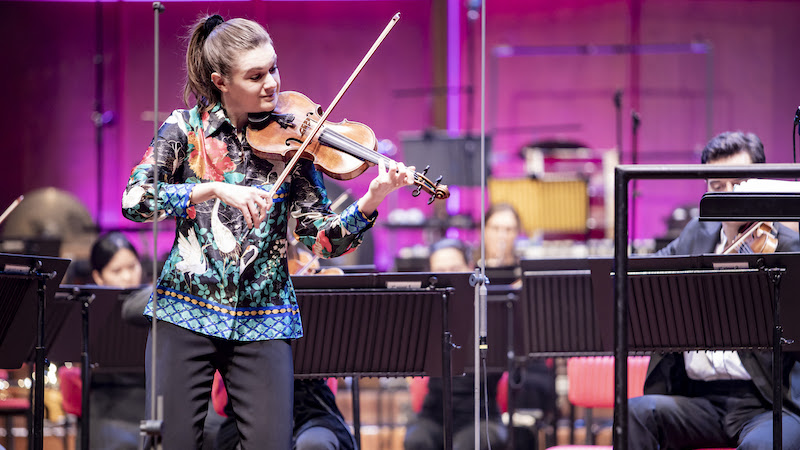 Violinist Isobel Warmelink, First Prize winner in the "Oskar Back" division of the Netherlands Violin Competition 2022. Photo by Foppe Schut.

In the finals, the violinists in the top age division performed either the Berg or Korngold violin concerto, accompanied by the Residentie Orchestra conducted by Bas Wiegers. Each also performed one of two Mozart Rondos, in which they conducted as well as played.

Due to COVID restrictions, the competition was broadcast via livestream, with plans canceled for a live Night of the Violin festival curated by Tim Kliphuis, ranging from Arab maqam and Indian raga to jazz and ragtime, and featuring a Paganini duel between laureates and the finals of the new Jonge Makers Prijs (Young Makers Prize) for creative violinists who were allowed to play anything but classical violin music. (The 2020 Competition, which I covered live, featured a first prize-winning performance of Mozart K.218 by Coraline Groen, now in the Royal Concertgebouw Orchestra, lots of serious competition, and a four-concert fringe festival in and around Utrecht curated by Diamanda Dramm, Emmy Storms, Niek Baar, and Yannick Hiwat.)

Still, the live-streamed competition turned out to be an engrossing musical spectacle. The competition had invested time, effort and resources and the director moved the cameras smoothly, focusing organically on the most important musical and technical challenges. In our new age of streaming, it was like you were really there.

The finals in the "Oskar Back" division were a contrast in styles.

Isobel Warmelink chose Mozart K. 269, which she played with sensitivity and immaculate intonation, folding her turns and trills into the music's flow. The orchestra was attentive to her throughout and her set-up of the central section was just right. Together they hit the sweet spot for tempo so that at the end it was like a perfect rainbow of musical thought; her happy grace notes in the cadenza were echoed by the orchestral violins - a very nice touch.

Her Berg concerto inhabited the human dimensions of the music's serial passion and communicated directly the specific dimensions of the events Berg was writing for, the death of Alma Mahler's 18-year old daughter; Warmelink's dancing rhythms ending the Allegretto were darkly sinister, biting.

Emma Roijackers played Mozart's K. 373 before giving a performance of the Berg that captured the serial passion along its glowing blueprint lines. The opening blend of the solo violin, clarinet and harp was a miracle, her dancing had weight and swing and elicited wonderful sounds from the brilliant orchestral brass. Her dialogue with the two clarinets intoning the Chorale was almost unbearably sad, and she dared at the end a true ppp.

Iris van Nuland played Mozart's K. 373 before courageously taking on the awesome challenges of the Korngold Concerto, her adventurous responses were exquisitely lyrical and inspiring, in the best soaring spirit of Alma Mahler to whom the piece was dedicated.

Other prize-winning performances by "Oskar Back" Division Finalists:

Emma Roijackers also won the Prize for the Best Performance of "Suddenly Wobbly" by Martijn Padding, and here is that performance:

Iris van Nuland also was the winner of the "Performance Prize" for her performance of a piece about Frida Kahlo, with actress Francisca Galante. Here is that performance:

Not playing classical music -- or at time re-inventing it -- the "Young Makers" contestants made quite a scene. First-prize winners Valentine Blangé and guitarist Cem Karayalçin played their own version of Saint Saëns' "Introduction and Rondo Capriccioso" as well as some other pieces:

The two violins and three cellos of the group "Ragazzi" played Arensky in the rhythms of Django Reinhardt. The Teddy Sicking Quartet, dressed in black and silks, eased elegantly into the Nimrod tune from Elgar's Enigma Variations, finding wistful melancholy.

After the Competition, "Oskar Back" first-prize winner Isobel Warmelink, who at age 25 will no longer be eligible to compete in subsequent years, told me, "It was my last chance to do something at this competition and I felt very well-prepared. I've tried orchestra, chamber music, early music, contemporary music - still exploring what I want to do."

Warmelink, an experienced soloist and graduate of Royal Conservatoire in The Hague, where she studied with Koosje van Haeringen and Vera Beth, explained that the three finalists had met with the conductor and with a string quartet from the orchestra. "They may have thought we wouldn't have much experience leading an orchestra," she said, "but actually I've been taking conducting lessons for two years." Each of the finalists had 30 minutes to rehearse the Mozart with the full orchestra, and 45 minutes with the full orchestra for the Berg. "We definitely had enough time to go through everything," Warmelink said.

Conductor Bas Wiegers described what the contestants had to do, faced with both conducting and playing their Mozart pieces: "Communicating to an orchestra is really a weird thing. Be direct and they will do everything for you. Of course," he laughed, "you don't want to offend people who have been playing Mozart for 40 years, when you're doing it for the first time. One of the orchestra musicians gave them a wonderful example. He told the contestants, 'When you want us to play piano, just tell us to play' – and here his voice dropped to an inaudible whisper – 'piano.' Just keep doing that and we will be with you.'"

Joshua Tavenier (16), who took first prize in the Davina van Wely division, detailed the support the Festival had provided, which included working on stage presence and how to combat stage fright. "It really helped me to understand what I'm actually doing on stage when I'm performing. The requirements for the Competition were really hard, but the challenge forced me to practice a lot. I actually really enjoyed the process of learning what works for you in the practice room, and learning how hard you can actually work to achieve something."

Tavenier said he "really enjoyed it and really wants to come back," but he will likely wait four years to enter again. "It's tough being the youngest," he said. When I asked him about the great legacy of Dutch violin playing, he said its greatest inspiration is that "it makes you want to focus on innovating and moving forward, instead of looking back at its past."