January 24, 2023, 1:14 PM · "I've never felt lonely playing viola, under any circumstance, whether it's on my own, as part of a chamber group, as a soloist with an orchestra or as part of an orchestra," said Yura Lee, principal violist of the Los Angeles Chamber Orchestra (LACO). "It's an instrument that makes you feel very much a part of something bigger."

Yura will play viola as one of the featured soloists in LACO's concert series this weekend called "Baroque Concerti," with performances at 7:30 Jan. 28 at The Wallis in Beverly Hills and 7 p.m. Jan. 29 at The Huntington in Pasadena, Calif. Click here for more information.

Yura Lee will play one of the earliest-known and most popular non-modern viola concertos, Georg Philipp Telemann's four-movement Viola Concerto in G Major. For viola students, the piece also often serves as their introduction to viola concerto repertoire - with viola students encountering it in Suzuki Book 4. 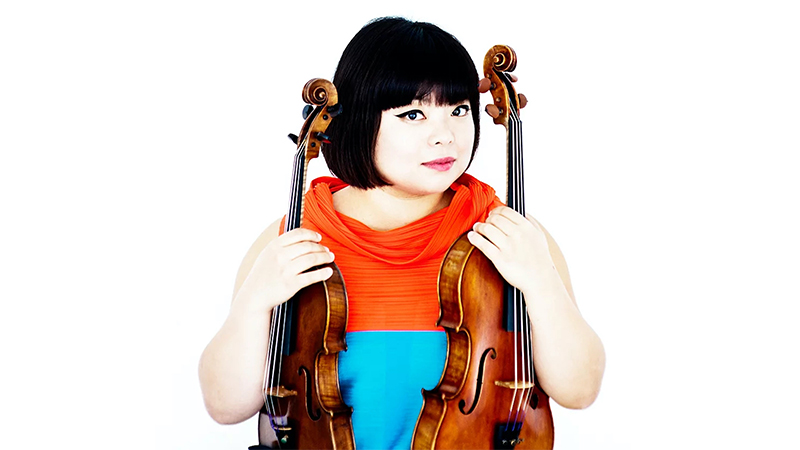 Yura -- who also is currently a member of the Chamber Music Society of Lincoln Center and Boston Chamber Music Society and teaches at USC's Thornton School of Music -- made a name for herself as a violinist before adding the viola to the mix. In fact, she was the youngest artist ever to receive the Debut Artist of the Year prize at NPR's "Performance Today" awards - at age 12. But she nearly burned out on music before even turning 20.

Yura's musical journey began on the violin, in her native South Korea, when her parents enrolled her in Suzuki violin at the age of 4. They just wanted to give her an extra activity.

"I had an incredible teacher who really fostered the fun in music and knew how to stoke the curiosity in the kids," Yura told me in an interview last week. Through the Suzuki class she met Nam Yun Kim, a prominent violin teacher in Korea who became her teacher. Her progress skyrocketed.

At age nine, Yura went to Juilliard, where she studied with Dorothy DeLay and Hyo Kang. Also at the age of nine, she signed with management and started concertizing. It was extremely demanding.

"I entered Juilliard when I was nine and finished when I was 15, and I was working the entire time," she said. By the time she was finished at Juilliard, "I had so much experience compared to people that age, but I had lost completely my love for music."

Due to her busy performing schedule, she had been playing three to four concertos a year, "and didn't have time for anything else, including life itself," she said. "So I was thinking about quitting music altogether and doing something else."

She worked with Miriam Fried at Ravinia, and "I had to relearn how to think about music and how to approach music physically and mentally."

Her explorations with the viola came, not because she wanted to switch instruments, but because she wanted to expand the possibilities. "I've always wanted to play cello repertoire, so that's why I wanted to play viola," she said. She started on her own, when she was about 10, with "a very small, very terrible viola that I came across and borrowed for few years," she said. "I would just play for myself for fun; I would play Bach Suites every morning. I would always start with viola and then go to violin practice."

She didn't play the viola publicly until about 2006 - more than 10 years later. "I came across a viola that I could finally actually play," Yura said. "I'm pretty short, and my wingspan is really small. I came across a viola made by Douglas Cox, which I still use. That summer at Marlboro Music Festival, they needed an extra violist to play Kodaly Serenade, so I just stepped in. But I hadn't played it publicly before that."

She started getting more serious about the viola, and in 2008 she went to Salzburg to study viola with Thomas Riebl, then to Kronberg Academy in Germany for both violin and viola with Ana Chumachenco and Nobuko Imai. "Those were kind of my very last steps of being completely free from school, but also a very important part of my life even today, that affected how I think about music and how I approach music."

"Playing violin concertos is beautiful, but as the soloist you feel kind of like the special oil above water - you're never emulsified," Yura said. Playing the viola, the soloist doesn't have separate feeling of being above the orchestra. "You can't, even if you try to force yourself to project over the orchestra," she said. "At the same time, if you do your job right, you just blend in so perfectly, and at the same time your sound does shine. So it really does feel like you're part of a group."

Compared to the violin, the viola does not have many concertos to call its own. One reason may be that there are fewer viola soloists, but another is the fact that it's more difficult to write a piece for viola soloist with orchestra that achieves that balance and allows the viola's solo voice to really sing. The beauty of a concerto like the Telemann that Yura will perform this weekend is in the way that the composer crafted it.

"I think everything about viola is much harder than the violin, and people don't quite realize it," Yura said. "Because of the nature of the viola, it's hard to achieve that balance. Telemann does a very good job with that, while making the viola shine."

Click here for more information about this weekend's LACO concerts that feature Yura and other soloists playing Baroque Concerti.

January 25, 2023 at 02:04 AM · I bought a viola and learned the clef so that I would have more musical opportunities. It was one of the best decisions I ever made. I play tons of chamber music, about 1/3 on violin and 2/3 on viola!

January 25, 2023 at 07:06 PM · I think playing chamber music is just so great in many ways. I love how I'm a single unit in a group contributing to so many beautiful and lush harmonies and textures. I love the close interaction and connection between players in a chamber music setting. I'm now in a situation where I miss chamber music greatly and want nothing more than to find the right people to play chamber music with, but finding those people isn't easy. And yes I do love playing both violin and viola and struggle to choose between the two, as well as piano.

January 31, 2023 at 04:52 PM · Thank you, Laurie! I am learning the Schubert Arpeggione Sonata and I often listen to Ms Lee playing it on you tube. It's especially inspiring to read about a successful violist who is of small stature, like me.