Debbie has been teaching since she was in the fifth grade, and she started teaching Suzuki Method in 1978 - during the formative years of the Suzuki Method in America, studying with Hiroko Primrose. Debbie is a co-founder of the Gifted Music School in Salt Lake City, where she is also a Teacher Trainer. I saw her teach a master class at the Gifted Music School last February, as we were all still emerging from pandemic restrictions. It was one of the first live master classes after the pandemic, and for me it was greatly inspiring.

Debbie has the experience to listen to a student once and identify one good lesson that will bear fruit, and she has the discipline to stick to what Suzuki called the "one-point lesson." In other words, the idea is not to "fix everything" in a one lesson - but to illustrate and teach one cogent point that will give the student some immediate success - and also some food for later thought and further work.


Whether the student was playing a concerto or working on the most of basic skills, Debbie had a way of keeping things positive and creating that simple plan for progress, right on the spot.

While the problem may have been something tricky, she made the solution seem simple - presenting an easy path for the student to take with inevitable success.

The morning began with a performance of the first movement of Bruch's Violin Concerto No. 1 by a student named Blake. While he had a good sense of time, some rhythms were unclear, both in held notes and the runs.

Debbie said she would begin with a friendly riddle, and see if he could tell what she wanted to work on.

"I like to know what is going to happen," she said, "that I can count on certain things..."

"On that first note, I want to know what is happening."

Debbie had brought an impressively large metronome (it looked to me like the original Dr. Beat) - and she set it to 60. She wanted him to play from the beginning, with the metronome, counting every beat. They played it together once.

"We'll do it three times, just to get the flow of it."

The beginning of the Bruch, she said, "can sometimes sound like it's coming out of a swamp." In fact, it is normally played with so much rubato, it actually sounded a little strange when played completely "straight" like this.

After they had played it together, she had him try it on his own, as she counted with him. 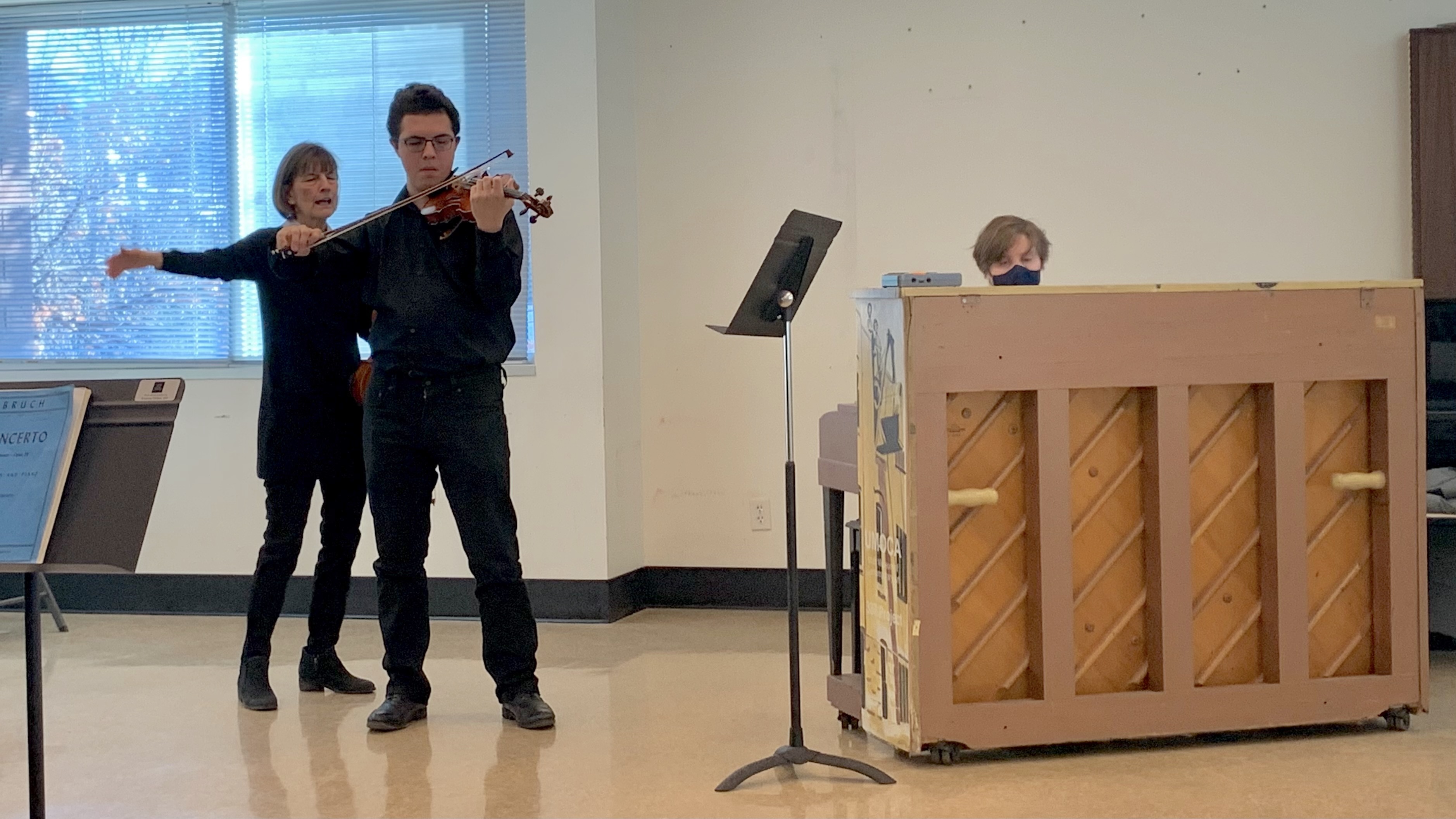 "We can stretch the beat," she said. "As long as we are counting and have the beat inside, it's possible."

Even in something like a piece by Kreisler, which has a great deal of rubato, it's still important to have that internal and detailed sense of exactly where the beat lies and how the rhythms relate to it - before playing around with the pulse.

After he had played the beginning several times extremely straight, with the metronome, she let him try slowing down and doing some rubato.

"I recommend always counting," she said.

At last they arrived at the second line of the piece, and she asked, "is the second line more intense than the first?" The second line tends to get a stringendo, a speeding up of the beat. But the pulse and general outline always has to be felt.

In measures 34-36 there is a series of triple-stops, and she wanted him to play them with more of a feeling of "three strings at once" rather than rolled chords. So they broke it down: First hold the bow over the strings, and do circles in the air, without touching the strings. Then, try the triple-stops on open strings, no fingers, being sure to land in "Lane 3 of the highway," that is, not too close to the bridge. That helps get all three strings at once. Moving it to Lane 2 (a little closer to the bridge) "it will have a little more kick," she said. Lane 1 would be right by the bridge - harder to get all three strings because they have less give there.

Blake succeeded in playing all three strings at once, and it sounded great.

Running out of time, she returned to her original point, to send him home with it: "and you're going to revisit this all -- with a predictable beat!"

Next was Hannah, who played the first movement of Bach's Concerto in A minor. She played with great form and a nice, loose vibrato.

Debbie wanted to get more motion and bow into the start of the piece and to generally get more tone into her playing. 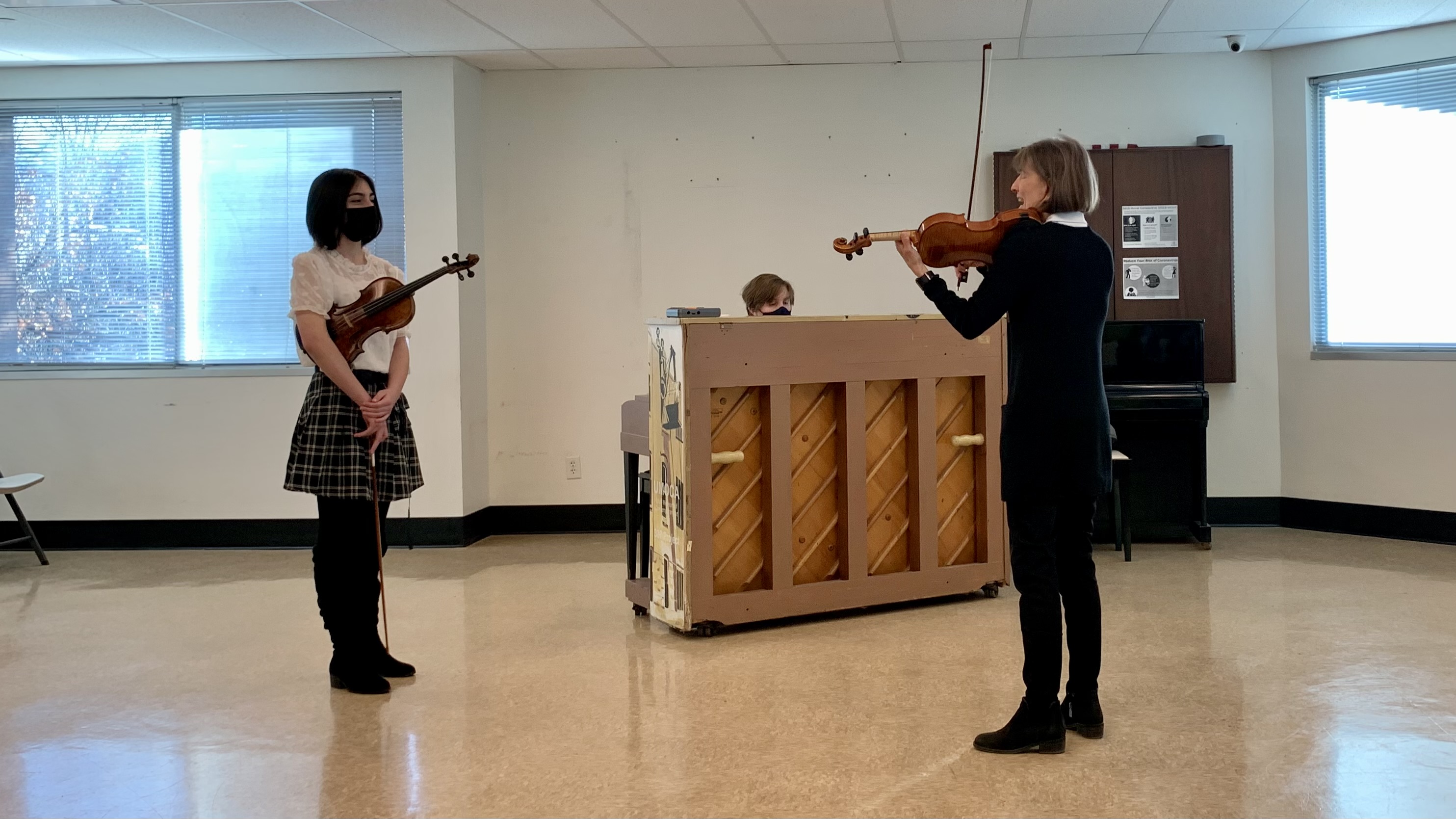 In order to loosen the bow hand and bow arm, Debbie had her do a simple exercise that I hadn't seen before: play a big up-bow, then allow the hand to go all the way over to the left side of the violin and dive over the edge with the bow, until the tip is pointing to the floor, over the left side of the violin (not touching any string). The idea is to keep the bow completely in control, without any "flopping" at the end. What a great exercise for bow control and for building more flexibility into the bow hand!

Then they practiced simply playing the first two notes of the Bach Concerto, sweeping to the frog on the up-bow, and then "exploding" with sound on the down-bow. The bow comes slightly off the string, by virtue of the string-crossing between these first two notes.

And it's not just these grand gestures that deserve a lot of attention, but also it's important to be present - tone-wise - in the running passages. For example, "these are special notes":

This passage of 16th notes needs shape, tone and attention.

She also wanted Hannah to think about what she wanted to say in the music, what kind of feeling it conveys. For example: Are you tickling somebody? Are you kicking rocks? Is it sunny? She had her walk around the room, stepping to the beat.

Next was a very young student named Alex, who played the first movement from Vivaldi's Concerto in A minor. Honestly, it's pretty impressive when a student this young can play this piece so well - and he did a great job on the complicated passages (written not by Vivaldi, but by a later violinist named Tivadar Nachez) that give so many students so much grief. I did notice that his toes were pointing one way and his violin the other, and that his bow thumb was a bit locked. But does one bother with such details, when a kid is having so much success with the notes?

In a word, yes! Debbie went straight to these fundamental position issues. It was a reminder to me that a teacher always has to be thinking about a student's long-term development. Sure, a young student can get away with position problems and still play pretty well. But a student's capacity can grow even bigger after solving those problems. A good teacher helps a student get his or her position and technique working not just passably, but properly.

The first thing she did was to tell him to position his feet apart, rather than standing with his feet together. "I call this riding the horse," she said.

Next she talked about how to hold the bow - "it's very important that your fingers are alive on the bow," she said. She had him tap each finger of the bow hand against the stick - something that takes a lot of concentration, especially in a young student.

Debbie works with Alex, talking about the fingers of the bow hand.

She played a big down-bow on her open E string, using her arm weight to pull through the note. Then she explained: in order to do that, "the thumb needs to be bent," she said, "you have power in that thumb!"

She had Alex do the same thing: play five down-bow open E's, using that powerful bent thumb - and he started getting a great sound.

"Do you hear that?" she said. "That was your violin talking! Let it talk again."

After more of those beautiful down-bows, she reiterated, "a bent thumb is absolutely necessary when you play the violin.

"Listen to what you are playing and search for that deep sound," Debbie said.

They tried the beginning of the Vivaldi, using big bows and searching for that big tone - and bending that thumb!

Toward the end of the master class, Eugene Watanabe, founder of the Gifted Music School, expressed his appreciation for Debbie, who has taught hundreds of students, and who counts among her former students a number of well-known violinists, such as William Hagen.

Debbie works with her students in an extremely detailed way, to ensure that they each develop the best-possible foundation. For example, a tiny difference in the way a student holds the bow can ultimately "turn into the difference that makes or breaks the sound," Watanabe said.

It's that kind of attention to detail that makes all the difference, especially when communicated to a student with care and trust.