Violinist Steps in at Last Minute to Conduct Nutcracker Ballet

January 2, 2023, 8:53 PM · On December 21, the night before five sold-out performances of the Nutcracker Ballet were to begin, the Los Angeles Ballet had a pretty serious problem: the orchestra had no conductor.

The orchestra - made up of veteran musicians who had played the ballet for many years - had just two rehearsals prior to the performances. This year, however, they did not have their regular conductor, and things weren't coming together with the sub. Mid-way through the dress rehearsal, organizers decided that a radical change was necessary on the podium.

That's when they asked concertmaster Bruce Dukov if he could step in and conduct the ballet. He immediately rejected the idea.

"I did take conducting at Juilliard, but my conducting is certainly not on the level to do a ballet," Dukov told me. So Bruce turned around to the violinist sitting third chair: Armen Anassian.

"I'd never seen him conduct before, but he knows the ballet frontwards and backwards," Bruce said. "So I said, 'Armen can conduct - you should ask Armen to do it!'"

In reality, Armen has quite a lot of training as a conductor, as well as experience, mostly in Europe. "But people here don't know that," he told me.

However, he never had conducted a ballet - and certainly not with less than 24 hours notice.

"Of course, now I had a giant pit in my stomach," Armen said. Nonetheless, he took the podium. "I tried it, and it went extremely well."

Dukov was more effusive: "He stepped up there and was in full command, complete confidence," he said. "The whole orchestra was in awe."

It went so well that after the rehearsal, the choreographer came to Armen and asked him to conduct the orchestra for the whole run - all five performances.

And no pressure, but these were five completely sold-out performances at the Los Angeles's Dolby Theatre, which seats 3,400 people.

"The show was so sold out, I couldn't even take my mother!" Armen said.

"I spent the entire night marking up score - and air conducting," Armen said. "Then in the morning I spent time with choreographer." It was his first time conducting a ballet, and "they were using ballet terms I didn't know - 'Wait for her to do the fish,' they said - what is the fish? I didn't know! So they were showing me."

All that last-minute cramming worked - the performances went beautifully.

"Armen was unbelievable," Bruce said. "He had such natural movement, he was so secure in his conducting, and he knew the music so well. It was truly a Christmas miracle."

In fact, Armen just kept getting better with every performance, Bruce said. "The way he blossomed into this so naturally - to watch him conduct this so perfectly, it was such a revelation."

For Armen, "It was overwhelming," he said. "It was wonderful - the orchestra was really lovely to me. They surprised me with gifts and speeches - they created a huge poster of me conducting them, and everyone wrote on it." 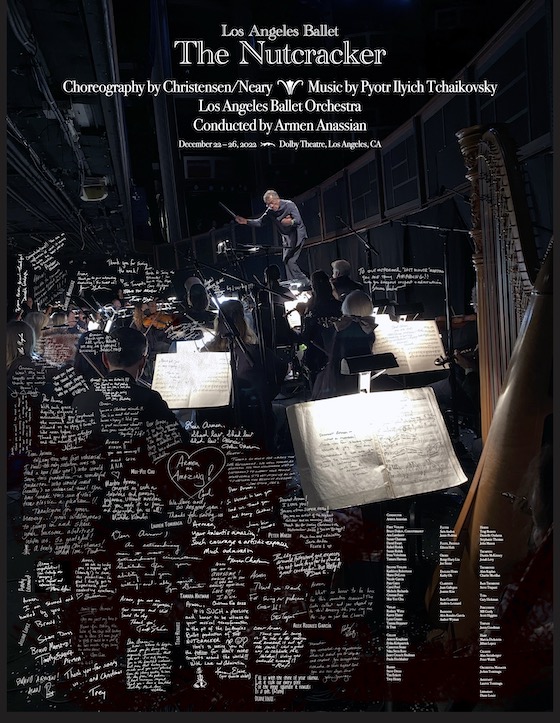 Armen has a successful performing career as a violinist, playing in just about every orchestra in the Los Angeles area, including as associate concertmaster in the Los Angeles Opera. He has also played as a soloist with orchestras around the world, and he is a regular in the recording studios of Hollywood.

"But my dream was to become a conductor," Armen said. At age 59, he wasn't sure if that dream was going to happen. "We age, and we reconcile with having to kiss certain dreams goodbye - but who knows! This Christmas has been just magical for me."

January 3, 2023 at 04:40 AM · It’s wonderful to read this account of Armen’s success in the most challenging circumstances! And yet I must say that I’m not surprised to read it. Before I retired, I’d been a colleague of his for many years, in the pit for LA Opera chiefly, and in numerous conversations I’ve got a good notion of the depth of his musical sensibilities and his extensive experience in the musical realm beyond the fiddle. He’s also played concertmaster for the opera; his command of the brilliant solo part of Britten’s Turn of the Screw will always remain in my memory.

Other opera musicians can back me up on this: Armen is a serious long-distance runner, and on at least one occasion he’s come to a matinee performance after having run the LA Marathon.

I hope his remarkable conducting outing leads to a well-deserved second career.

January 3, 2023 at 05:27 AM · Oh my goodness. I've played viola in the Nutcracker a couple of times. Very complicated score. I cannot imagine conducting that as a pinch hitter. What musicianship this person must have, to have pulled that off.

January 3, 2023 at 02:39 PM · Bravo to Maestro Anassian!!! At age 59, he might just have become an overnight success. I truly hope so! (And kudos to the other heroes of this story: Mr. Dukov and the choreographer.)

January 3, 2023 at 03:09 PM · I love stories like this; another Christmas miracle. I wonder if he will conduct the Nutcracker next year...

January 3, 2023 at 04:37 PM · This is how some conductors get their breakthrough start. The most famous example would be Toscanini in Buenos Aires. Conducting is the one music job that one can start later in life, after doing the usual training on an instrument or voice. How does one prepare for an opportunity like this? Imagine that you are the understudy, emergency backup conductor for your orchestra. Studying the score has unexpected benefits to your orchestra playing.

January 5, 2023 at 12:17 AM · Long ago, I was a colleague of Joseph Silverstein, the eminent concertmaster of the Boston Symphony, who was also a fine conductor. He told me this story:

"We were rehearsing one day with William Steinberg, and he leaned over to me and asked, 'Joey, what's harder, playing the violin or conducting?' I said, 'playing the violin, of course.' To which Steinberg replied, 'Shh! I know that, but don't tell anyone else.'"

Congratulations to Armen. I know he'll make a fine conductor!

Fantastic and I just read this when needing a Lift!!! Knowing Bruce Dukov, I can more than well believe the Violinist sitting on the 2nd Stand behind Bruce was a Marvellous musician and with a hidden Dream!! This is truly a Miracle Story and for Christmas of 2022!!!

My immense Cngratulations to the "Overnight" Success at only 59, Armen Anassian, whom I will now loudly mention here in Chicago, to those at Lyric Opera of Chicago and our Chicago Symphony Orchestra musicians and Then Some!!!

Brava Plus to one who may receive his global due started in LA in less than 24 hours notice & doing a remarkable Job of 'It's' re Ballet language plus untold details to memorise yet a superb musician knowing The Nutcracker Score backwards/ underneath & sideway's with obvious musical affinity for and with Tchaikovsky!!

Fine Ballet Musician Conductor's are truly hard to find knowing this from my 1st Cousin, Conductor of the Stuttgart Ballet for quite a long tenure and just prior, a ballet trained dancer!!!

A belated Merriest Christmas and Banner New Second Career to Armen Anassian, in the New Year of 2023!!!

*I've an Idea for "Jewels", created by close friend of The Nathan Milstein's, choreographer ~ George Balanchine!