September 23, 2022, 11:53 AM · INDIANAPOLIS - Undoubtedly, Mozart's most-played violin concertos are his third, fourth and fifth ones - all written before the composer turned 20 years old. For many years, the first two concertos have been overshadowed by the last three. But his Violin Concerto No. 1 has been making a comeback, and the fact that two of the six finalists in the International Violin Competition of Indianapolis chose to play it in the Classical Finals on Thursday certainly counts as further evidence.

Playing with a Giovanni Battista Guadagnini violin, Wells started with Mozart Concerto No. 1. Wells who is 21 and from the United States, studies with Mihaela Martin at the Kronberg Academy. She has won a number of competitions, including the Mendelssohn Bartholdy Competition in Berlin. 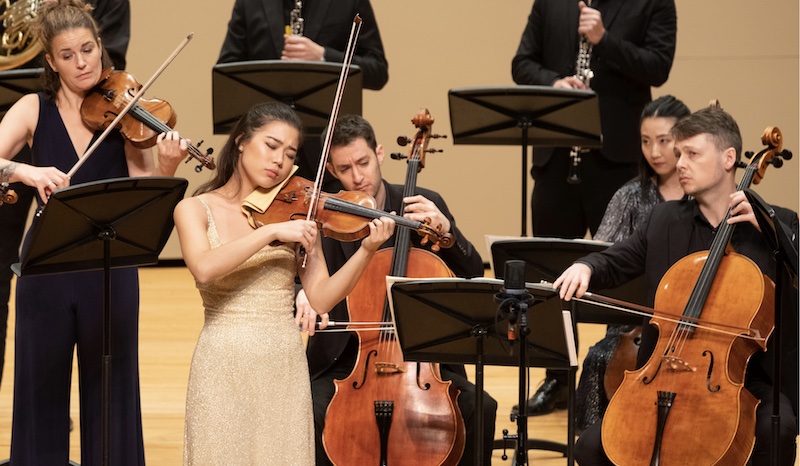 Wells began by playing along with the orchestra tutti in its introduction, then entered decisively as the soloist. The first movement is full of passagework, and she played it cleanly and energetically.

She brought out the rich and dark sound of her violin in the long melodic lines of the second movement. Wells played cadenzas by composer and Mozart scholar Robert Levin, which in the third movement were full of string crossings, fast runs and great-sounding trills. ]

For her Kreisler piece, Wells chose "Tambourin Chinois," full of energetic up-bows and traveling with lightning speed all over the fingerboard before slowing into a more melodic middle section, where again she brought out the deep voice and singing quality of her violin. The ending was great - very fast passagework leading up to a perfect little harmonic, like a cherry on top. 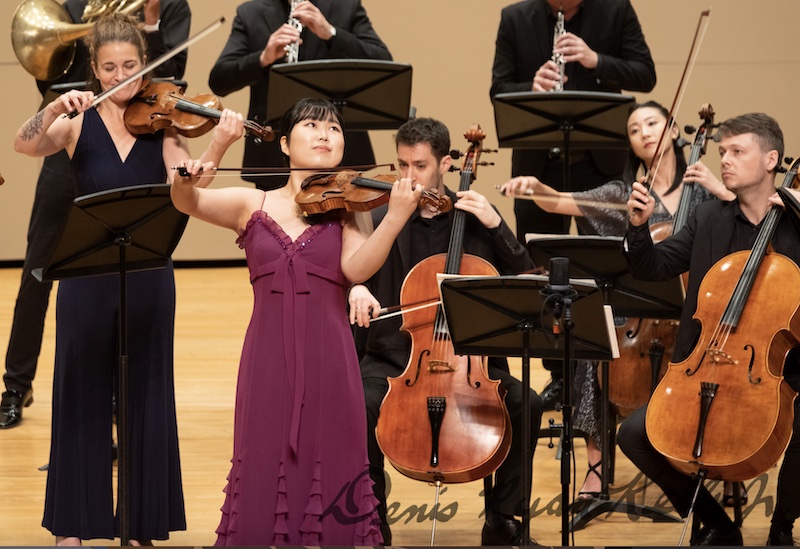 Playing on a 1794 Giuseppe Guadagnini violin, Lee was very demonstrative as she played with the orchestra in the introduction, leading with large gestures. She played cadenzas by the 19th-century pedagogue Hans Sitt, which were interesting and unique, with plenty of double-stops, trills and other tricks. She played them with good pacing that gave them the sense of being improvised.

The last movement was fast and bright, with tidy entrances and nice exchanges between Lee and the orchestra. The double-stops in the cadenza were impressive for their precision.

Lee's Kreisler piece was a highlight - she chose to play "Liebesleid," or "Love's Sorrow." The music is a journey through sorrow - starting with sadness, moving to nostalgia for sunnier times, and then back to sorrow. She began the piece with that kind of human-voice violin tone that makes audiences weep, playing with precise rhythm that gave it the lilt of a dance. With a beautiful slide up the fingerboard she transitioned into the happier nostalgic musical theme. Then with just the right kind of vibrato, change of speed and tone, she really delivered on the poignance of the return to the more sorrowful original theme.

Sirena Huang, 28, of the United States, capped off the evening with a performance of Mozart's Concerto No. 3 in G. Huang has won a number of competitions and awards, including First Prize in the Elmar Oliveira International Violin Competition and the Tchaikovsky Competition for Young Musicians. 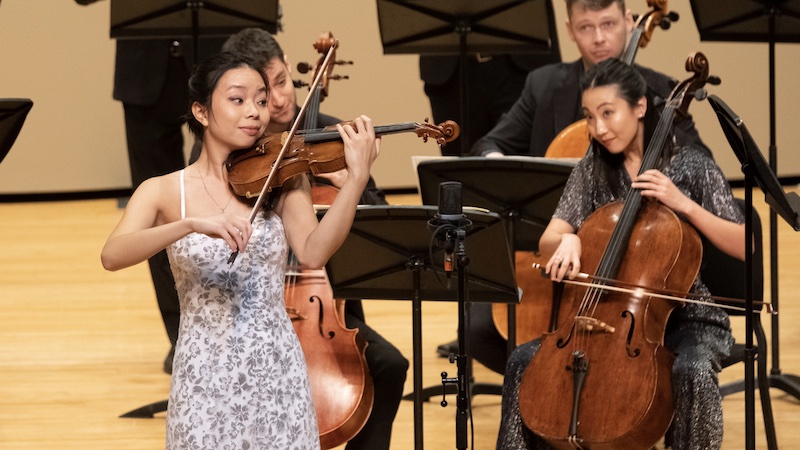 Huang is a polished performer, with a smooth style and confident stage personality. For this well-known Mozart concerto she played her own cadenzas, which were meaty and satisfying - not only full of virtuosic turns but also featuring changes in motion and key. The second-movement cadenza was exceptional. Keeping the character of that highly melodic movement she used double-stops to create triplet accompaniment under the melody, much like a solo Bach piece - highly effective and impressive.

The melody in the second movement is one of Mozart's finest creations - it reminded me of something violinist Mark Kaplan recently said about Brahms' A major Sonata: "It is much easier to bring across something dramatic or exciting or tragic to an audience than something that is quite simply full of love." Here is a melody "simply full of love," and Huang made it soar.

For her Kreisler piece Huang played "La Gitana" ("The Gypsy") with confidence and great control of all the various tempo changes the piece requires. While this may be a competition, with the inherent stress that entails, it seemed clear that fun was happening here. The musicians in ECCO were playing with smiles on their faces and seemingly dancing in place. It was a great way to end an excellent string of performances in the Classical Finals.

You can watch this performance and other previous performances from The Indianapolis competition by clicking here.