September 21, 2022, 9:31 AM · INDIANAPOLIS -- What gives a competition its reputation? Certainly the "level of playing" at the competition itself factors highly, but the career trajectory and ongoing artistry of its laureates also plays an important role.

On Tuesday, I had the chance to hear the Indianapolis competition's most recent top laureate - 2018 gold medalist Richard Lin, who performed a recital for supporters of the competition with pianist Thomas Hoppe at Butler University's Schrott Center for the Arts. (Watch the Donor Appreciation concert for free here; the music begins at 19:10.)

Let's just say they are still picking winners - what playing!

Playing on his 2022 Sam Zygumuntowicz violin, Lin offered a well-crafted and beautifully-played program - including the Vitali Chaconne; Saint-Saëns Sonata No. 1; Corigliano Sonata and topping it all off with a virtuoso Concert Fantasy on Themes from Porgy and Bess, by Igor Frolov. He also played two encores: "Meditation" by Glazunov and "Banjo and Fiddle" by William Kroll.

After the concert I spoke to Lin, and he said that whenever he plays a recital, he always wants to play something in tribute to his former teacher, the great violinist Aaron Rosand (1927-2019). In this case, it was that Meditation by Glazunov, a piece written in 1891 which truly has that flavor of the early 20th-century "Golden Age" of violin playing - a straightforward and beautiful romantic melody, which Lin played with just a bit of that schmaltzy style of the era. 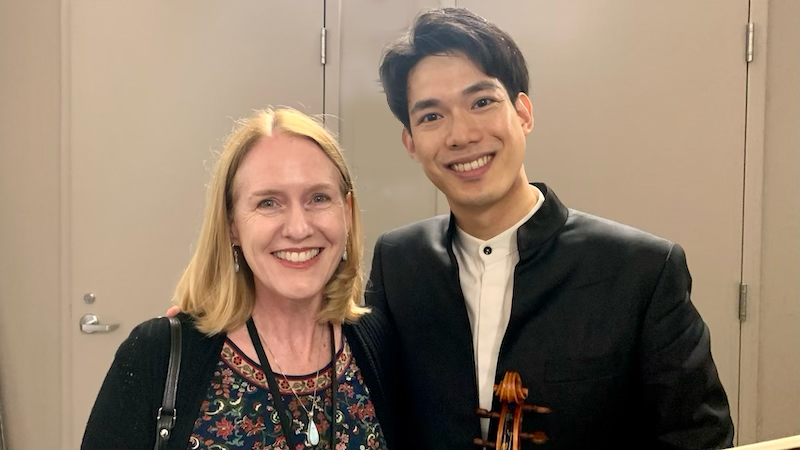 Lin, 31, was born in Arizona and raised in Taiwan, where he now lives. He studied at the Curtis Institute with Rosand, then earned his master's degree from The Juilliard School, where he studied with Lewis Kaplan. In June he gave his Carnegie Hall debut, following a series of concerts throughout Taiwan with the National Symphony Orchestra, National Taiwan Symphony and Evergreen Symphony Orchestra. He is a member of Chamber Music Society of Lincoln Center's Bowers Program. Next summer he plans to release an album featuring his Carnegie Hall program, including a number of the same pieces that were in this recital.

Lin kicked off his program with the Chaconne in G minor by Vitali - also known to many violinists as "that piece I butchered in high school." It's a piece that is frequently assigned to students who are just on the cusp of becoming advanced players, to put them through their paces.

But this piece is full of so many musical ideas - sighing, crying, resignation, triumph, downright wailing. It deserves virtuoso execution, and that is what Lin gave it.

Lin had a fantastic partner in Hoppe. During the Saint-Saëns sonata I felt the sense that this pianist could handle any speed a soloist wanted, no matter how fast. He also reminded me of a conversationalist: the person in the room who understands exactly what you are trying to say, who listens intently (without spacing out while you are talking) and then adds the most incredibly intelligent insight to what you are trying to express.

The third movement of the Sain-Saëns felt like a dance in tippy-tippy toe shoes, with so many bouncy up-bows, and the fourth movement put the "molto" in "Allegro molto" - these two broke the speed limit, for sure, and their synchronicity was stunning, as they playing parallel lines precisely together at beyond-full-speed to the end.

The highlight of the evening was the Concert Fantasy on Themes from Gershwin's Porgy and Bess. While Jascha Heifetz' violin arrangements of music from Porgy and Bess are played frequently, this arrangement by Igor Frolov (1937-2013) is less well-known - I'd never heard it before. Frolov was a Russian violinist who taught at the Moscow Conservatory - there is a great bio of him in the notes to this Youtube recording.

That said, it's a fantastic arrangement in which the virtuosic and violinistic gestures never wreck the "singing" aspect of the music, keeping its integrity as opera music. Lin absolutely sang this music and proved a master of melody-making; all the impressive tricks, the harmonics, came off as seemingly effortless and served the music beautifully.

If you would like to watch Richard Lin and Thomas Hoppe's performance click here; the music begins at 19:10. Classical Finals begin tonight for the Indianapolis Competition, with Joshua Brown, Julian Rhee and Minami Yoshida. Click here to watch.