September 7, 2022, 6:47 PM · It's been four years since violinist Richard Lin took the gold at the 2018 International Violin Competition of Indianapolis - and now it's time to do it all again. The 11th Quadrennial competition is set to begin in Indianapolis on Friday, and it will run through Sept. 25.

After opening ceremonies on Friday, the Preliminaries will begin at at 9:30 a.m. ET on Sunday. Click here to watch the live feed on Sunday! We'll also provide an easy link to the livestream from our Violinist.com front page during the competition. A full schedule of the competition rounds is available on this page. 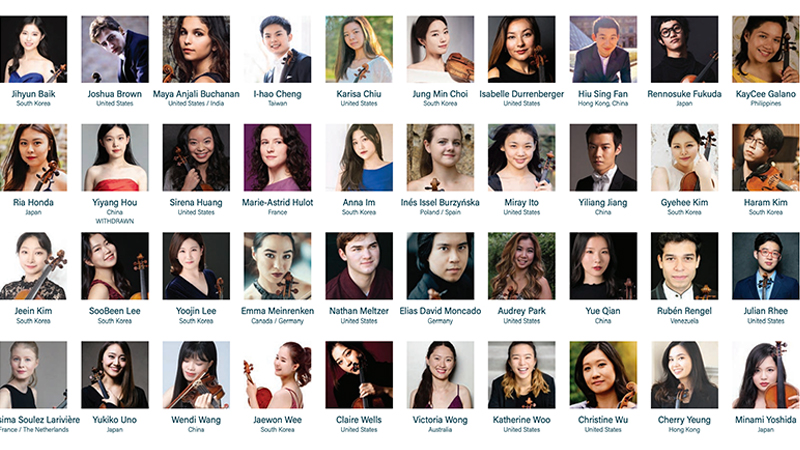 Participants in the 2022 International Violin Competition of Indianapolis.

"The Indianapolis" is one of the few major international violin competitions that takes place in North America, and its reputation for excellence consistently draws the best-of-the-best violinists from all over the globe. This year will feature 39 participants between the ages of 19-29, representing 13 countries across five continents. You can reach bios of the all the participants from this page.

I have been going to The Indianapolis since 2010, and I have found that this competition, more than any other, has been the place where I have first seen violinists who are truly on the cusp of a major career. These are just a few of the violinists whose names have popped up again and again thereafter (and I'm leaving out so many!): Augustin Hadelich, Simone Lamsma, Yura Lee, Bella Hristova, Tessa Lark, Benjamin Beilman. And before that: Leonidas Kavakos, Andrés Cárdenes, Ida Kavafian, Soovin Kim, Frank Huang, Jaakko Kuusisto, Stefan Milenkovich, David Kim, Martin Beaver, Mihaela Martin...the list goes on! And it's not just the "gold" winners who have made names for themselves - many Indianapolis laureates who placed second, third, sixth... are touring the world as soloists, sitting as concertmasters of major orchestras, teaching at top music schools, and more.

The Indianapolis was founded in 1982 by Josef Gingold, the highly respected and much-beloved Professor of Violin at Indiana University who set the tone at that institution from the time he arrived in 1960 until his death in 1995. A protege of Eugene Ysaÿe, Gingold took to heart Ysaÿe's ideas about the importance of "striving for beauty in both music and in personal relations." Having attended school at Indiana University in the early 90s, I can attest the positive effect of Gingold's benevolent presence and his insistence on making beautiful music. Before coming to Indiana, Gingold served as concertmaster of the Cleveland Orchestra for 13 years under George Szell.

That "spirit of Gingold" still presides over the competition in many ways. His student, friend and colleague, Jaime Laredo serves as Jury President. The 1683 "Gingold" Stradivari that he once played is made available to one of the laureates for the four years following each Competition. And his former students and colleagues continue to be present, running the competition, attending it, appearing as guest artists and sending their own students.

The participants will compete for a number of prizes, with a total value of more than $350,000. The Gold Medalist will receive a cash prize of $75,000, a Carnegie Hall recital debut, a CD recording contract, and website development and maintenance for four years following the Competition. The Gold, Silver and Bronze Medalists will receive career management and international concert engagements for four years. All six Laureates will receive cash prizes and the opportunity to use one of several concert instruments in the IVCI collection, including the 1683 “ex-Gingold” Stradivari violin, until the next Quadrennial Competition in 2026.

In tandem with this year's competition, the International Violin Competition of Indianapolis (IVCI) also is presenting an exhibition of the Violins of Hope, a collection of 70 violins, violas and cellos compiled since the end of World War II. A "Violins of Hope Exhibit" is already open for viewing and will be open through the end of the competition at the Rhythm! Discovery Center in downtown Indianapolis.

The competition also is sponsoring a number of lectures, including:

And on the lighter side of things: The Indianapolis Competition has created a pseudo-bracket (they are calling it a Funnel-ology - click here to download) so you can predict who will go on to which rounds.