August 29, 2022, 10:09 PM · Leave it to violinist (and MacArthur genius) Vijay Gupta to take something traditional and old-fashioned and transform it into something urgent and relevant.

In this case, Gupta, founder of Street Symphony, held a "Schubertiade" - right next to Los Angeles's Skid Row.

But first, some context: what is a "Schubertiade"? The "Schubertiade" is a tradition that started in Vienna's high-class circles, back when the composer Franz Schubert (1797-1828) was still living. Artists, musicians and their wealthy patrons would gather in someone's home salon to share art, poetry and music - specifically the music of Schubert. Think something like this: 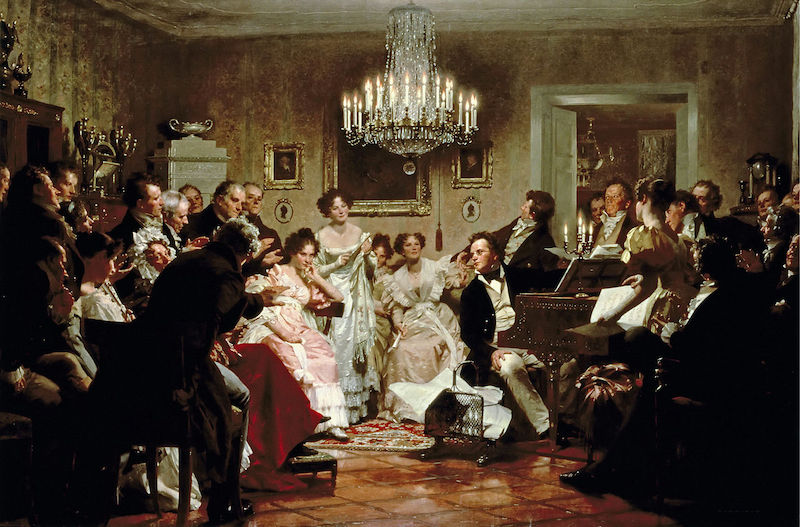 Yes, that's Schubert at the piano, and during the earliest Schubertiades, the composer himself performed, spoke, and generally held court.

Since then, the "Schubertiade" has evolved, and today's versions tend to be on a larger scale, with numerous festivals (particularly in Europe) devoted to the music of Schubert using the name "Schubertiade." The largest is the Schubertiade Vorarlberg, in Austria, with around 80 events and tens of thousands of visitors.

Gupta's idea hearkened back to those smaller-scale, early days. But with a twist - one might call his version a "Schubertiade" for Social Justice - a way to get comfortable people out of their comfort zones.

Gupta's "Schubertiade," a fundraiser for Street Symphony's Crossroads Series, was held at Inner City Arts, located right on the edge of Skid Row. It's a center of arts education for thousands of children, from kindergarten through high school, mostly from minority, immigrant, and low-income families, who come here from neighboring public schools for classes and activities.

To get to the concert, I drove into a part of town that I rarely visit, parked (a little nervously) in the designated parking area, and walked across the street. I entered through the same the tall, metal gates as the children do. And I felt a kind of relief, going from the streets of inner-city Los Angeles into that safe-feeling campus, filled with gardens and artwork.

I could understand, almost on a physical level, why such an institution is truly a haven for the children who create art here.

The lobby of the Rosenthal Theatre at Inner City Arts featured artwork by young people - paintings, sculptures and collages. On four easels were paintings whose relevance became apparent later - during the concert they were shown on a screen overhead, one for each movement of Schubert's quintet. 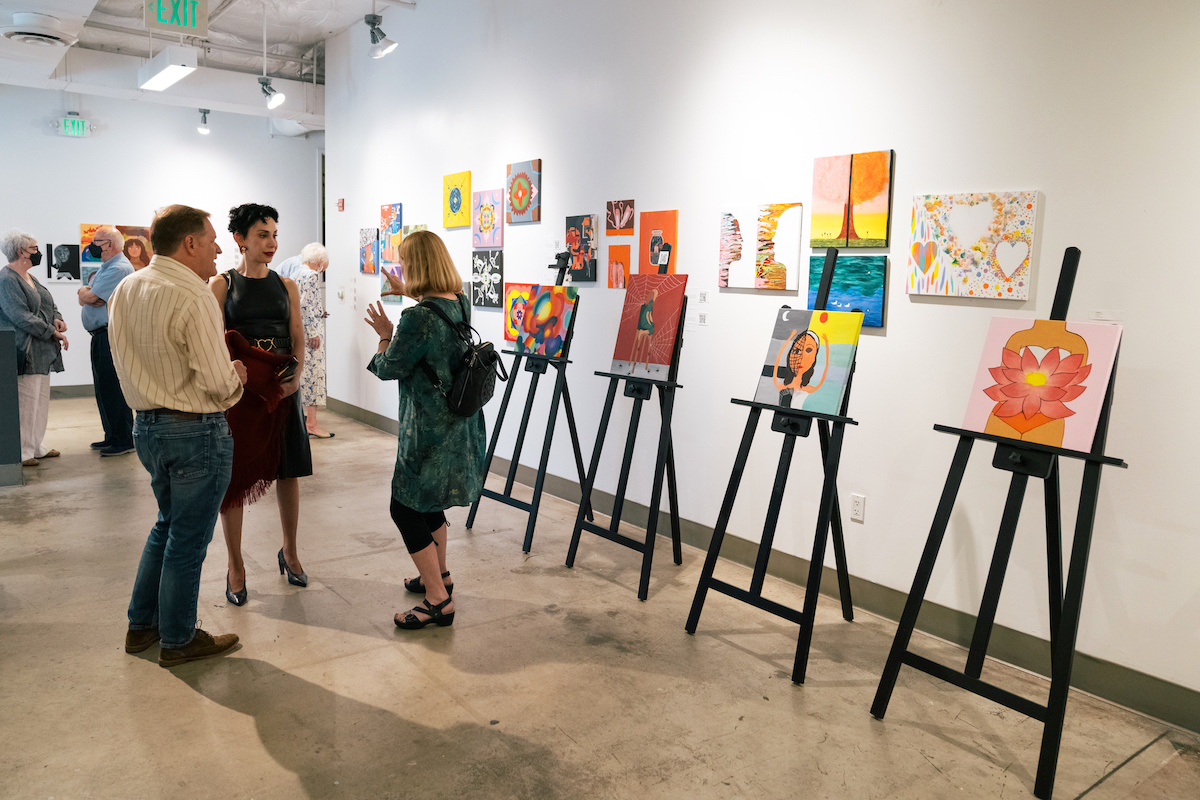 In the lobby of Rosenthal Theatre. Photo by Nicolette Herrera.

Like those early "Schubertiades," the audience for this concert was small and intimate - with about 45 people arranged in close proximity to the quintet in the black box theatre.

In his introductory words, Gupta said that "Skid Row is a place of new beginnings - it's the country's largest recovery zone. And the arts are a catalyst for these kinds of transformations."

The program featured just one work: Schubert's monumental String Quintet in C major, Op. 163, D. 956, performed by a group of top-rate musicians: Gupta, joined by violinist Jin-Shan Dai, violist Cara Pogossian, and cellists Jonathan Karoly (from the LA Phil) and Sarah Kim. The quintet is an hour-long musical exploration of the human spirit - it is Schubert's last completed work before he died at the age of 31. The work remained undiscovered for some time, laying unpublished until 30 years after his death. Quite possibly, Schubert never heard it played. Nonetheless, "Schubert's will to live is what you will hear," Gupta said.

Gupta explained that the musicians had been playing this quintet all week for people on Skid Row: for the Midnight Mission, for the Downtown Women's Center. Tonight's show would be modeled after the early "Schubertiades," with art, music, and story-telling, for an intimate audience. But it would look more like this: 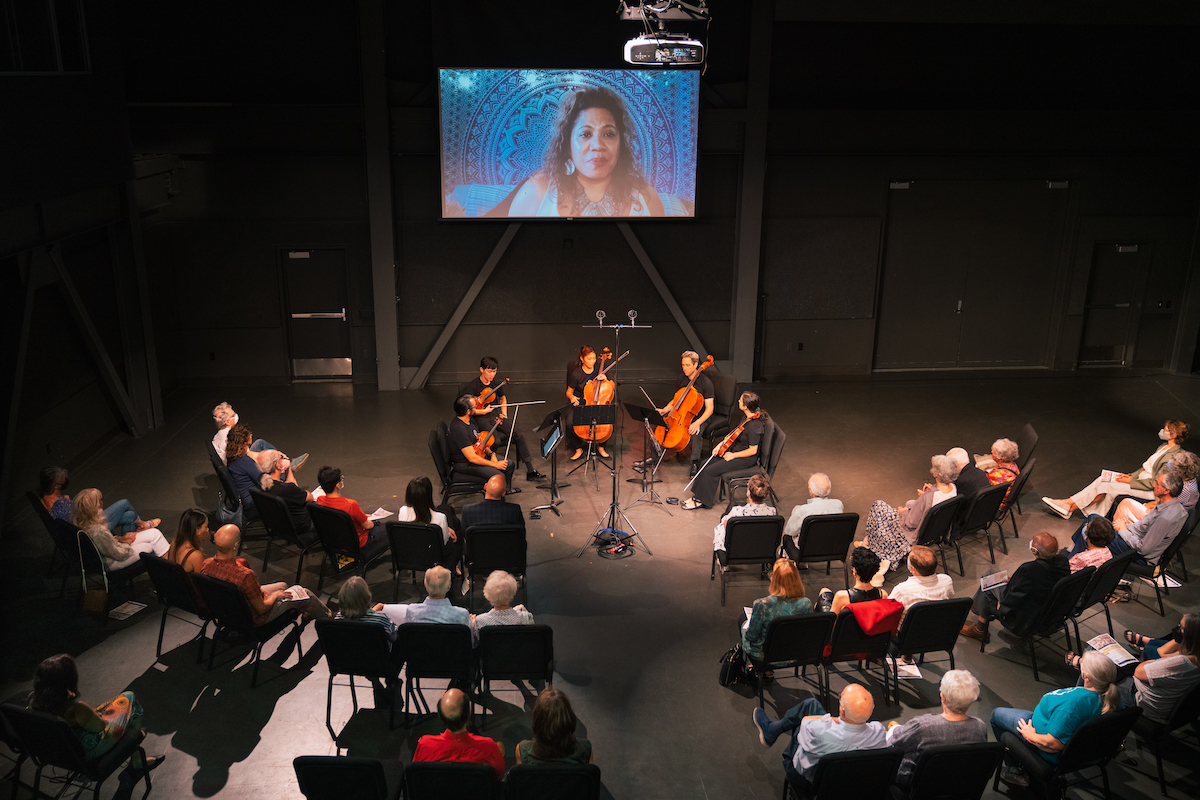 Before the music began, we were introduced to the evening's narrator, Bibiana Rosalia, who joined us via video. She had a story to relate, about one of those new beginnings on Skid Row. She told it between movements of the quintet.

The screen switched from Rosalia to one of the four paintings, and the music began.

Let's be clear: these musicians are all consummate collaborators, with gorgeous-sounding instruments. We were sitting so close to them, I felt like part of the ensemble, as though they were playing chamber music in my living room.

The musicians were wearing "Street Symphony" T-shirts, and I'm tempted say they were "relaxed," but it wasn't that. They weren't relaxed; they were charged with the music. Every musician seemed to have left any ego the door, allowing for a state of complete flow with the music and with each other. They seemed more aware of each other than of themselves, fluidly trading off whose voice was dominant. During the first-movement "Allegro ma non troppo," sometimes they were nearly jumping out of their seats with intensity; other times they brought the volume down to just a whisper. 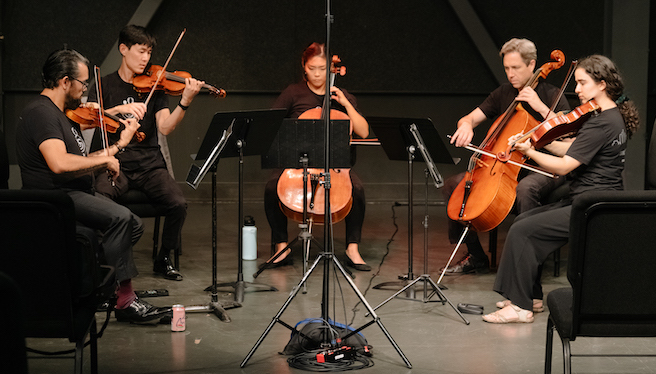 Against this backdrop, Rosalia began her story. A single mother who had lost her home in 2012, Rosalia was forced to move with her son to transitional housing. She knew she faced an uphill battle. The idea of getting a college degree or ever having a place of her own again seemed out of reach, but she was determined. She started to work, very hard.

The second movement "Adagio" of Schubert's quintet began as though weeping, yet against hopeful harmonies. There was melody, but a great deal of the strength was in the supporting roles - Gupta's strumming pizzicato, the ensemble's extended and controlled crescendos beneath the surface. The "slow movement" turned stormy, with mad triplets and syncopations. But then it slowed again - the heartbeat almost coming to a stop. It concluded with a return to the slow and weeping melody of the beginning.

One night while in transitional housing, Rosalia's son failed to return home, and she knew instinctually that something was terribly wrong. She called his cell phone repeatedly, until someone answered - she wound up talking with a nurse in the emergency room. He had been struck by a car and was terribly injured, with broken bones all over his body, including his neck. Afterwards he remained in the ICU for two weeks, and he came home in a wheelchair. Many people helped them during this time, and considering his serious injuries, her son recovered relatively quickly. "Art was his saving grace, to get through this period of time," she said.

The third-movement Scherzo began with exuberance and joy, in a brisk 3/4 time, with humor and energy. The Trio hardly seemed like it could be part of the same movement - the energy ebbed, a more serious mood took hold. Here Schubert seemed to be exploring the low sound available to him in a quintet with two cellos. Again, everything dropped down and slowed nearly to a stop, before bursting back into the exuberance of the beginning - an even more rollicking ride than before. Smiles crept across the musicians' faces, like they were trading inside jokes.

Against all odds and despite her son's terrible accident, Rosalia managed to earn her college degree in 2014 - in just two years. And remarkably, her son graduated from high school- on time - and went to college himself. "I learned that you can use what you are going through as a launching pad," she said. "Hardships can help you to grow."

The fourth-movement Allegretto felt was all about the dance - starting with a folk dance, then leading into more of a formal-sounding dance and trading between the two throughout. Toward the end it became a thicket of musical ideas, not seeming to know how to end, trying many times and then circling around for more endings.

Through the her hardships, Rosalia said that "I became a more compassionate person; I became a more empathetic person. You never know what another person is walking through. We are all lotus flowers, coming out of the mud. Blooming in the sun, but still rooted in the mud."

Street Symphony's "Crossroads Series" will present regular public performances of the programs they present in Skid Row. The next event will be on September 25 at the University of Southern California, featuring Gupta, cellist Yoshika Masuda and pianist Dominic Cheli. For more information, click here.

August 30, 2022 at 12:17 PM · Thank you for this review. What an incredible concert that must have been on many levels. Glad to know of this venue for classical music presentation. Gupta is a genius.

September 2, 2022 at 08:30 PM · Although not as highly themed, our orchestra has been in the habit of putting on a fall performance on Skid Row here in Vancouver. The Carnegie Community Centre at Main and Hastings was originally built in 1903 as one of the many Carnegie libraries that were built across North America. Although it fell into disrepair, in the 1980s it was rehabilitated into a community centre for the residents of the Downtown Eastside.

Although COVID-19 halted these concerts, we're about to start up again. Playing at the Carnegie has always been one of my favourite concerts. The audience is not composed of your average classical music buffs; they're less inhibited. People will wander in and out while we're playing, and might dance in the the back of the room if the music inspires them. I still remember a woman in the audience with tears streaming down her face during our performance of Un bel di, vedremo. And when we played Peer Gynt, they went absolutely nuts over Hall of the Mountain King - so much so that we played it again as an encore, to the same thunderous applause.

As we packed up afterwards and made our way out to the bus, these people came up to us, thanking us for the performance. It's a wonderful feeling to know that we can bring such joy to their lives, and I'm looking forward to doing it again.