August 24, 2022, 4:21 PM · Today a group of musicians from the former San Antonio Symphony announced the formation of a new orchestra, the San Antonio Philharmonic ("SA Phil"). 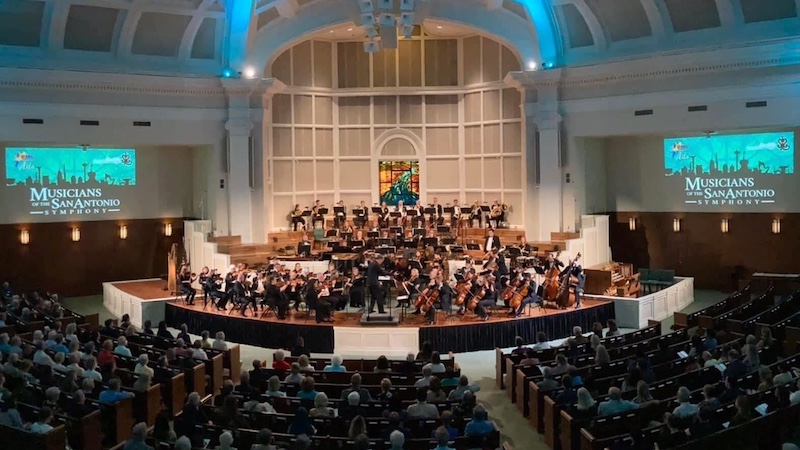 The "Musicians of the San Antonio Symphony" are now the "San Antonio Philharmonic." Photo from a concert last April, courtesy Mary Ellen Goree.

The San Antonio Symphony, with roots going as far back as 1887, filed bankruptcy and was dissolved by its board in mid-June. Those actions followed a cancelled 2021-22 season and many troubles preceding that.

The new Philharmonic has scheduled a 2022-23 season that features ten Classics Concerts and three Pops programs, which will take place at the First Baptist Church of San Antonio from September through May 2023. (Click here for information on concerts and subscriptions). Conductors will include Ken-David Masur, Sebastian Lang-Lessing, and Christopher Wilkins; with guest artists including pianists John Kimura Parker and William Wolfram, soprano Vanessa Becerra, and more yet to be announced. The orchestra will include 60-70 professional musicians - most of them from the former symphony.

The Philharmonic’s first concert series is scheduled for Sept. 16 and 17, when the orchestra will perform Ravel’s "Bolero" and selections from Prokofiev’s "Romeo and Juliet," with Masur conducting. The Philharmonic also will perform 36 free Young People’s Concerts for local elementary schools at nine local high school auditoriums.

"I’m looking forward to the San Antonio Philharmonic concerts, and to making music again with my wonderful San Antonio colleagues," said violinist Mary Ellen Goree, longtime Violinist.com member who served as principal second violinist in the symphony. "The San Antonio Philharmonic board has been working very hard to put together an exciting season. I’m so grateful to our board members for their hard work and to our community for their ongoing support."


"Our programming and outreach will honor the history, diversity, and culture of our city," Petkovich said. "We are seeking ways to involve new audiences in the transformative power of music by partnering with organizations around the city.

"When the San Antonio Symphony management ceased operations in June 2022, the musicians – some of whom won their seats in the 1970s and ‘80s — were determined to preserve world-class music in San Antonio," read a statement on the orchestra's new website. "With their formation of the San Antonio Philharmonic, we all have an historic opportunity to re-invent what an orchestra in the 21st century can be."

"We are deeply grateful for the last-minute efforts by conductors and soloists who made this season possible," Petkovich said. "They deserve special recognition. We face challenges but look forward to growing a great organization together."

August 25, 2022 at 12:57 AM · Congratulations! I remember when the Denver Symphony re-formed as the Colorado Symphony under a musician-led group. That was over 30 years ago and they are still in operation today. I wish the SA Phil great success. I'm particularly thrilled to see the ratio of classical to pops concerts. (Also, very happy that "our" Mary Ellen Gore can move forward with this wonderful orchestra!)

August 25, 2022 at 01:20 AM · I'm humbled by the levels of industry and integrity that this outcome required among the musicians and friends who made it happen.

August 25, 2022 at 02:08 AM · My colleagues on the new board worked tirelessly all summer in preparation for today’s announcement. Looking forward to a great season!

August 25, 2022 at 07:00 AM · This is great news, Mary Ellen, and the planned programmes are really attractive. Calm seas and prosperous voyage for the San Antonio Philharmonic!

August 25, 2022 at 04:07 PM · This is great! It's nice to hear that y'all got great collaborative musicians. William Wolfram is a MUST HEAR pianist!

It doesn't look as though they'll be playing too much avant garde stuff. If they were to, they might have to change the name again to the San Antonio Phobharmonic!

August 29, 2022 at 02:57 PM · The programming is constrained by cost (new music is expensive to acquire the music and the rights for) and availability (see previous). We do not have access to the music library of the former San Antonio Symphony, which is in the hands of the bankruptcy trustee. I think we have an impressively varied amount of programming under the circumstances. We hope in the future to expand our programming and our reach.

August 31, 2022 at 08:43 AM · John: no getting away from it: the old wine is usually the best wine, and Mendelssohn was a good vintage! I agree with Mary Ellen that the programmes are attractive. I heard two premieres last season: one, for a huge orchestra, was shocking, showing no sense of rhythm, melody, harmony, structure... . The much better one, a clever little work for the viola section of a local orchestra, showed skill and craftsmanship. With contemporary music you may win, but you often lose.