August 14, 2022, 2:18 AM · It's been a busy week for the Los Angeles Philharmonic at the Hollywood Bowl - in the span of five days they played four performances with three completely different, full programs featuring three different artists, with three different guest conductors.

I attended two of the concerts, starting with Thursday's concert, featuring violist Teng Li playing Paganini and the orchestra playing Scheherazade with conductor Lina González-Granados, in her first-ever appearance with the orchestra at the Bowl. Then the next day, I watched Joshua Bell playing the Tchaikovsky Concerto and the orchestra playing the 1812 Overture (with fireworks), plus some pieces from the Nutcracker and a piece by Bramwell Tovey, who had been scheduled to conduct before he passed away last month. That program, conducted by Ludovic Morlot, was repeated Saturday. I missed Tuesday's performance of Dvorak's New World Symphony, with violinist Pekka Kuuisisto playing Daníel Bjarnason's 2017 piece, "Scordatura," with conductor Dalia Stasevska, also giving her first performance with the orchestra at the Bowl. 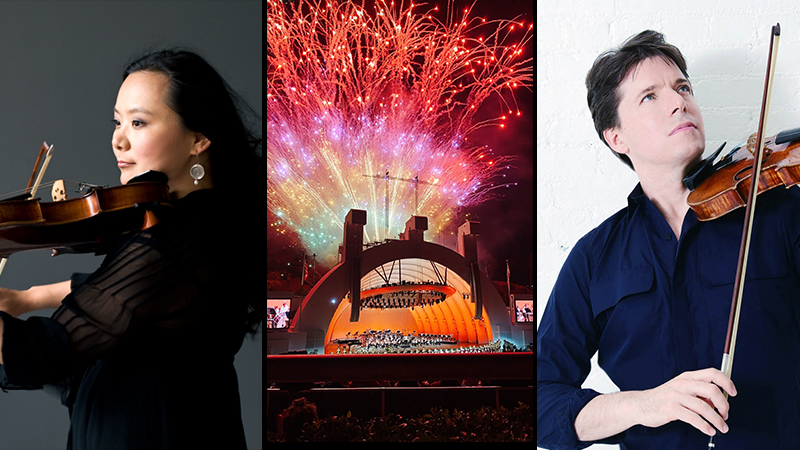 That's a lot. Certainly there were some amazing moments of music, but on both nights that I attended, the stress did show. It was hard to ignore the lack of cohesion between orchestra and conductor and the sense of everyone rallying to get through it all.

Why set things up this way, with such a brutal lack of time to prepare? It puts the conductor at a distinct disadvantage with the group, with the music, with the public. And yes, even a world-class orchestra playing largely familiar works needs time to gel with each other, with a conductor's ideas, with the music. This is not a push-button streaming service.

It's not every day that the viola gets center stage, so Thursday represented a big win when Principal Violist Teng Li performed Paganini's Sonata per la Grand Viola. Of course, the Hollywood Bowl, an enormous outdoor venue in Los Angeles that can seat up to 17,500 audience members, is not exactly an intimate space. Yet this convincing and assured soloist managed to project the delicacy and detail of a piece clearly written for a smaller, acoustic space. The large screens on the side of the stage helped bring her closer, as did the Bowl's legendary system of amplification.

But the real work fell to Teng Li, who served up some amazing technique: a mad-wicked up-bow staccato, fast precision trills and high-climbing arpeggios that landed firmly in what would be the insanely high, upper-altitude nosebleed regions of the E string, but on the viola - unbelievably it was the A string.

Her double-stops flowed like they were effortless (we know better), and she played with easy confidence and a loose vibrato, drawing a gorgeous voice from the 500-year-old Peregrino di Zanetto viola she plays. That instrument sang with the ages, with relaxed melodies pouring out even as a helicopter flew over the Bowl or a police siren rang from the highway below. There was humor and poignancy, as well as that daring Paganini attitude.

The orchestra's part was straightforward - for example, as the soloist executed insanely virtuosic acrobatics on the viola, the flute played a simple simple melody. I felt the danger a few times when González-Granados and the orchestra seemed to push forward in places like this, but Teng Li seemed to be capable of handling any tempo that was served up.

The concert actually opened with a 2020 piece called "Lumina" by Nina Shekhar, an atmospheric piece meant to "explore the spectrum of light and dark and the murkiness in between." It featured sliding strings, the plinking of the harp and other effects, with the texture growing thick and cinematic toward the end.

Thursday's concert also put the spotlight on many of the fine musicians in this world-class orchestra - during the second half, Rimsky-Korsakov's "Scheherazade" featured solos by first associate concertmaster Nathan Cole, as well as about a dozen other musicians in the orchestra, some who were regular principals and some not.

The piece is based on 1,001 Arabian Nights, and Cole's solos represent Scheherazade, who tells a series of stories to forestall her own death at the hands of her angry husband-to-be. By telling him a suspenseful story with a cliffhanger each night, she keeps him wanting to hear more - thus keeping her around for another day.

Cole's solos did not disappoint - starting with a beautiful rendition of the sweet and familiar opening, with solos in the other movements featuring lilting spiccato bariolage, hefty low double stops and more. This Scheherazade was a confident story-teller with a solid plan.

I wish I had names for all the soloists in the orchestra, but there was amazing playing from the contrabassoonist and an oboe solo with marvelous pacing and execution. Burt Hara's clarinet solos were incredibly dynamic.

And yet... at one point during the second movement, the big screen showed eyes turning to concertmaster Cole for guidance on tempo. The third movement overall was a bit breathless, without much ebb for the flow. We just needed that gel.

(Also, I realized that the very end of this piece sounds a bit like a chord progression from "Succession" for about seven seconds. Of course, Rimsky-Korsakov was first. But I digress.)

Friday night attracted about three times as many concert-goers to the Hollywood Bowl as did Thursday night, with every parking lot, park-and-ride and shuttle bus in the area completely booked for days in advance. The concert was a celebration of the Hollywood Bowl's 100th anniversary, promising fireworks at the end in a performance of the 1812 Overture that also brought the University of Southern California Trojan Marching Band to stage to fortify the explosive conclusion.

It also featured a performance of the Tchaikovsky Violin Concerto by violinist Joshua Bell, who came on stage after several pieces: the concert began with the Ukrainian National Anthem, then the orchestra played "Waltz of the Flowers" from The Nutcracker.

Next came Bell's Tchaikovsky concerto, which moved at a brisk tempo. While it no longer feels unusual for audience members to clap between movements in a piece like this, the Hollywood Bowl audience outdid itself on this night. They applauded before the first half of the first movement was over, at the first big orchestral interlude. In fact, in the first movement there was applause for nearly every pause in the music - at the beginning of the cadenza, then after a high note in the cadenza (which was accompanied the entire time by a helicopter) and then of course, at the end of the first movement. Bell continued to play on the forward side of the beat, and I wondered if he was simply trying to forestall all the random applause. The last movement seemed to fit best with the entire situation, frenetic and fast, flying the whole time and sounding great - with no doubt as to where to applaud!

The second half of the concert opened with a tribute to conductor Bramwell Tovey, who originally had been scheduled to conduct the concert, but died last month from cancer at age 69. To honor him, they showed a video montage that highlighted his humor and talent. Then the orchestra played a piece written by Tovey called "Urban Runway," a jazzy and good-humored musical reflection on those who strut big-city fashion.

And then -- the "Pas de Deux" from the Nutcracker. (Did this concert need padding?)

As described before, the concert concluded with Tchaikovsky's 1812 Overture, a glorification of Russian triumph in war that might be a bit at odds with that Ukrainian National Anthem that started the concert.

Nonetheless, the coordination between music and fireworks that started in the latter part of the piece were incredibly impressive, with details like sparkling fireworks for tremolos, single fireballs in sequence to punctuate a musical line, thinner or thicker fireworks to match the texture of the music, and everything impeccably timed. What a spectacle! If a concert is supposed to end with something fast and loud, this one certainly delivered.