June 8, 2022, 2:13 PM · The c. 1679 "Hellier" Stradivari violin - a rare example of the master violin maker's elaborate inlay work - is scheduled to be auctioned at Christie's Exceptional Sale in London on July 7. 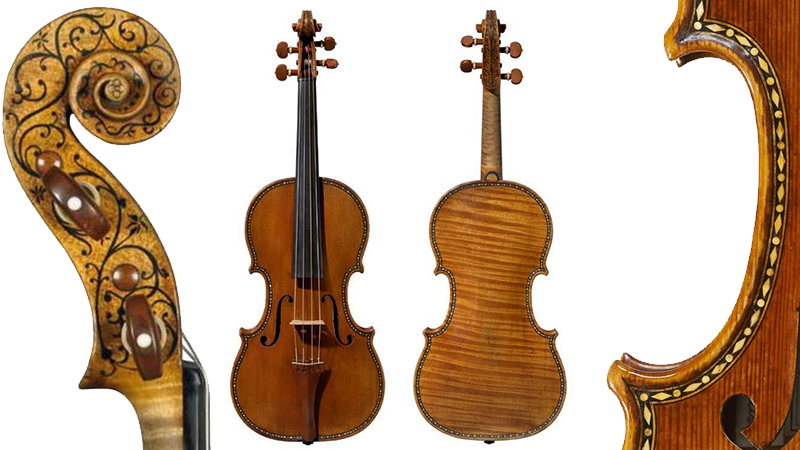 The instrument is significant for a number of reasons. First is its unusual and highly decorative inlay work, which on the front and back includes 500 precious gems between two rows of purfling: sculpted ivory circles alternating with delicately engraved ivory diamonds. That's not all - seen from the side, the ribs and pegbox also feature silhouettes of flowers and vines that are etched into the wood and filled with an ebony mastic.

Also significant are the Hellier's proportions, which mark Stradivari's first major departure from the traditional proportions of Nicolo Amati's violins. The violin's "scaled-up" design gives it it a greater volume of tone from previous violins, and those proportions served as a blueprint for future violin models.

The "Hellier" was among the early violins made by Antonio Stradivari (1644-1737), and he reportedly kept the instrument for 55 years before selling it in 1734 for £40 to Sir Samuel Hellier of Wombourne, England. The violin remained with the Hellier family for more than a century before being sold in 1880.

According to Christie's, other owners have included newspaper tycoon Henry E. Morris and American collector Henry Hottinger, and the violin has been displayed recently at both the Smithsonian Institution and the Museo Civico in Cremona.

Prior to the sale, the "Hellier" Stradivari violin will be on view at Christie’s London in "The Art of Literature: Auction Highlights Exhibition," June 6-15, then it will be shown at the "The Exceptional Sale" pre-sale exhibition, July 2-7.