June 5, 2022, 1:45 PM · Welcome to "For the Record," Violinist.com's weekly roundup of new releases of recordings by violinists, violists, cellists and other classical musicians. We hope it helps you keep track of your favorite artists, as well as find some new ones to add to your listening! 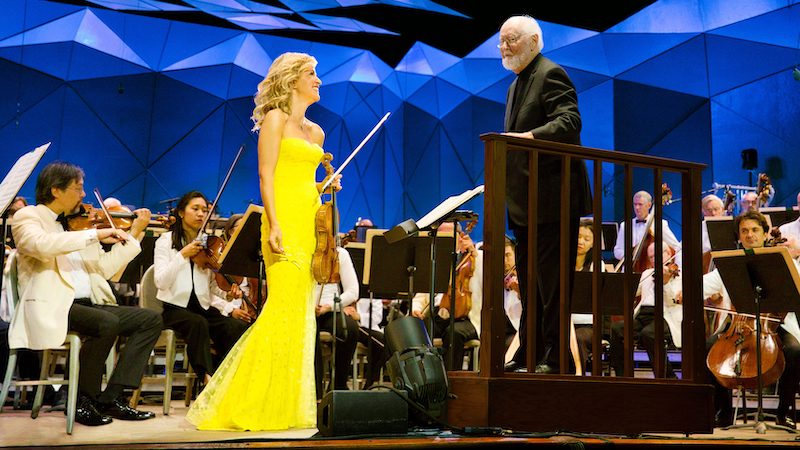 It's the world premiere recording of John Williams’ Violin Concerto No. 2, written for and recorded by the composer’s friend and frequent collaborator, violinist Anne-Sophie Mutter. "I can only think of this piece as being about Anne-Sophie. I took my inspiration and energy directly from this great artist herself," said Williams. And from Anne-Sophie Mutter: "It has been a lifelong dream of mine to have John Williams compose a concerto for me." The album also includes three film themes, newly arranged by Williams for violin: the Theme from The Long Goodbye, "Han Solo and the Princess" from The Empire Strikes Back, and “Marion’s Theme” from the Raiders of the Lost Ark. BELOW: John Williams' Violin Concerto No. 2: II. Rounds:

Violinist Itamar Zorman's new album grew from his 2020 live-streamed video series Hidden Gems, created while the world was locked down and live-concerts were stalled. That project yielded the discovery of many lesser-known and rarely played works for violin. Zorman selected 10 of those pieces that show a range of styles and cultures, with repertoire from New Zealand, the United States, Sudan, China, Russia, Poland, Croatia, Czech Republic, Israel and Mexico. Itamar also chose a piece composed by his father Moshe Zorman in Israel, explored pieces written for children with his small daughter, and collaborated closely with his wife, pianist Liza Stepanova, who accompanied him on the first Hidden Gems live-streams. BELOW: Excerpts from the album:

During the pandemic, Los Angeles-based British violinist Maya Magub – like so many others – turned to music for solace. Her new recording includes Six Consolations by Franz Liszt, arranged for violin and piano by Magub herself. She rounded out the album with a few more favorites - Meditation from Thaïs by Massenet, Handel's Largo from Xerxes, and Gounod's Ave Maria. "What greater consolation than music, an art form which expresses that which cannot be expressed in words," Magub said. BELOW: Magub talks about her new album.