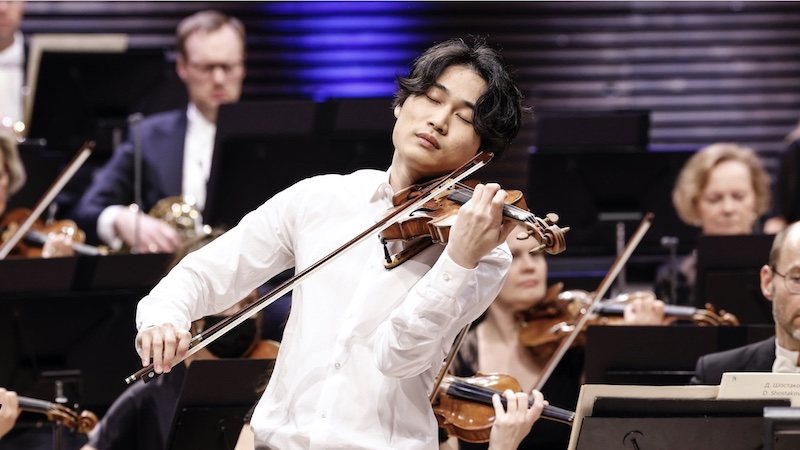 Here is a list of the other prize winners:

The other three finalists, Diana Adamyan, of Armenia; Yesong Sophie Lee, 18 of the U.S.; and Georgii Moroz, of Ukraine each received a recognition prize of €3,000. Semi-finalists were awarded the Sibelius stipend of 1,000 euros.

Inmo Yang currently is based in Berlin, where he is pursuing a master’s degree, studyingwith Antje Weithaas at Hochschule für Musik "Hanns Eisler." Before that he studied with Miriam Fried at the New England Conservatory of Music, where he was the only violinist in its highly selective Artist Diploma program. In 2015 he won first-prize in the International Paganini Violin Competition in Genoa, Italy, Yang also has released two albums, Paganini: 24 Caprices (2019) and The Genetics of Strings (2021). Yang plays on the c. 1718 "Bostonian" Stradivarius, on loan from a private donor.

As part of his first-prize package Yang also received the loan of a 1772 Giovanni Battista Guadagnini violin, loaned by Jane Ng through J & A Beare and the Beare’s International Violin Society. He also will receive mentoring from Pekka Kuusisto and Sakari Oramo. The Sibelius family also awarded Inmo Yang a prize of €2,000 for the best performance of Magnus Lindberg's commissioned work, "Caprice."

BELOW: Inmo Yang performs the Sibelius Violin Concerto at the 2015 Paganini Competition:

A record 240 violinists applied for the competition this year, 39 of whom participated in the competition. Due to the war in Ukraine, Russian competitors were excluded from the 2022 competition. The next International Jean Sibelius Violin Competition will be held in 2025.

Firstly, heartiest Congratulations to South Korean Violinist, Inmo Yang, for his Gold Medal in the Sibelius International Violin Competition 2022, held in this unusual year due to the global Pandemic which prevented the 'normal' 2020 Sibelius from being held ... As a former SIVC competitor representing the US, although living in London, UK, at the time on the Fulbright, I can attest to the rigorous-ness of the Competition as experienced in the depths of Finnish Winter, in November and earlier December, 1965! The opportunity for a very young and full of Love for Sibelius Works including his Epic Violin Concerto were the motivating factor's for my reason to travel to then unknown to me Helsinki, FI, to feel & sense the physical Geology of Jean Sibelius, Master Composer, & possibly the 'Greatest Moral Composer' following Ludwig van Beethoven!

Although one's mentor in London, warned me of 'headwinds' to possibly be met in this newly & lovingly created International Violin Competition with debut held to commemorate the 100th

Birthday of Jean Sibelius, Soul of Finland and Finnish People, one ignored counsel of a very experienced knowing much of the Jury system at the time, Lasserson, to follow one's musical and emotional heart!

Entering the second only most important International Violin Competition excepting the Tchaikovsky, has to be more than challenging & I can verify this with factual experience having been fortunate just prior to the First Sibelius, that one was on an International Scandinavian Concert Tour of Denmark, first playing Sibelius' Violin Concerto in Copenhagen, & receipt of a glorious violin from Emil Hjorth & Sons in Copenhagen, "to try out during the rest of your concerts, Elisabeth!" (Quote, Mr. A. Hjjorth, in his gorgeous office containing a few of the world's finest concert violins), & a surreal shock such a famed Violin Luthier would hand over a gem from Great Violins to a barely known to him pupil of Jascha Heifetz, who came along to the Shop due to leaving for Copenhagen Airport afterward & not wishing to miss the Concert Touring Orchestra flight going to Stockholm! My father, so overwhelmed w/Mr. Hjorth's gesture, offered his gold watch as a Faith Object to guarantee return of

the gloried Violin which we expected to say Good bye to after a last Concert in Bergen, Norway! It was a remarkable musical violinistic foray into the possibilities afforded by such a Violin with a fabled Name Of history!! The Love of Sibelius is hailed throughout all Scandinavia, as felt in concert halls performed-recorded in! It was Oslo, which changed everything & by God's grace, playing on an 'experienced' violin which gave more than All to its new temporary 'resident', yours truly, 'we' offered the great Violin Concerto of Jean Sibelius in Oslo's Aula Hall with an immense gratitude & sure footedness fully knowing this was 'Sibelius Rare' on a Grand Violin! This initial Concert Tour experience prepared me to go to Helsinki, with no thoughts of winning a Medal yet to 'feel' the hallowed (to me) landscape of Sibelius in Finnish Winter!!

Without the above, the 'Special Award for Best Solo Bach in Violin' w/Invite from All Five Sibelius Daughter's to play their father's 'Adagio di molto' from his Violin Concerto at the Official Finnish Government Inaugural Concert/Ceremony in the birth-house of Jean Sibelius, (in *Hameenlinna, FI} would never have occurred! To now share, just know an American very young Violinist, whom mentor, Jascha Heifetz, had previously heard in the Sibelius VC & given me his 'Heifetz Thumbs Up' was overwhelmed to perform the Master's Slow Movement & a solemn Prayer to me, before All Five Sibelius Daughter's, a younger Sibelius brother, other Sibelius Family; Jury Head, M. Oramo {possibly father of Sakari Oramo, Jury Head 22}, plus other Jury members and Finnish Minister of Culture with later receipt of Flowers placed on the eldest Sibelius daughter's lap, following our performance in the LR of the boy, Sibelius, then proclaimed the 'Sibelius National Memorial Museum' on that bitter freezing December 8th,1965 Centennial Birthday of Jean Sibelius, {+ 8 TV Cameras filming/televising us globally and via Eurovision}, in mighty squished quarters!

Never before having publicly written of my beginning Sibelius Violin Concerto Saga, it does seem Time to make mention of to inspire fellow young generation violinists to fall in Sibelius Violin Concerto love plus other Classic's then create specific performance opportunities so when Anno 2025 rolls around on January 1st, be readied to go to Helsinki, for All Right reasons to sense the environment in depths of Finnish Winter & learn of The Master's Life on his Farm, steeped in 20 ft snowbanks on jagged rock terrain awakening insight's to Sibelius' Homage to Finland & Her People!

This, my violinist friends, is The Way to a Sibelius Baptism on Finnish Soil Forever ~

With thanks to Editor, Laurie Niles, for highlighting the Sibelius International Violin Competition 2022, & kindness allowing me to share treasured memories of a Once in a Lifetime Event, meeting All Five Daughter's of Greatest Finnish Composer, Jean Sibelius, given then ailing Madam Sibelius' homegrown in her Finnish Garden precious Flowers, 'as our Present, Ms Matesky, for playing the 'Adagio di molto' from father's violin concerto beautifully, & being with us for our father's 100th Birthday!', this is a Coda to my Lifetime Sibelius Saga ...

With warm Sibelius Greeting's to All Six Finalists, Families of and dedicated Violin Mentor's, I remain

~ Yours musically & violinistically from Chicago ~