Interview with Violinist Johnny Gandelsman: This Is America

May 16, 2022, 12:55 PM · When the pandemic struck, Brooklyn-based violinist Johnny Gandelsman was already deep into solo Bach, having recorded the Complete Sonatas and Partitas for Solo Violin in 2018 and with performances lined up for 2020 of Bach’s Complete Cello Suites on the violin, which he had just recorded.

So during those locked-down days of solitude and social upheaval, while many string players turned for comfort to Bach's centuries-old works for solo violin and cello, the Grammy Award-winning Gandelsman also craved something new, to express the raw emotions brought about by these unprecedented times.

He decided to put together a major commissioning and recording project that would create a series of new works for solo violin, calling the series This Is America. 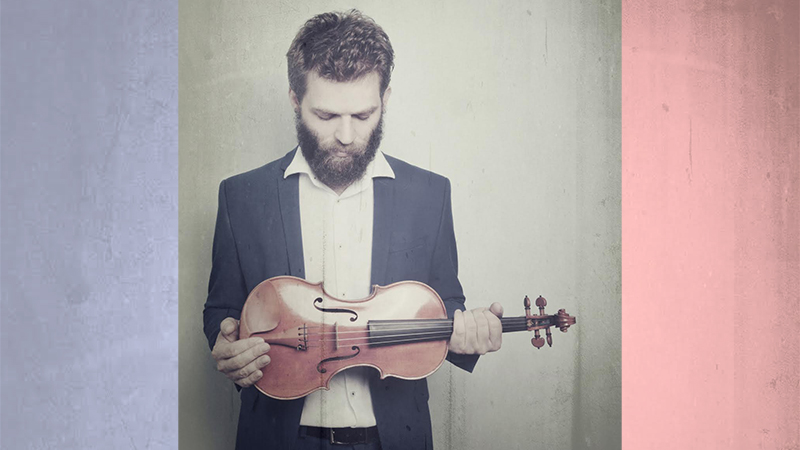 Working with funding from 20 arts organizations in 11 states and Washington, D.C., he commissioned 22 new works for solo violin, asking living American composers to write musical reflections of the times we are living through. As he describes it, the project is like a series of "musical diaries" for the years 2020-21.

Gandelsman has lived in America since the 90s, when he came here to study at the Curtis Institute, after being born in Moscow and raised in Russia and Israel. His musical explorations have ranged well beyond classical music, working with his quartet, Brooklyn Rider, and Yo-Yo Ma's Silkroad Ensemble. Even before this major commissioning project, he had premiered dozens of new works.

The works in "This is America" have been trickling out over the last season, as Gandelsman has performed world premieres and selections from the collection in concerts around the country. A recording of the entire project is scheduled for release on July 1, with proceeds from pre-orders going to support Ukrainian refugees.

On Thursday he will perform eight pieces from "This Is America" at The Wallis in Beverly Hills, Calif. (Click here for more information about the concert.) Two pieces will be world premieres: Aeryn Santillan's withdraw, commissioned by The Wallis, and Kojiro Umezaki’s Breathe. Gandelsman will also perform works by Akshaya Avril Tucker; Tomeka Reid; Ebun Oguntola; Rhea Fowler and Micaela Tobin; and Rhiannon Giddens.

Here is our interview with Johnny about how this "This Is America" came to be and what he has learned in channelling the voices and new music of so many different American composers.

Laurie: What thought process led to the idea for "This is America"?

Johnny: The project developed at the height of the pandemic. On March 16th, 2020, my family packed our Subaru Outback and left Brooklyn for a small place on a lake in the White Mountains region of New Hampshire. We thought we were leaving for two to three weeks. Little did we know that we would spend the next six months away from home.

While there, we watched in horror as the country got slammed by Covid, George Floyd was murdered, wild fires ravaged California, and the election cycle escalated to an unprecedented level of volatility. Across the country, the national conversation seemed to focus on what America was, is, or should be. The tone was lacking inquiry; instead, it was full of certainty and a lot of anger.

It was strange to be in this idyllic place in New Hampshire, far away from our community during that time. In thinking about ways one person could make a small difference, it occurred to me that in many ways amplifying voices of others, whether it's those of centuries past, or ones of today, is an essential part of being a Classical musician. I decided to commission new works for violin from American and U.S.-based composers, asking each one to reflect in some way on the time we were all living through. I hoped that through their work, a more nuanced picture of America could emerge.

Laurie: How did you choose the specific 24 composers that would participate in "This is America"?

Johnny: I love lists - music, books, composers - you name it. The list of composers and musicians whose work I find interesting is quite long, much longer than the ones who ended up on the (first) edition of the anthology. I did want to try and represent this country in as many ways as possible: age, creative process, gender, genre, cultural background were all things I considered.

I also got some very much-needed and appreciated advice from Gabriela Lena Frank, the godmother of so many young composers in the U.S., who pointed me in the direction of some fascinating people whose work was previously unfamiliar to me: Layale Chaker, a fabulous violinist and composer, whose piece is featured in the album; and the great organization Luna Composition Lab, led by Missy Mazzoli and Ellen Reid, which provides mentorship and performance opportunities to young composers who are female, non-binary or gender non-conforming.

Laurie: It sounds like the idea was to embrace the diversity of America, but in these diverse voices are you finding any themes or threads that run through all of them? In other words, do these 24 pieces reveal anything about what we have in common as Americans?

Johnny: I think the main takeaway from this project is that there is no simple way to define what being an American is. There are so many contradictions. To me, remembering that we are all immigrants is essential - that's what makes America truly great. The melting pot of cultures, the possibility of being exposed to something unfamiliar and beautiful at any moment.

Laurie:Have you been surprised by any of the pieces?

Johnny: Sure, most pieces were surprising in some way. For this record, I had to figure out how to play the tenor guitar, sing, and expand my limited improvisation skills - all things that were challenging in ways that made me fearful, and that relates to the rhetoric one so often hears these days, not only in America but around the world. We are afraid of ideas or people we don't know or understand, and that is the cause of so much pain and suffering around the world. The process of working, with composers, through that fear -- was humbling and illuminating. I wish everyone could have that kind of gentle guidance when faced with the world of the unfamiliar.

Laurie: What have you learned about America and American voices through doing this project?

Johnny: Another takeaway is that there are literally thousands of voices in this country that deserve to, no - need to be heard on the concert stage. My dear friend Katherine Needleman, principal oboist of the Baltimore Symphony and a newly appointed oboe teacher at the Curtis Institute, has been doing amazing work on social media, posting statistics of major U.S. orchestras and festivals, and their programming. The numbers of women and/or non-white conductors, soloists and composers featured on any given season are truly terrible. There is simply no excuse for it - there are so many brilliant people out there, doing incredible work. Our whole community must do better.

Laurie: At what point will all of the pieces have been premiered?

Johnny: Most works have been premiered during the 21-22 season. The show at The Wallis will feature two premieres: "Breathe" by Kojiro Umezaki, generously commissioned by the Hopkins Center at Dartmouth College; and "withdraw" by Aeryn Santillan, generously commissioned by The Wallis. A few will premiere in the 22-23 season; there is also a plan in motion to expand the collection further, so I expect to have plenty to do in the next few seasons.

Laurie: Do you plan to make the sheet music available for other violinists to play? Is that already possible for any of the pieces?

Johnny: Yes, that's the goal! Everything that has already been premiered can be played by other violinists, and the rest should be available as soon as those works get their premieres. The best way to find scores would be to contact each composer through their individual websites.

May 17, 2022 at 02:29 PM · My first response was "I wish we could listen to music without making it about politics and 'giving voice.' Everything isn't always about politics, including identity politics. Why not choose your music based on the music?"

But then as I read Johnny Gandelsman's website, I liked this description of the project:

"I decided to commission new works for violin from American and US-based composers, asking each one to reflect in some way on the time we were all living through. Some, like Kinan Azmeh, Christina Courtin and Kojiro Umezaki have been dear friends for decades; others like Maya Miro Johnson, Ebun Oguntola and Anjna Swaminathan were new connections; all were musicians whose artistry I respect and admire."

In fact I decided to pre-order the 3-CD set, how exciting it will be to hear a bunch of new music for violin (and other instruments and voices)!

May 19, 2022 at 05:32 AM · Well, for what little it's worth, I have suggested that composers try a few dance forms other than the traditional North-Western European ones such as the galliard, the minuet, the allemande (and a few Spanish and Italian ones such as the sarabande and the courant) as the basis for their compositions. There's the cakewalk, the Charleton, the jitterbug, and a fair number of others; besides of course, the ones like the hula from the Pacific islands, the ones from the First Nations ... and I wonder if Johhnny Gandelsman would have the courage to commission a Palestinian-American composition student to write a composition based on Palestinian dance forms?