May 15, 2022, 2:04 PM · Violinist MingHuan Xu, a concert performer who is director of the string program at Roosevelt University, reports that three instruments were stolen from her town home in Chicago's South Loop on Wednesday morning, as her family slept. One was a 1758 Nicolò Gagliano violin that had been on loan to her by a private sponsor for 20 years. A $10,000 reward is being offered for the recovery of the violin. 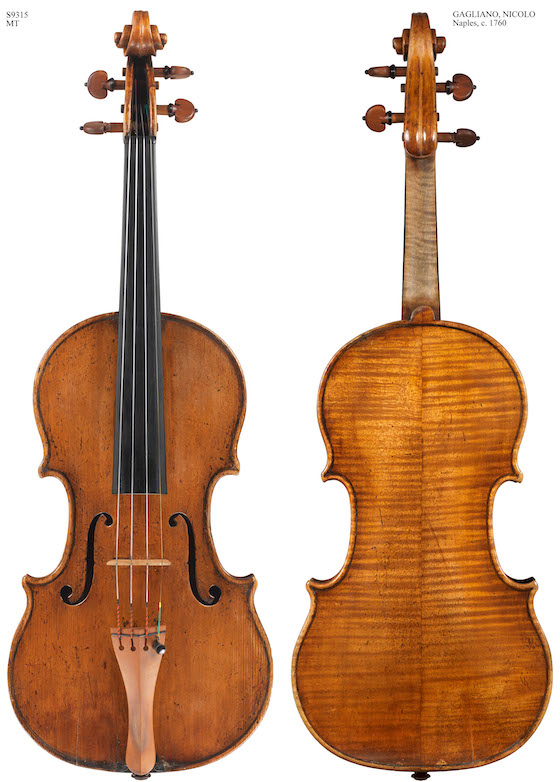 1758 Nicolò Gagliano that was reported stolen last Wednesday in Chicago.

"This violin has been such a companion to me throughout my musical journey. Losing it is like losing a family member," Xu said. "Even though I am extremely grateful that we came out of this physically unharmed, my heart is shattered."

Also reported stolen was a violin made by Oliver Radke in the late 1990s and a half-size cello that her son played.

The Gagliano was in a purple hard-shell violin case by William Harris Lee & Co., decorated with some flower and butterfly stickers. The violin was insured.

Xu, who plays in the Ensemble Dal Niente and the Grossman Ensemble, had been preparing for a performance at the University of Chicago on May 20.

"According to surveillance cameras in her neighbor’s garage, the suspect entered her house around 3:45 a.m. while the family was sleeping after being able to open Xu’s closed car and clicking the garage button inside the car," said a report in the Chicago Tribune. "The family didn’t realize someone had been inside their home until 4:37 a.m. when one of their alarms activated."

Xu said she did not think it was a targeted burglary.

A $10,000 reward is being offered for the recovery of the stolen violin. If you have any information about the stolen Gagliano violin or other instruments, please contact the Chicago Police Department by calling 312-744-8263. Below is a flyer with additional information: 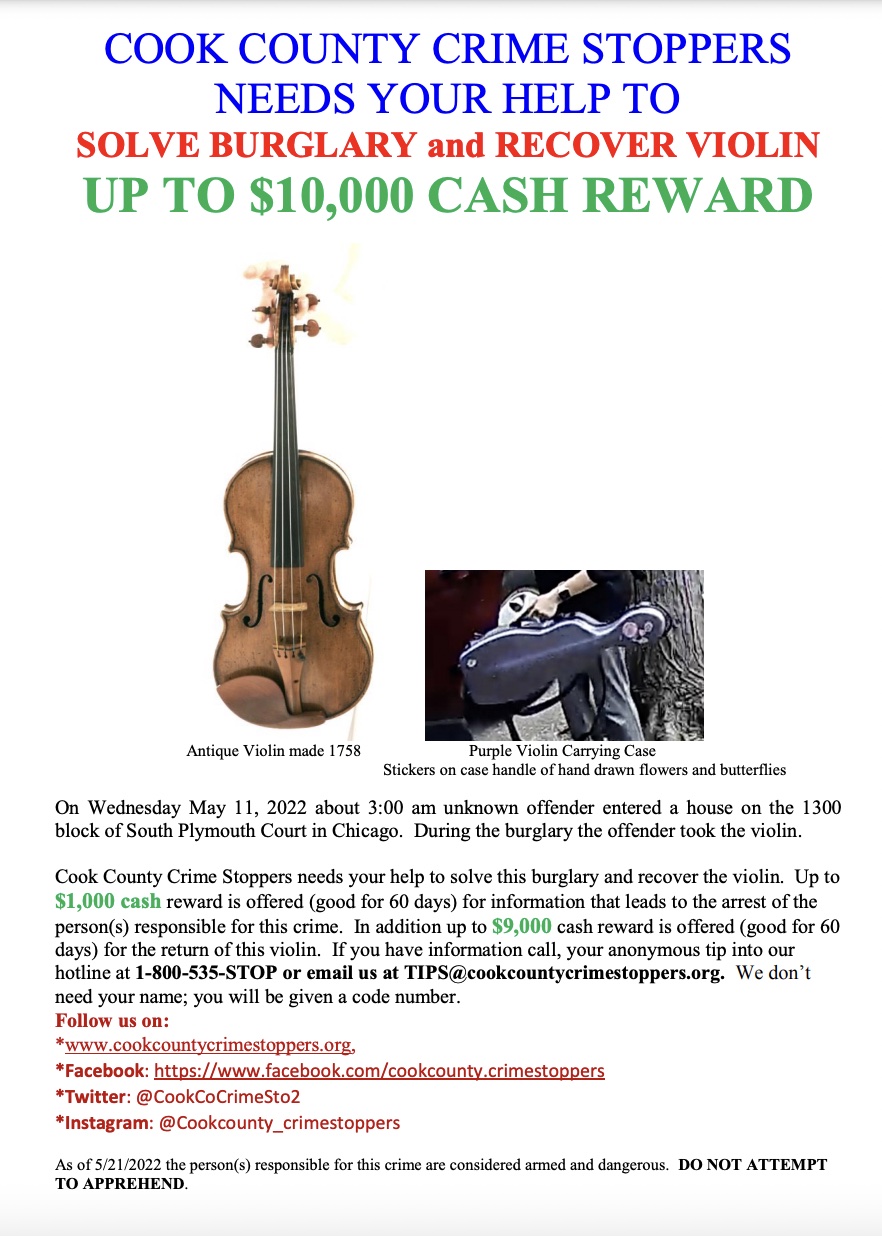 So sad, and it seems, so preventable.

The first thing one should do after receiving a violin like that is purchase a safe in which to keep it.

At the same time, she may have had one and didn't put the violin away for the night.

May 15, 2022 at 10:21 PM · Honestly, I don't know any working musicians who keep their violins in a safe, not even people with Strads and del Gesus, which are even more valuable than Gaglianos.

May 16, 2022 at 02:00 PM · Please do not blame the victim of this crime. Min Kim's memoir "Gone: A Girl, a Violin, a Life Unstrung" is a moving, heart-rending story of a gifted young violinist whose Strad was stolen at the height of her promising career. It gives us insight into what such a loss can do to the victim, including the pain of being accused of not taking proper steps to avoid the theft. Kim lost so much more than a violin and describes that loss in excruciating detail. These precious instruments are part of a musicians very being. We wouldn’t expect Xu to lock her heart in a safe. I encourage you to read Min Kim's memoir to understand the victim's side of the story.

I cannot imagine a working violinist with a great violin keeping it in a safe either.

It is a sad situation, and hopefully, the violin will be recovered.

But, it seems so disproportionate to me to have something so valuable, both personally and financially, and not lock it up at night. And, I'm thinking of anyone's violin having that kind of value. Would one leave that amount of cash out and not lock it up? Yet, a violin has even greater value to a violinist.

A Liberty safe that could easily fit into a closet that's an ideal size to hold a violin and case costs less than $1K used and less than $2K new. A safe in this category also provides 90 minutes of fire protection. Plus, there's plenty of room left for other valuables.

And, that's not just for locking the violin up at night. What about traveling when nobody's at home? Jeepers! My violin has some value, though not nearly in the category of the violins we've been referencing. I couldn't wait to find an appropriately sized safe. Though I might hide it away somewhere as best I could, it was nerve wracking traveling until we found a safe.

May 18, 2022 at 03:23 AM · This is outrageous. I am from the UK, so I don't know what the procedures are in the US vis-à-vis robbery of this kind, however, will the high profile of at least one violin prevent the disgusting thieves from selling it? Or is there a black market? Hoping the cops nab these guys!

Yes, the violin is extremely valuable and yes, most professionals are performing on instruments that are worth somewhere between a nice new car and a nice new house. I don’t know anybody who locks their instrument up in a safe, including me.

I don’t actually have anywhere in my house that would be a good place for a safe, anyway, since one of the side effects of investing money in instruments is less money to invest in a good-sized house.

Editing to say that on second thought, it’s probably not wise to be asking people to publicize how much their instrument is worth and whether it’s in a safe.

Nobody's blaming the victim here, at least not myself. I've been careful to avoid that. Clearly, the victim in this case was well within the bounds of common practice.

I'm merely pointing out the advantage of having a safe, if one has a valuable violin. What's not logical about that?

Just because an idea is new, and isn't currently in common practice, doesn't mean it can't have value. Right?