May 13, 2022, 4:10 PM · If you are a composer and your music happens to win the heart of Anne Akiko Meyers - watch out. She's probably going to make you write something for violin! 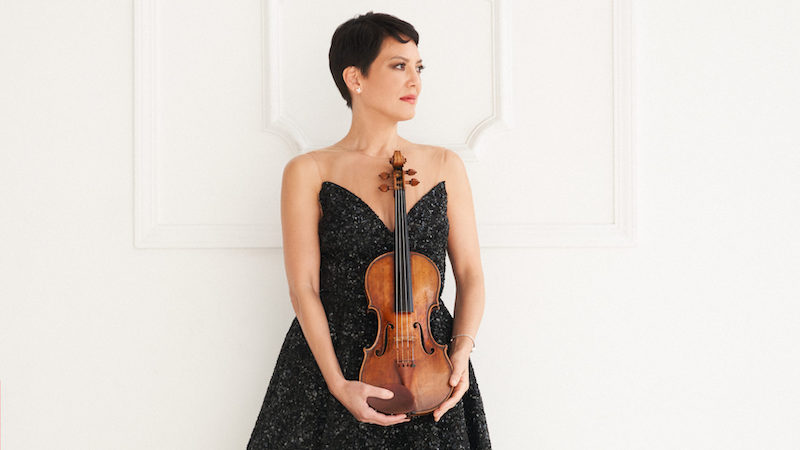 That's how it went with composer Morton Lauridsen, who found himself arranging his choral works "Sure On This Shining Night" and "Dirait-On" into violin-piano duets for Meyers, who features them in her newest album, Shining Night.

"I pestered (Lauridsen) a great deal when I heard O Magnum Mysterium," Meyers told me in an interview last month. That was in about 2013, when she heard the piece - which is written for a cappella choir - on Youtube. "I hit repeat over and over. I was crying, listening to this magnificent music," she said. "Then I just reached out to him. I wrote to his e-mail address at the University of Southern California, where he has taught for many years - and I asked him, would he have any interest in writing something for the violin?'"

He actually did not, at first. He told her he was simply too busy with commissions. But she did not give up. Instead, she started inviting him to her concerts. Finally, he came to see her play Vivaldi's "Four Seasons" with the Pasadena Symphony, and her performance won him over. He agreed to arrange "O Magnum Mysterium" for violin (which she featured on her 2018 album Mirror in Mirror, "and that is what started our long collaboration."

As her long history of premieres and commissions shows, the Los Angeles-based violinist is tenacious about connecting with composers to create new works and arrangements for the violin, and her new album and upcoming performances show that.

Besides the arrangements by Lauridsen,"Shining Night" also includes an arrangement of Corelli's "La Folia" that she commissioned from guitarist/arranger Andy Poxon. Violin students will likely recognize this piece from Suzuki Book 6, but this version, which Meyers performs with guitarist Jason Vieaux, veers off in interesting directions.

First, of course, is the fact that it's played with guitar, not piano or harpsichord. "I love the incredible intimacy that the guitar brings to the violin," Meyers said. "Little did I know that Paganini traveled not only with his gorgeous del Gesus, but with a guitar! It was his constant companion. When you think of the evolution of music, the guitar was always with us."

"La Folia" is a set of variations on a musical theme -- a musical theme that has been around for centuries. "The tune is so hummable and so popular," Meyers said. "It influenced composers from Vivaldi to Brahms to Rachmaninoff - everyone was seduced by this melody. I wanted to open this album with the feeling of the 'earliest piece,' but also the 'morning piece.' To me, this is the morning coffee piece - time to wake up! 'La Folia' literally means 'madness,' so it's morning madness, Monday madness." In this particular arrangement, "you can hear strains of Piazzolla, and there are snippets of diverse styles. I like the range and the cushion it creates."

It's almost a prelude to the rest of the album, which also features Astor Piazzolla's "Histoire du Tango," which Meyers said "is very much the anchor of the album - with the Piazzolla, you're getting the evolution of a century of the tango, all in 20 minutes. It's not an easy feat!"

"It comes in four movements, which each parallel the time that the tango was written -- or the seductive smoke that it exuded those decades!" she said. "Each movement has a different title, the 'Bordel' is 1900s- he goes back to this raucous, joyous, raunchy kind of time, with sailors and 'women of the night' - that feeling of smoky bars and seedy places - and finding the music in that. Then he visits a 'Cafe' in 1930 -- the second movement is so haunting, tender and beautiful, and so wistful. Then he visits a 'Night Club' of 1960, and that is a more straightaway take on the tango. The last movement, 'Concert d'aujourd'hui' ('Modern-Day Concert') is this very Stravinsky, Bartok-ian interplay between the guitar and myself, at a punchy tempo. As the performer, you are just careening off the edges, until the end - praying that you'll make it out alive - jumping off the cliff together, holding hands!" She laughs.

Another significant work on the album is the world premiere of "Laude al Árbol Gigante" ("Laude to the Giant Sequoia Tree’") by Cuban composer Leo Brouwer, another work that Meyers commissioned.

"Leo Brouwer has written mainly for the guitar, so I wanted to see what kind of idea he would have for violin and guitar," Meyers said of the new piece, which is an ode to the beauty and magnificence of California's giant sequoia trees. "This is a very atmospheric piece, and it reminded me of (composer Toru) Takemitsu, in that there's almost an instruction manual that goes with every bar. Very detailed, precise comments about dynamics, tempi, little vibrato, more vibrato, teeny bit vibrato - almost a scientific thesis on how it should be played. So to find freedom within those confines was a challenge - a welcome challenge!"

Her new album aside, Meyers' upcoming live concert schedule also puts a spotlight on the work of living composers, highlighting two new major violin concertos, both written for her.

One is "Fandango," the new violin concerto by Mexican composer Arturo Márquez that Meyers premiered last summer. She will be taking the piece on tour with the Los Angeles Philharmonic, starting with performances in October at Walt Disney Concert Hall, then going to New York to perform at Carnegie Hall.

Right after that, Meyers will perform the world premiere of an entirely new violin concerto, this one inspired by Amelia Earhart. The new work is called "Blue Electra," by Michael Daugherty, and she will perform it in November with the National Symphony Orchestra at The Kennedy Center.

So when and how can other violinists get their hands on these many works that Anne has helped bring to life?