April 25, 2022, 6:13 PM · If you haven't yet heard of Franco-Serbian violinist Nemanja Radulovic - it's not because he is unknown to the classical music world. Born in Serbia in 1985 and now a French citizen, Radulovic has performed as a soloist with dozens of orchestras across Europe, Asia and Australia. He has made numerous recordings, including seven with Deutsche Grammophon. (This one is especially cool - he plays not only the Tchaikovsky Violin concerto, but also the famous Rococo Variations, on viola!)

But somehow Radulovic has performed only rarely in the United States. Happily, I had the opportunity to see his U.S. symphonic debut on Saturday, attending the first of two performances of the Tchaikovsky Violin Concerto with the Los Angeles Chamber Orchestra, with Jaime Martín conducting. 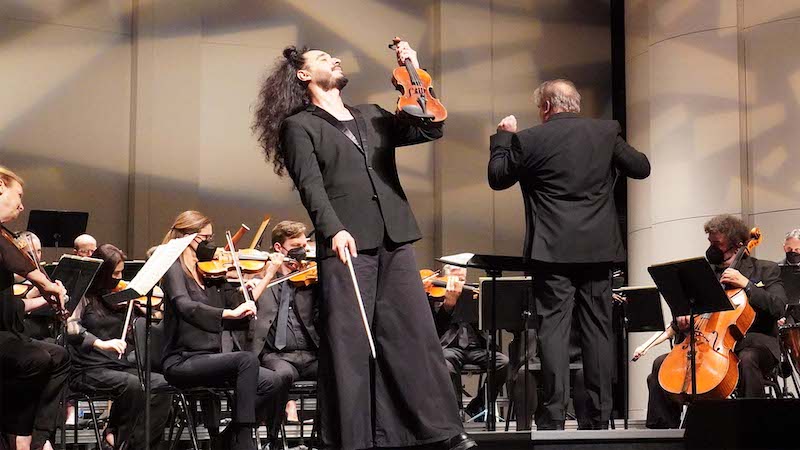 Just walking on the stage, Radulovic appeared larger-than-life: big hair, bell-bottoms and chunky black platforms - and taller than the conductor, even with the conductor on the podium! He had a friendly stage presence that commanded attention - smiling, swaying and embodying the music, whether he was playing or not.

The Tchaikovsky is certainly one of the most-played violin concertos in the repertoire, but Radulovic did not slip into those well-worn grooves that violinists have created in this piece, for which 150 years of performance practice have set the norms. Honestly, a lot of those norms don't make a lot of sense when compared to the written page, and here was a reminder that a little well-placed spontaneity can bring out the charm in this piece, and there are other ways to make meaning in this music.

When the music called for audacity, Radulovic played all-out; but he also could hold the moment, even seeming to stop time. Occasionally he carried things quite far: a slow-down would turn into a full stop, then spring back to life. A quiet passage would be so quiet, it was nearly inaudible. But it all served the music and the moment.

Radulovic had an excellent partner in the attentive musicians of LACO and their also-very-dynamic leader, Martín. In fact, with two such strong and demonstrative stage personalities together on stage, Martín and Radulovic often seemed like they were literally dancing with one another!

Radulovic's performance earned him several standing ovations - one after the first movement, and then another at the end of the piece.

For an encore, Radulovic played the "Sarabande" from J.S. Bach's Partita No. 2 in D minor - a clear and lucid performance, with beautiful-sounding chords and a spell-binding final note. 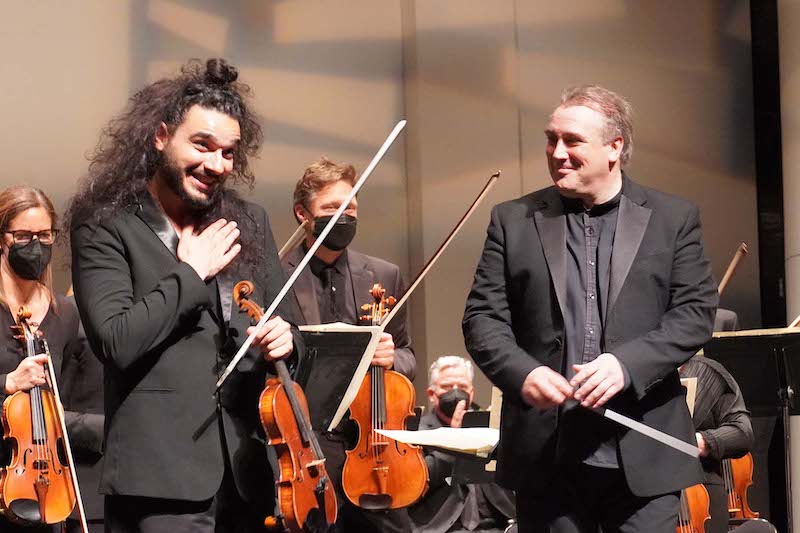 After ample applause, he played another encore - evidently pre-planned, because the orchestra stood up and played with him! The audience laughed happily and clapped along to the super-fast traditional Serbian dance, Pasona kolo, arranged by Yvan Cassar, from his album Journey East.

April 26, 2022 at 12:03 AM · I discovered this violinist several years ago when I found his live recording of Bach's Chaconne on YouTube. He has a unique interpretation of the piece that quickly became one of my favorites!

April 26, 2022 at 12:59 AM · Laurie, Thanks for introducing me to a new violinist! It sounds like an incredible performance. (I'm heading to YouTube now based on Gene's note above.)

That was a new year’s concert and a cross-over program, which I don’t remember in detail.

But I do remember that we looked at him quite skeptical because of how he looked like (“Might he have to compensate poor skills with this self presentation?”), but we were instantly convinced by his violinistic skills and really very kind personality.

Fun fact: At that time, he was using synthetic bow hairs. We were wondering why he was applying new rosin after each little piece, many times per rehearsal, and someone asked him about that. Maybe he is still using such hair. Very interesting person!