April 18, 2022, 4:40 PM · I expected ¡Viva Maestro! - the new documentary by director Ted Braun about conductor Gustavo Dudamel - to be one of those feel-good movies about a very talented musician, an entertaining film that puts his artistry on close display.

But after watching the film, as I put the elements together in my mind, I felt a growing sense of unease. Actually, this documentary tells an absolutely heart-wrenching story.

At first, the film seems like it might be telling a pandemic story: the movie begins with Dudamel in Venezuela, where he is leading the Simon Bolivar Symphony Orchestra in rehearsals for a European tour, featuring Beethoven Symphonies. A narrator mentions that at this point, Dudamel had no idea that this would be his last time in Venezuela for the next three years. Of course, the pandemic brought this kind of circumstance into nearly everyone's life, and so this variety of dramatic statement no longer packs a big punch in a post-pandemic world.

But this wasn't a pandemic story at all, and Dudamel's isolation from his home country came about in a very different way. The timeline begins in 2017, and it ends before the pandemic.

Central to the story of Dudamel is the story of El Sistema, the vast, publicly financed music education system in Venezuela that was founded by José Antonio Abreu and by now has been imitated around the globe. Its purpose goes beyond providing music to children - the idea was to use music for social change; to provide children a refuge from poverty. The seminal 2006 documentary about the program is called Tocar y Luchar - an El Sistema mantra, "to play and to fight."

Dudamel, born in 1981 in Barquisimeto, Venezuela, is arguably the star product of "El Sistema," having honed his considerable conducting skills as Music Director of the Simón Bolívar Youth Symphony Orchestra, El Sistema's top ensemble. He took the post at the age of 18, with Abreu as his mentor. By age 27, he was named music director of the Los Angeles Philharmonic. 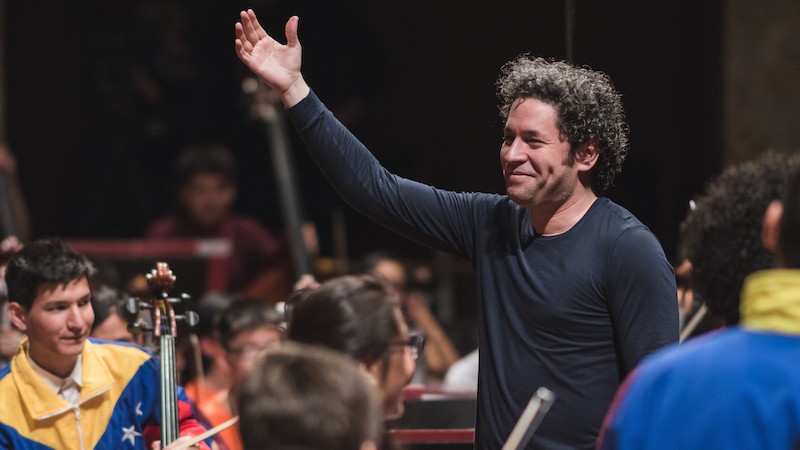 The central conflict in this film is brought on by the political situation in Venezuela, where a constitutional crisis in 2017 ignites protests and deadly violence. In the film, Dudamel expresses his reluctance to get involved in Venezuela's politics. But then one of El Sistema's students - an 18-year-old violist - is killed in the streets during the protests. Following this, Dudamel pens a statement, which is published by the New York Times.

In the film, Dudamel goes from being El Sistema's central figure and organizing force, visiting hundreds of adoring youth and leading its top orchestra in concerts around the world, to being banned from Venezuela as a result of his speaking out. The government cancels two tours that Dudamel was to have taken with the Simón Bolívar orchestra. Then the orchestra almost completely disbands, as its members escape Venezuela's troubles to join orchestras around the world. In the midst of all this tumult, El Sistema's founder and Dudamel's mentor, José Abreu, passes away in March 2018, and Dudamel must grieve from afar.

Along the way, the documentary captures remarkable moments, both poetic and devastating. The rehearsal footage alone would be enough to carry the entire film, without even mentioning the conflict. Dudamel inspires the musicians with both his insights about the music ("make it sound more like champagne, less like moonshine!") and his insistence that the musicians reject "comfort" in their playing, instead finding the tension and excitement to give their everything in performance. He has the musicians of the Simon Bolivar nearly jumping out of their seats with well-directed energy.

Dudamel also speaks eloquently in a series of interviews, filmed during car rides, in green rooms and in his office. "Art, culture, goes beyond entertainment," he said. "It heals the community. It heals the soul of the people."

But reality takes this documentary into other interesting territory. Interviews with Alejandro Carreño, who was at the time the concertmaster of the Simon Bolivar Symphony Orchestra, shed light on the pain of leaving the orchestra during this difficult time. As the situation worsens in Venezuela, Carreño decides to move his family to Berlin and play in orchestras there. He observes that his music-making had always been among his "brothers" - the musicians of El Sistema who had grown up together and ascended to the top orchestra together. To go from such a tight-woven community to an orchestra full of strangers - it was a new feeling.

One unforgettable scene illustrates the difficulty for Dudamel in keeping his connection to Venezuela during this time, while living his life in Los Angeles. It also involves something that was rare in 2017 but completely ubiquitous now: Dudamel directs a rehearsal via Zoom (or something like it). Somehow director Ted Braun managed to get cameras rolling on both ends of the line - with the Simon Bolivar orchestra in Venezuela and with Dudamel in Los Angeles. In Venezuela, a stage full of musicians focuses on two enormous screens placed out in the audience, showing Dudamel's giant face as he watches over the shoulder of a young conductor who is live-conducting the orchestra in his absence. Back in Los Angeles, Dudamel sits at his desk, crouched over the computer, watching intently and occasionally stopping the orchestra to offer suggestions and comments. Suddenly Dudamel's screen goes blank. "Oh no!" he says with dismay, "the battery!" The line is cut.

Without being very explicit about it, this documentary speaks to the idea that while music can build communities, that line can be cut. In the film, Venezuela's political turmoil rips apart the Simon Bolivar orchestra. In the years after the film's time frame, the pandemic puts a halt to orchestral performances all over the world.

But in the midst of so much disruption, the film also shows Dudamel continuing to deliver a message of hope and creating ways to connect and re-connect through music. Cut off from Venezuela, Dudamel, along with composer Arturo Marquez, helps organize a giant pan-American orchestra summit in Mexico for young musicians. And when Abreu dies, Dudamel brings together musicians for a memorial concert outside of Venezuela, in Santiago, Chile.

The name of that earlier El Sistema documentary - "Tocar y Luchar" - used to puzzle me. "To play and to fight" - why "to fight"? You may have to read between the lines to find it, but this new documentary has a lot to say about the "fight." Yes, we have to fight to play. We have to keep the tension and not get comfortable. We have to make our opportunities happen, to create our musical communities and protect them. Certain forces will push toward chaos, dislocation, isolation, and ugly outcomes. Creating beauty and community is actually a struggle, and it's a worthwhile one.

April 19, 2022 at 02:23 AM · If you want a real treat, here's Dudamel conducting the Simon Bolivar Youth Symphony in the Marquez Danzon No. 2. Phenomenal to watch all those beautiful young people swaying together like a huge school of ocean fish.

April 19, 2022 at 02:24 PM · Thank you for this article, Laurie! What an incredible impact Dudamel has made on so many people. It is truly awe-inspiring.

April 19, 2022 at 05:48 PM · I have to say that our local regional orchestra, the Roanoke Symphony Orchestra, is very well led by their conductor, David Stewart Wiley. I have met Wiley several times because our kids had some of the same private music teachers for a while we went to the same summer camp, and it's a camp that parents attend too. Everything about Wiley -- his knowledge of the repertoire, his ability to get a really good sound from mostly freelance performers, his programming choices, are top notch. That's the thing about the music world: You scratch below the top layers (LA Phil, etc.) and what you find in the "second and third tier" are really capable, energetic, motivated people. I conclude there's a lot of bench depth in the world of orchestra conducting.

April 19, 2022 at 06:15 PM · I think another lesson from Dudamel's career is that a star can be born anywhere. He didn't rise to an elite level through the Juilliard pre-college program. He learned his art by studying his scores and then working hard to inspire the musicians of a youth orchestra to play at their highest level.

April 20, 2022 at 08:12 PM · A musician is defined as a person that plays music on a musical instrument. I the course of their duties, a conductor is not a musician but only a "stick waver". The only place a conductor is required is in opera where the orchestra and performers on stage need to be in sync.

April 20, 2022 at 09:48 PM · Well,--- the conductor may have the cheapest instrument in the orchestra, never need to worry about playing a wrong note, but they were all musicians before adding conducting to their skill set. No conductor is better than a bad conductor (mentally one beat behind the orchestra), but a good conductor makes a huge, almost magical difference. Maybe you have not yet worked with a first class conductor.

El Systema was an excellent example of what can happen when talented key leadership is combined with a valid plan, and someone else's money. Now the whole country is impoverished. The right will blame it all on socialism, but Venezuela could have continued well with a European style democratic socialism. Instead it morphed into dictatorship, with the combined economic sins of socialism, inflation, corruption, and incompetence.

April 20, 2022 at 10:37 PM · Well, Victor, I think many of us have a more robust definition of and appreciation for who qualifies a "musician"! A few singers might also disagree with your definition as well. Gustavo is a violinist and also a brilliant conductor, and certainly he qualifies a musician in both roles. What an enormous difference a knowledgeable, insightful, and skilled conductor makes in the music-making!

April 21, 2022 at 09:04 PM · I agree with Laurie. Anyone who doubts the musicianship of a good conductor has never played in an orchestra led by one.

April 21, 2022 at 09:10 PM · Thank you for this insightful review. It’s so easy to think of the greats as Gods who only experience success, adulation, and joy; and to forget that they all live real lives influenced by a mixture of the same challenges, frustrations, setbacks, disappointments, and yes, even tragedies that the rest of us face as we achieve our own successes.