April 8, 2022, 12:51 PM · Welcome to "For the Record," Violinist.com's weekly roundup of new releases of recordings by violinists, violists, cellists and other classical musicians. We hope it helps you keep track of your favorite artists, as well as find some new ones to add to your listening! 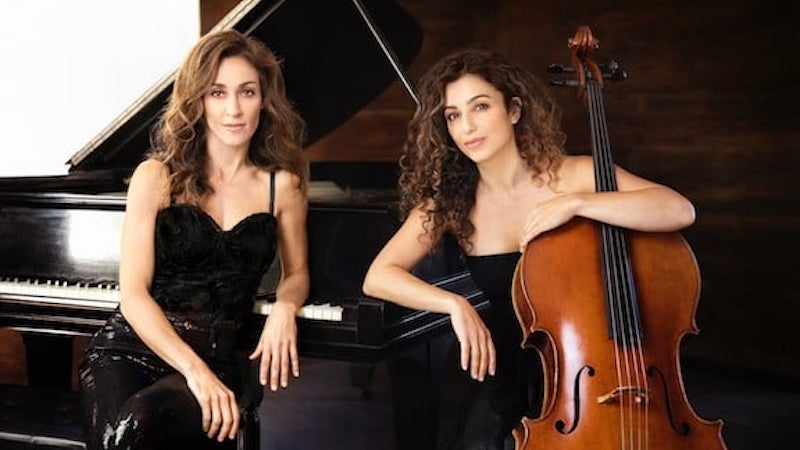 Chicago-based sisters Ani and Marta Aznavoorian celebrate their ancestral homeland in their debut duo album, which features Armenian classical music by composers Komitas Vartabed, Aram Khachaturian, Arno Babajanian, and Avet Terterian; contemporary Armenian composers Serouj Kradjian, Alexander Arutiunian, and Vache Sharafyan; and the world premiere recording of a new piece by Peter Boyer. "The idea for this CD sprung out of gratitude to the proud and soulful people of Armenia and our homage to the historical challenges they have overcome and continue to engage with," said Marta. The new piece by Boyer, 'Mount Ararat,' was composed for the Aznavoorian Duo especially for this project. BELOW: Trailer from the album.

Arnold Schoenberg’s second string quartet – composed in 1907 and included on a previous release by the Gringolts Quartet – is often used as a reference point for the emergence of atonality. It was composed three years after his first quartet, String Quartet in D minor, Op. 7, a work which still has much in common with the Late Romantic idiom of Richard Strauss. Some 20 years later, after Schoenberg had developed his twelve-tone method, he wrote his Third Quartet, which combines his new ideas with a tradition form. BELOW: String Quartet No. 3, Op. 30: III. Intermezzo. Allegro moderato

Having Impromptu performed vast portions of Professor Arnold Schoenberg's Orchestral, Chamber Mus/Chamber Symphony Orchestra Scores, for Professor Schoenberg's Most Advanced UCLA Classes during AS Lectures on ranges of compositional emotions in his complex Atonal works as heard on the Piano,

{and w/Thanks to Laurie Niles, Editor}, most intriguing for their clarity in intonation despite challenges set forth by 'Father of Atonal Composition', Arnold Schoenberg, on this disc portion of Schoenberg's Third String Quartet! That said, it does seem a stretch to equate this Schoenberg work heard here to the 20 year earlier Schoenberg of 20 years later post 1907, as pointed out by Laurie Niles or person writing the short Intro' above.

On Tour of America, in November of 2009, here in Chicago's Symphony Center played beyond glowingly to a S/O Chicago audience w/ Berlin Philharmonic aficionados traveling around the US for the entire Rattle/BP Tour, whom when introduced, one found fascinating with exemplary very musically informed Schoenberg Fan comments on November 16, 2009! The 'holy' artistry of the Berliners exquisite orchestra in Schoenberg did capture the rapt attention of all, after which, the BP then truly switched 'gears', musically, to offer a grand Brahms Second Symphony as none other in the world, being 'at One' with the Berlin Philharmonic's heart of romanticism, and in rare contrast to the brilliant Atonal emotional outbursts in Schoenberg's Chamber Symphony Opus 1, 9 b!!! The Berlin architect seated next to me had remarkable insights into vast differences & similarities of both Schoenberg and Johannes Brahms scores, feeling a strong connection, as myself, after us 'growing up Schoenberg' at our Los Angeles home hearing 'Momma' occasionally utter ideas learned and employed from her mentor, Arnold Schoenberg, whom she explained, had a

great love for Brahms, and known to Music Scholars of Arnold Schoenberg studying his Atonal 20th Century 'explosion' of human emotions from A -Z when initially 1st concert audience encountered in Europe & globally after WWII, with the Arnold Schoenberg's happily ensconced in Brentwood, West LA, on

a {to become much later in 1994, Rockingham Drive home of football legend/later acquitted O.J. Simpson} neighbour. Long gone from this world, Schoenberg's masterworks as of late in this 21st Century, have attracted new & younger generation audiences and performers to study and offer many works of Arnold Schoenberg, plus a new Opera conceived by US *Tod

Machover, which according to the *Composer, emphasizes Schoenberg's Hollywood Years & which the Great Viennese born Schoenberg, turned away from, such was his utter dislike being 'regulated', i.e., by Hollywood Motion Picture Studio 'Big Wigs' to compose in a more 'American' way of recognizable composition for Hollywood produced Motion Picture films! And thank heavens for us, several generations following, to be able to partake of Schoenberg's post WWII Artistry in Composition once in the safety of American values albeit in 'La La Land', & as stated being requested by Heads of Studios to dampen his Atonal Compositional Art!

On a personal note, as learned from my Arnold Schoenberg respected & admired Mother, 'Schoenberg was a very warm person and colleague in his LA Years', married & w/children & present on Sunday's, for Schoenberg Soirée's with many elite composer guests & students invited to intermingle & perform with Sunday Buffet's provided by the gracious hosts, Professor & Mrs. Arnold Schoenberg, introducing my mother, a very shy young woman, to the likes of Igor Stravinsky & famed Bernard Herrmann, of Movie, 'North by Northwest' {to be made a touch later}, Epic Academy Award Film Score!!

My un-naturally shy and deeply kind Mother, spoke about these experiences in her last chapters of Life & to myself, her immensely proud to be first born daughter and musically reverent forever friend ...

Sending congratulations to the Gringolts String Quartet, I am

Yours musically from Chicago on Palm Sunday, April 10, 2022