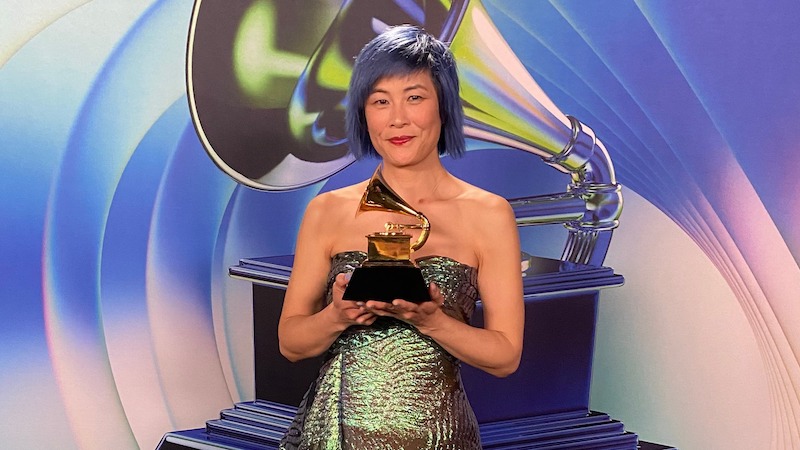 Koh's Alone Together, which won the Grammy for "Best Classical Instrumental Solo," was a project created in response to the coronavirus pandemic and the financial hardship it placed on so many artists and musicians. The album includes a collection of 40 works -- 20 composers, most of whom have salaried positions or other forms of institutional support to carry them through this challenging time, agreed to donate a new, 30-second micro-work for solo violin, while also each recommending a fellow freelance composer to write their own 30-second solo violin work on paid commission from the artist-driven nonprofit ARCO Collaborative.

Cellist Yo-Yo Ma and pianist Emanuel Ax won a Grammy for "Best Chamber Music/Small Ensemble Performance" for their album Beethoven: Cello Sonatas - Hope Amid Tears, which features Beethoven’s five sonatas for cello and piano. This is the sixth Grammy for Ma and Ax, who have been making music together for more than 40 years.

The Philadelphia Orchestra, with conductor Yannick Nézet-Séguin, won a Grammy for "Best Orchestral Performance" for its recording of Florence Price's Symphonies Nos. 1 & 3. "So much important music around the world has been neglected, not because of the quality of the work, but for superficial reasons," Nézet-Séguin said. "It’s so important to me and to The Philadelphia Orchestra to look at these works, bring back the music of composers we believe in, like Florence Price, and continue broadening the repertoire to give a much more diverse representation of who we are as a society today."

If you want to give a shout-out to any of this year's Grammy winners, please do so in the comments. For a complete list of winners, click here.

Sunday's television broadcast was a joyful and diverse show, which exhibited a spirit of respect and solidarity between musicians of many different genres. It was also a celebration of the wonderful fact that we are all back to performing live. Unfortunately it didn't include the performances from the Grammy Premiere Ceremony, where many of the Grammys (including the classical categories) were awarded. Here some performances that I found to be highlights from both:

BELOW: a performance of "There's a Place for Us," (at first segue-ing out of "Send in the Clowns") sung by Ben Platt, Rachel Zegler, Cynthia Erivo, and Leslie Odom Jr, during the "In Memoriam" montage, as tribute to lyricist Stephen Sondheim:

If you want to watch an incredibly joyful performance and catch up a little on popular music, look up Jon Batiste, arguably the star of the night who won five Grammys Sunday night (including Album of the Year), performing "Freedom" live at the ceremony, with the help of his band and two Steinway grand pianos.

April 4, 2022 at 06:49 PM · I found Jennifer Koh's album "Alone Together" to be interesting and compelling. I found it on Spotify. Among other accomplishments the album presents a certain "cross section" of where composition for solo violin stands today. Much of it is aligned with the "Itchy and Scratchy" school of modern music (not to be confused with "Strum und Drang"). I wonder what the same composers would have come up with had they been asked to write for violin and piano, i.e., whether they would have, on average, waxed more lyrical.