V.com weekend vote: Which edition of the Bach Sonatas and Partitas do you prefer?

April 2, 2022, 9:47 PM · Violinists tend to agree that J.S. Bach's Six Sonatas and Partitas for Solo violin hold a special place in the literature.

If sent to a desert island (or quarantined in a hotel room) with just my fiddle and one book of music, I'd probably insist on bringing along my Bach S&P's. But which edition would I bring? 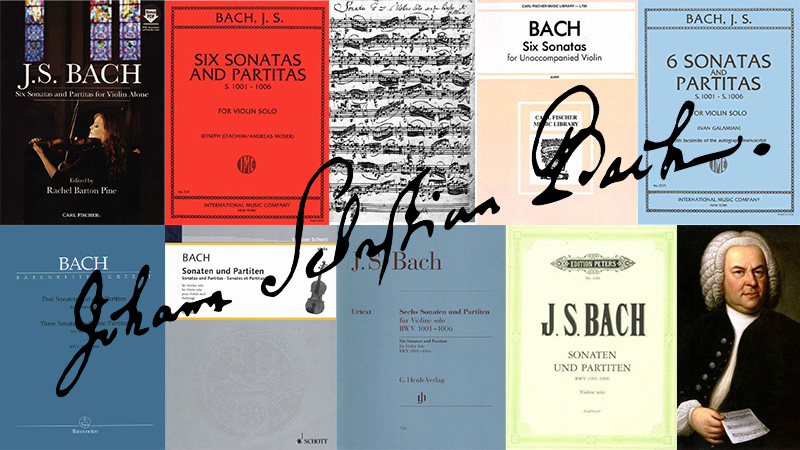 I have been thinking about the various editions of the Bach S&P's since reading a V.com discussion thread this week that asked for advice on which edition to purchase. Quite a few editions have popped up in the 300 years since Bach wrote these pieces - and here we sit in the 21st century, with most of them at our fingertips.

Over the years, I've acquired four editions: Szeryng, Galamian, Joachim/Moser and Barenreiter. When it comes to my desert-island dilemma, I might want the Szerying for the fingerings, the Galamian for the manuscript in the back, the Joachim/Moser for the double-line read-along; the Barenreiter for the clean-copy urtext. Then again, I might just purchase Rachel Barton Pine's edition and take that, along with my Baroque bow!

For this weekend vote, I'm asking you to decide which edition you would bring, and I'm not giving you the option to take a giant iPad, loaded with every edition under the sun (but what a great idea, eh?) You only get to pick one!

Which edition is the one you currently prefer, and for what reason? Do you have others? And what do you like or dislike about them? If you simply have one edition, then vote for the edition that you have!

April 3, 2022 at 03:28 PM · I have the Schirmer edition which is by Herrmann. Since my teacher changes so many fingerings and bowings in my music, it doesn't really matter what edition I use. I've had the Herrmann edition since childhood.

April 3, 2022 at 10:41 PM · I use the Barenreiter ed., it has plenty of room to write in bowings and fingerings, which I change whenever I revisit a section after an absence. I was not aware of the Szeryng version. It gets so many votes that I should check it out.

I also have an odd edition, probably out of print, by Sol Babitz. He was an early (1960s?) advocate of what is now informed historically correct performance. He starts with the first published edition of the S&P set, and adds his opinion on bowings, unequal notes, etc. I disagree with most of them, but it does open the door to a more free, personal "interpretation"(don't like that word)

April 4, 2022 at 07:38 AM · Same as Paul. My childhood teacher told me to buy the Schirmer edition of everything and then he marked it all up himself. It has never interested me that much to compare editions so I haven’t bought others, but I have changed fingerings and bowings with different teachers as I have studied the pieces in later life.

April 4, 2022 at 11:28 PM · I voted "the manuscript" because a photocopy of the handwritten manuscript is what I currently use working with the Chaconne.

Now that one can be hard to read, but when you have worked with the Chaconne for years you know the notes pretty well, and that puts reading the handwritten manuscript into a total new level.

I encountered Bach's S&P's for the first time as a teenager when my teacher presented them to me. So I bought the sheet music. The edition is Jan Hambourger, Oxford University Press. I have used that for years whether playing violin or viola, in that I saw no reason to buy a viola edition, I just play from the violin edition transposed a fifth down.

At some point a friend of mine gave me his copy which happened to be the Carl Flesch (Peters) edition. At some other point I bought a little book with a copy of the the handwritten manuscript, it is downsized into this little booklet, good for study but very small to play from. .

So those are the editions I have.

Lately I have I found a PDF file with the handwritten manuscript on IMSLP, A4 size. I downloaded it and printed out the Chaconne.

Now in the Hambourger edition the Chaconne is 12 pages, in the Flesch edition 14 pages. The manuscript is very dense written, it is only 4 pages plus 3 staff systems. With the help of scissors and some glue I rearranged it so it is 4 pages. Those 4 pages I glued on a piece of cardboard. So now I can enjoy playing from the manuscript without page turning problems.

I don't recommend playing from the manuscript first time you encounter this music. I think it is much better to work with a printed version. But at some point it is really fantastic to take a view on the manuscript.

April 5, 2022 at 11:25 PM · I have the old Dover urtext, a Peters edition (but not Flesch; mine's by Max Rostal), and Rachel Barton Pine's. I'm of course only looking at the easiest of the movements and while I like Pine's ideas and practicality, Rostal's position changes make a lot of sense, especially in terms of intonation. I don't know if I've seen anyone mention the Rostal on this forum.

April 6, 2022 at 08:50 PM · I have the International (which I use in preference to my other inherited editions at the moment, because unlike the Peters Hellmesberger, the paper isn't in danger of disintegrating at the earliest opportunity, and there are less page turns than with the Peters Flesch); but it's nothing to do with the great Galamian, it's another Hellmesberger, but displaying only one of the two choices that his Peters Edition gives for the "figure of 8" passages in the E-major Prelude (I suspect this editorial decision may be correct, and that Hellmesberger might have lifted the alternative found in the Peters Edition from the BWV29 Cantata).

I must admit that like Laurie, I might be tempted to buy the RBP edition for the purpose.

I think this question of what edition to use of the S&Ps pales into insignificance, compared with the matter of which edition of the 'CELLO suites to use! (particularly for viola - Martin Jarvis, who made better use of my teacher than I did, is worth reading up on this - but also, I suspect, for the 'cello) - But if we were going to have a weekend vote on this, it would have to be an adjunct to a main weekend vote, because the electorate would be only a subset of us.

April 9, 2022 at 03:27 AM · For what it's worth, the IMSLP provides a fair few public domain editions _and_ copies of the manuscript, for not only the Sonatas and Partitas, but also the Cello Suites, including a Creative Commons edition by Werner Icking, which gives cellists and violists the chance to try their hand at the BWV 1001-1006 and violinists and violists the same with the BWV 1007-1012. They seem to be quite good. I'd probably add the Consolini viola edition if I was taking my viola; the Serge Blanc/George Enescu one if I was taking my violin.