March 27, 2022, 6:51 PM · Violinist Kelly Hall-Tompkins may be best known as a concert artist, as well as the "Fiddler" in more than 400 performances of Broadway's "Fiddler on the Roof," but behind the scenes she has been bringing classical music to homeless shelters in New York City and Los Angeles for more than 15 years, through an organization she founded called Music Kitchen – Food for the Soul.

On Thursday, a concert at Carnegie Hall will feature a song cycle called "Forgotten Voices," based on feedback comments by homeless shelter clients from the first 100 concerts given by Music Kitchen. Music for the songs was written by some of the top composers in the classical world, including Courtney Bryan, Jon Grier, Gabriel Kahane, James Lee III, Beata Moon, Paul Moravec, Angélica Negrón, Kevin Puts, Steve Sandberg, Kamala Sankaram, Jeff Scott, Carlos Simon, Errollyn Wallen and Ellen Taaffe Zwilich and Kelly Hall-Tompkins herself. 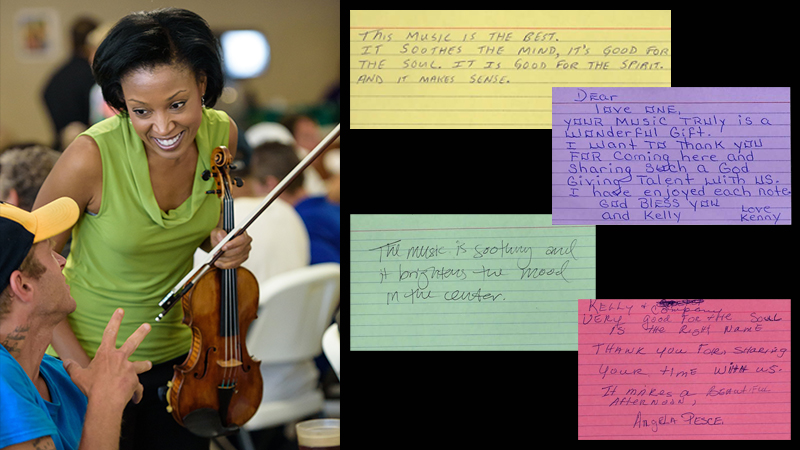 I spoke to Kelly about the project in a phone interview before the pandemic -- when the entire song cycle was originally planned for a May 2020 premiere at Carnegie Hall.

The idea for Music Kitchen started developing nearly 20 years ago, when Kelly was helping her husband, who was coordinating volunteer cooks at the food and shelter program at their church, Holy Trinity Lutheran Church in Manhattan. At first it was strictly about volunteering at church, "we wanted to be part of doing something constructive," Kelly said.

Then one day she was trying organize a practice performance for an upcoming concert. As the date of her performance grew closer, Kelly realized that she was not going to be able to coordinate a practice run-through with friends. So she decided to simply play the concerto, unaccompanied, for the people at the church shelter.

The power of their reaction surprised her. "They were so moved by the music, they asked me to come back and play the next night," Kelly said. "I said, 'I will, but I'm going to play the same violin concerto with no accompaniment....' and they said, 'That's fine, we want it. We want to hear you again.'"

So she did it, and "immediately the wheels started turning," she said. "I realized that this is something that I should offer regularly." She wanted to provide a true artistic offering, connecting and speaking with the audience. "Making a connection with the audience is a hallmark of the program." She also wanted to perform chamber music, as opposed to solo music or orchestral music. "I feel that chamber music is the music of community, and it's very powerful. In the right hands, it has the power to really grab people. I see what happens to people and I'm just blown away."

The first official "Music Kitchen" performance with her quartet was a memorable one - and not just for the music.

"As it turned out, the volunteer cook didn't show up that night -- something which occasionally happened," Kelly said. "We had just rehearsed the Brahms A minor Quartet, and we were expecting to come down and just play. But we came down to a room where there was no scent of food!" (she laughed)

"In those emergencies, usually the volunteer coordinator would make a call to order pizza, to make sure that a meal would be served," she said, "but the other violinist for that concert, Asmira (Woodward-Page), said, 'We can't have them eat pizza, we have to cook!' And I thought, 'Are you kidding me? They're supposed to be here in 10 minutes!' But she insisted, 'We have to do it!'"

"So somehow she rallied us to this impossible task," Kelly said. "We went to the kitchen and everything was frozen! But we somehow managed to improvise a pasta sauce. Mercifully, the shelter clients were running late with their organized bus transportation to the program. And so we served the meal, and then we played our Brahms quartet."

While Kelly has played in concert halls all over the world, she has found that at the shelter, the emotional connection with the music is palpable.

For example, one time she was playing the Brahms A minor quartet at the shelter, and "within seven bars, the audience in the front row was leaning forward," she said. "They were looking back and forth between us, to follow every single line. Within seven or eight bars, they were cheering the rise and fall of the phrases. And within half a page, another listener broke into tears. I feel so deeply about that music by Brahms, and here we were, playing for an audience of people in a homeless shelter who were just as moved by it as we were. It ultimately changed our performance."

While some people may attend classical music concerts for social reasons, the reactions that Kelly gets from the homeless shelter clients are 100 percent about the music and the performance. "You know that it's really hitting the mark, and that will make you want to come back again and again," she said. "These are people who are in a particularly receptive, emotional and vulnerable state. They just get it, right away."

Kelly formally founded Music Kitchen in 2015, with a mission "to bring top professional musicians together to share the inspirational, therapeutic, and uplifting power of music with those experiencing homelessness," Kelly said. "I believe a shelter exists to provide not only physical but emotional and spiritual support to those who, for whatever reason, have lost the foundation of their homes and communities." Since then, Music Kitchen has served more than 30,000 clients at 10 shelters in New York City and Los Angeles.

After each concert, Kelly collected the thoughts and reactions of homeless shelter clients, who wrote them down on colored cards. When she started reading them, she was profoundly moved. "Homelessness does not have a single voice. It doesn't have a single style, and it doesn't have a single look," she said. "It's been really fascinating to me to see what calls people." A few excerpts from those comments:

"I have collected hundreds of these comments," Kelly said, "and that is what gave me the idea to create 'Forgotten Voices,' to celebrate and elevate their voices."

With support from Carnegie Hall, Music Kitchen commissioned the composers to create songs based on these words. Each song in the cycle received its world premiere in a shelter, starting in 2018 and premiering one a month.

For Kelly, the many concerts she has played for Music Kitchen has been "a real commitment to the idea that classical music is for everyone," she said. "It shows me, every single time, how deeply that is true."