March 22, 2022, 11:39 PM · What an incredible week it was for watching star violinists at Walt Disney Concert Hall in Los Angeles - on Wednesday Midori performed a recital with pianist Özgür Aydin, then over the weekend Hilary Hahn gave three performances of Samuel Barber's Violin Concerto with the Los Angeles Philharmonic and conductor Paavo Järvi. 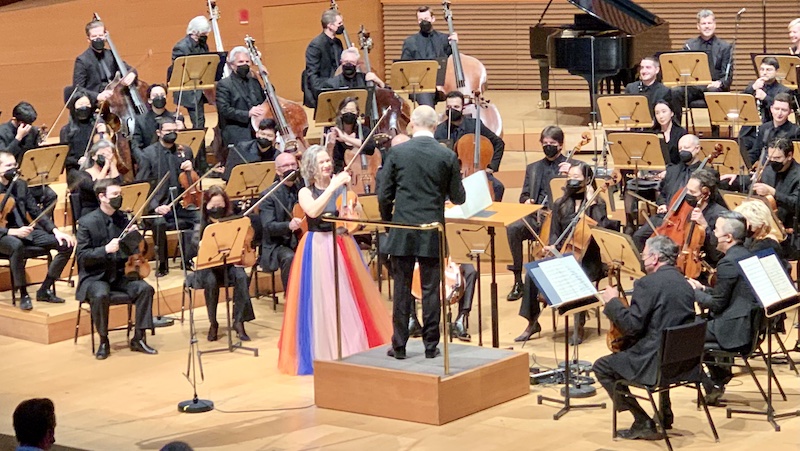 I could not go to both concerts - but the reason was a positive one: the live classical concert scene has been flourishing in the Los Angeles area this month, giving free-lance musicians like a me a chance to play a lot more frequently. So I'd been playing in the Pasadena Symphony all week. But after our two performances on Saturday, my PSO colleague Pam Gates and I agreed: we HAD to go see Hilary Hahn. Thank goodness there was a Sunday afternoon performance!

On Sunday, we joined the throng of people who came to see Hahn play with the LA Phil. It felt so "normal" - yet the pandemic remained a persistent presence, in ways both logistical and psychological. Before the concert, the 1000+ concertgoers formed a long, snaking line outdoors in the wind and brilliant sunshine - an unusual occurrence that felt more like a line at Disneyland than at Disney Hall. Once at the door, we each showed our vaccination records and received a wrist band to gain entry.

Inside, everyone wore a mask, including orchestra members, with Hahn and conductor Järvi being the exception, their masks off only when they performed. In general, confusion and ambivalence seem to reign, when it comes to the masks, and it varies from region to region and venue to venue. Masks are no longer required by the state of California, and they were optional for both musicians and audience at our Pasadena Symphony concerts the day before. Undoubtedly, it will take time to reach a comfortable consensus on this.

But back to Hilary Hahn - what a treat, to see her after so long, following both her sabbatical and the pandemic. She certainly delivered a rock-star performance, and when I say rock star - I mean her playing was solid as a rock, and her star power shone bright while also generating a kind of gravitational force that draws rapt attention.

The Barber Violin Concerto starts with two gorgeous, slow-ish movements, then ends in a rollicking thunderstorm of triplets for the soloist in the third movement.

The beginning provides no orchestral introduction; the soloist simply enters simultaneously with the orchestra. Hahn's sound had a rich core to it, right from the opening, and every long line unfolded without a crack in that wave of melody.

The second movement is arguably the living soul of this piece, and so it did break the spell somewhat when the start of it was delayed due to the persistent ringing of a cell phone in the audience. But Järvi patiently waited it out and Hahn took it with a smile -- these things happen in our modern world.

When the second movement did start, it was gorgeous from the first orchestral chord and beautiful oboe solo. Hahn's entrance was spacious and unhurried. This movement eventually builds into a series of waves, each greater than the last, and let's just say that Hahn and the LA Phil know how to make waves -- it was downright exciting.

The fast and tricky last movement, written by Barber to satisfy a soloist that complained that the first two movements weren't sufficiently difficult, was a wonderful thrill ride, punctuated by Hahn's fast and extra-bouncy spiccato and supported by the LA Phil's rhythmic precision. It sounds like a fun-house buggy moving at Ferrari speed, careening around sharp curves and hurtling over wild terrain. Scary and exciting - then at the very end she pushed the accelerator even harder!

Responding to four standing ovations, Hahn next played an encore, choosing not one of the 27 encores written especially for her, but solo Bach: the "Sarabande" from Partita No. 2 in D minor. During the pandemic's worst days of isolation, marooned violinists all over the globe turned to this music, Bach's Six Sonatas and Partitas, the most complete music that a violinist can play without others. "Sei Solo" Bach called them - "Six Solos," but also, "You are alone."

Hahn was playing solo, but no longer alone, with a couple thousand of us in our seats and the orchestra musicians behind her, all of us breathing into our masks as we listened. No need to identify a Baroque or modern bent to her Bach, it was simply beautiful and timeless, pouring forth until the spellbinding end, when the relentless march of time seemed to slow down just a little bit.

March 24, 2022 at 10:06 AM · A wonderful review of an undoubtedly wonderful performance. I don't know much about Samuel Barber's Violin Concerto, except for the second movement. I grew up listening to the second movement on the UK radio station ClassicFM, though I had no idea it was by Barber. Often, when watching Hahn's performances, I find the Bach encores to be a key highlight.