Interview with Violinist Hilary Hahn: Back on Stage with the LA Phil

March 18, 2022, 2:36 PM · Violinist Hilary Hahn is more than happy to be returning to the concert stage this spring, with performances of the Barber Violin Concerto this weekend with the Los Angeles Philharmonic and Paavo Järvi; followed by a recital on April 1 in Chicago, where she is Artist-in-Residence with the Chicago Symphony Orchestra. 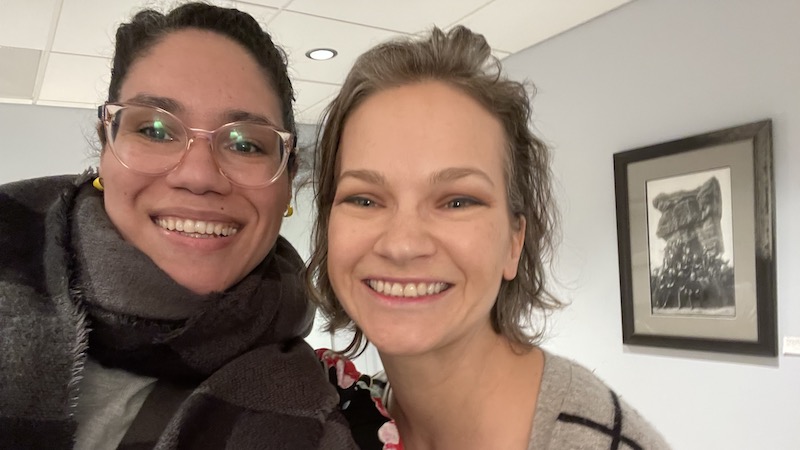 Violinist Hilary Hahn with Composer Jessie Montgomery. This year Hilary is the Chicago Symphony's Artist-in-Residence while Jessie is the CSO's Composer-in-Residence.

"Getting back to performing has been really important; it's very powerful for me," Hilary told me in an interview Wednesday, just before her first rehearsal for this weekend's concerts with the LA Phil. "When I was able to start concertizing again, I felt an even clearer direction and clearer sense of musical self. I felt like I had found myself again - but in a different way."

Before the pandemic, Hahn had taken an intentional year-long sabbatical, but when she emerged from that in September 2020, the entire world had gone on hold. Many of the performances she had planned for her return were delayed or canceled due to COVID.

"Pretty much my entire last season was cancelled, for one reason or another," Hilary said. These days, when concerts are cancelled due to COVID or other situations beyond her control, she just changes direction, filling the time with something work-related and productive. For example, catching up on recording pieces that she'd always wanted to record. "Or if there's a project I'm working on, I try to use the time move that project forward, behind the scenes. I try to keep the feeling of momentum.

In fact, just last month she was to have played the Barber Violin Concerto in Japan, with Paavo Järvi conducting Tokyo's NHK Symphony Orchestra, but it was cancelled due to COVID concerns.

"I don't assume something is going to happen any more, but I try to prepare for it," Hilary said. "That's my middle ground: I'm happy if it happens, and I'm ready for it. If it doesn't happen, I'm not crushed."

Pandemic-era unpredictability has changed the large-picture way that she has traditionally navigated a concert season as a soloist.

For example, "a lot of the pieces I scheduled for this season were scheduled with the knowledge that they would be very much in my hands, after playing them frequently last season," Hilary said. "Now, in this particular six-week period, I have a ton of repertoire that I'm bringing up relatively fresh, all at once, and it's all big repertoire. That sort of layering of newer preparation and older familiarity is just not there. Things are building to the same place at the same time, and that's a little much to get my head around. I know how to do that, it's just a different approach."

For example, the Barber that she will play this weekend with the LA Phil: "I would have performed it in Japan last month," Hilary said. "No matter how much I practice it, it's not the same as having played it, rehearsed it, and performed it on stage, and been working on it the whole time."

Speaking of the Barber, it's a piece that Hilary has known for a long time, having performed it first when she was 19 years old.

"The concerto itself is pretty counter-intuitive - you listen to the recording of it when you are a student and you think, 'Nice, beautiful lyrical piece!' and then 'Oh, hard third movement,'" Hilary said. The surprise is - somehow that those first two movements serve up as much challenge as the last.

The multi-talented Samuel Barber - who was a composer, pianist, vocalist, conductor and organist - was nonetheless not a violinist. His writing includes the very long slurs typical of piano phrasing, not necessarily taking violin technique into account. It also includes the kinds of sustained notes and chords that one might expect from an organ - but from the orchestra.

"If you think about the massive, expansive aspect of the piece, he's really maximizing the ability of strings to sustain," Hilary said. "And then he taps into the agility of a solo violin, for the final movement. What's hard about the first two movements is just sustaining the long line, as a soloist, without over-hyping it. It has to sound lush, but yet there is only so much volume the solo violin can produce with those long notes, so it has to flow. Then when it takes off it has to really take off - the transitions have to go quickly so it can arrive back in a sustained feeling that's a fresh feeling."

And that last movement - "you have to be prepared for everything!" Hilary said. The movement is full of fast triplets, tricky patterns and rhythmic double-takes, and it can trip up the best of orchestras, conductors and soloists. "It's just very hard to keep track of everything and hear everything. You have to really know where the orchestra plays, and you need to be able to play your triplets clearly because there are a lot of aural allusions in that movement that can throw off everyone who is on the stage with you. There are chords, the chords ring, you can't hear every note of the solo part. Things get lost for everyone who's listening on stage, and then they pick up on something, but it may not be the beat that they're picking up on, it might be the melodic pattern. So it's important to be ready to give some extra cues and do some extra accents."

"The most unusual performance I've done of this third movement was with the Baltimore Symphony, for the opening of the Baltimore Ravens stadium, a number of years ago," Hilary said. "The stadium wasn't done yet, but opening day had arrived. So they held the grand opening in the parking lot, under some highway underpasses for about 6,000 people. We were on an open sound stage with no shell - and we just couldn't hear. So everyone was watching the conductor like a hawk -- and it was so together! It was very memorable. It just shows, you just all have to be working off the same rhythm, and then it's fine."

How has her perspective on the Barber changed, since she first started playing it as a teenager?

One difference is to have the longtime collaborative relationship that she does with conductor Paavo Järvi.

"When I was 19, I had different kinds of collaboration," Hilary said. "Often, there was more of a mentor relationship with the conductor, which is very valuable. It was a phase of career or phase of life -- it's not like I was working with a 19-year-old conductor! Back then, even the young conductors were a generation up. Now when I work with a so-called young conductor, they're my age or younger, and so there's a lot more generational similarity - we've been working for the same amount of time, we have the same reference points, we understand each other. That in itself is different."

"I've worked so much with Paavo, and I'm so excited to work with him here in Los Angeles," Hilary said. "I've really been looking forward to it. Paavo also went to Curtis, as did Samuel Barber. So the Barber-Curtis connection is strong. I haven't played this piece with him before, but we've played so many things together. We're both into the piece, and so I'm excited to get that going."

Anyone who follows Hilary on her Instagram page knows that she is in the midst of her fifth 100 Days of Practice project - to be specific, she just posted a practice excerpt from Day 76, having started on January 1. Many of her 376,000 followers participate with her, posting their own videos and reactions to hers.

"This time around, I offered a low-key version," Hilary said. The pandemic has been a long slog, and it has left people feeling exhausted. Instead of pushing people into a challenge, Hilary simply wanted to offer people a window on 100 days in the life of a person who practices. She warned that "I probably won't be able to write a lot, but I will be practicing so I'll post. But it's not meant to be a challenge, and it's especially not going to be a set of goals this time. These are 100 days in the life of someone who practices. On some of the days you practice, on some of the days you don't. It's still 100 days that happen."

"What we should be doing is this: when we take a day off, let's make sure we really do take a day off. Let's do it deliberately, let's plan for it, let's make the most of it. Make that a beach day. Or make that a day that you do your chores. Or make that a day when you spend time with people who need you. Make it a valuable day - something that enhances your life, or something that helps you have space to practice well on other days," Hilary said. "That's where I've arrived through my career, and I think I would have benefited from arriving there earlier, as well, because of the enormous taxation on the body that playing an instrument creates. Self-care is important. It was interesting to see the more grown-up work-life balance comments that came from this round of 100 Day of Practice."

March 24, 2022 at 09:35 AM · It's good to hear about another live concert from Hilary Hahn, as well as updates on her 100 Days of Practice challenge. I used this in order to practice foreign languages every single day. This has been strikingly effective. I will be returning to the piano this year, and I want to use the same challenge. What I like about her daily updates is how all of her progress is based on incremental steps. Beforehand, I wanted to achieve so much in a short period of time but seeing little, manageable bursts increased my motivation. Great article!