March 10, 2022, 10:16 PM · Welcome to "For the Record," Violinist.com's weekly roundup of new releases of recordings by violinists, violists, cellists and other classical musicians. We hope it helps you keep track of your favorite artists, as well as find some new ones to add to your listening! 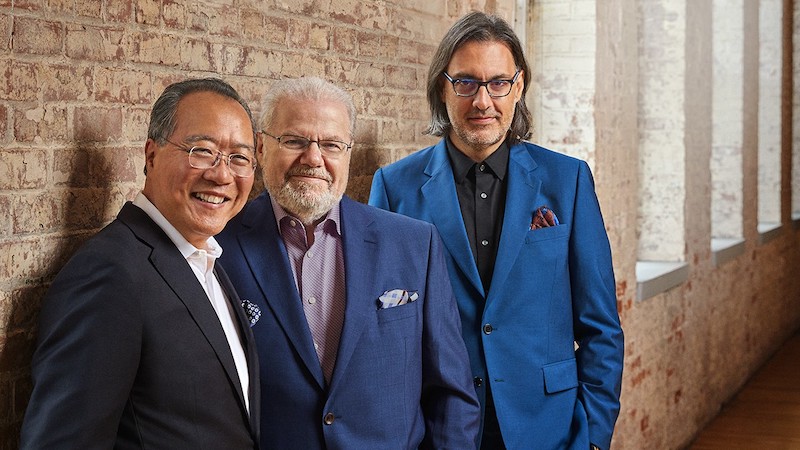 Classical music superstars Emanuel Ax, Leonidas Kavakos, and Yo-Yo Ma perform two of Beethoven'symphonies - the second and the ever-popular fifth - as chamber music, in intimate arrangements for trio. The second symphony was arranged for trio by Beethoven's pupil Ferdinand Ries, and the fifth in a newly-commissioned arrangement by Colin Matthews. "The idea of actually being able to play the beginning of the fifth symphony with your hands is just an incredible thrill," Ax said. "You learn a lot about his kind of combination of controlled mania with an incredible lyricism." Ax, Kavakos, and Ma first played Beethoven's Symphony No. 2 in trio format at the 2021 Tanglewood Music Festival, and this month they are touring the U.S. as a trio. BELOW: Beethoven's Symphony No. 2 in D Major, Op. 36: I. Adagio molto - Allegro con brio:

Winner of the Strings Final of the BBC Young Musician in 2020, Coco Tomita’s debut album "relates to key figures of the 20th century, especially female violinists I hugely respect," Tomita said. Those violinists include Ginette Neveu, the driving force behind Francis Poulenc’s Violin Sonata, and Jelly d’Aranyi – taught by Jeno Hubay, whose "Carmen" is featured on the album and was one of the pieces Tomita played to much acclaim during the BBC Young Musician. Other works include George Enescu's "Ménétrier," Lili Boulanger's "Nocturne," Maurice Ravel's Sonata No. 2 for violin and piano, and Claude Debussy's "Beau soir." BELOW: Trailer for the album:

Mendelssohn may have published only one violin sonata (the early Op.4), but he left others in manuscript, including the F major sonata, which remained unpublished until 1953 when violinist Yehudi Menuhin arranged it for publication. Alina Ibragimova and Cédric Tiberghien perform the 1823 Violin Sonata in F minor; as well the three posthumously published ones in F major (1838); another in F major (1820); and a fragment from a Sonata in D. Ibragimova and Tiberghien's 15-year musical partnership has earned them a number of accolades and awards, including the Annual German Record Critics’ Award (2017) for their recording of Mozart’s complete works for violin and piano; the Diapason d’Or (2019); and the International Classical Music Award (2020) for their interpretation of the music of César Franck.

March 13, 2022 at 12:28 AM · I saw the Ax, Kavakos, Ma trio at the Kennedy Center. They did Beethoven 6 as arranged for piano trio. It did not work for me at all. The texture was all wrong, and the acoustics in the Concert Hall were not good. It all sounded too loud. They also did Beethoven's opus 11; unfortunately, IMHO, it works much better as written with clarinet instead of violin. Their rendition of the Ghost Trio was wonderful.