March 3, 2022, 10:54 PM · Los Angeles Philharmonic Associate Concertmaster Nathan Cole was actually playing the 34th violin of the night, when my ears pricked up - Oooooo, I like that sound! (More about that at the bottom of the story!) 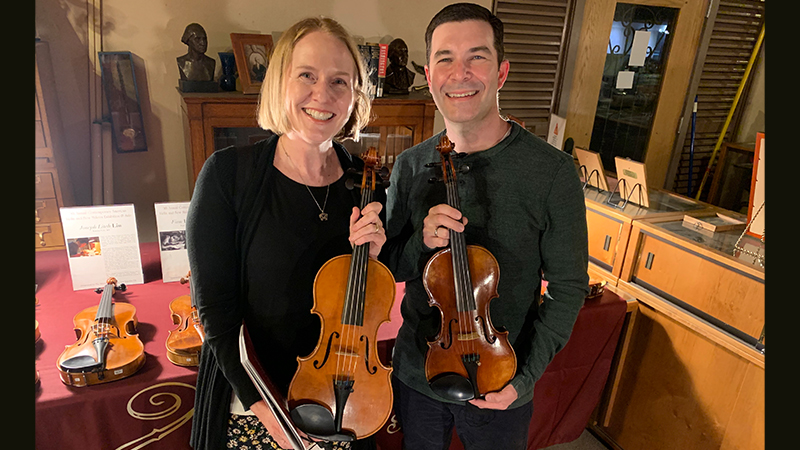 It's hard to believe that it's possible to fall in love with the sound of a violin in the midst of a "tonal comparison" involving the rapid-fire playing of dozens of instruments, all in a row. Such an event can sometimes feel a little like an all-too-sober wine-tasting. But Nathan made it fun and interesting.

For the violin comparison, Nathan changed up the repertoire over the course of the evening, rather than sticking to the same repertoire for all 35 violins. He started with some Bach Preludio and C major Sonata to test the bows, then moved to the beginning of the Bruch Concerto to test the first nine violins; then the opening of the Tchaikovsky Concerto for nine more; then the Brahms Concerto; and ending with some Mozart Concerto No. 4.

Having attending a number of these events, I can say that changing the repertoire helped sustain my interest. While it might seem that the most "objective" and "scientific" thing would be to test them all on the same repertoire, the human brain and ears can only take so much of the same music before losing interest! If everyone's brain reaches saturation and stops listening, then what's the point?

Nathan also offered his subjective reaction to each instrument, and that also proved valuable. Nathan addressed each instrument in an extremely balanced and fair-minded way, also offering insights about instruments and bows in general, and how a player might evaluate them.

For example, he observed that "I think we are drawn to the look of an instrument more than we like to admit." To my eye, every one of these brand-new instruments, most of them made during the pandemic years of 2020-22, were gorgeous - some fairly monochrome, some elaborately antiqued, some showing glorious wood-grain patterns. One could be drawn to a variety of different aesthetics.

Nathan also talked about the playing threshold of various violins - some you can dig into, while for others it's better to back off and let the instrument speak. He also talked about the four strings - he likes it when each has its own distinct character, though other players might like a more even-toned voice across the entire range of strings.

When it came to the bows, he said that "it usually takes a while to dial in with a bow, and I was happy to be able to play right off the bat with all of these bows."

BELOW: Nathan Cole plays four violin bows, followed by 35 violins (two by the same maker). The instruments were played in alphabetical order of maker, which is announced before each one. He starts with a bow by Eric Gagne, then the other makers are announced as he plays their bows and instruments.

Forty-five luthiers and bow makers were represented at this exhibit, and a good number of them traveled to California to be at the event. Here are the ones who attended the violin tonal comparisons: 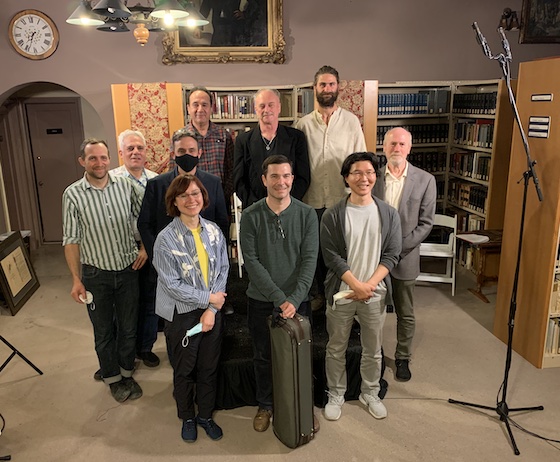 To learn more, you can leaf through this program book that contains a page about each maker, or visit this page, and click on each name, which links to to extensive bios and descriptions of their instruments, with prices. Here are all the names of the violin/viola/cello/bow makers whose instruments were featured in the exhibit:

Toward the end of the tonal comparisons of the violins, I was drawn to the sound of a violin made in 2021 by George Yu, of Louisville, Kentucky, on sale for $26,000. It reminded me of my beloved Italian violin - a sweet and compelling tone that carries well. I was quite curious about it, so I found the violin afterwards - on a table next to Ute Zahn's excellent violin. The last two in the alphabet were marooned on their own table, but that didn't stop me!

As I looked at the violin, my friend Dr. William Sloan - who makes violins himself and has frequently attended the annual Oberlin workshop - came over and said, "Ah yes, George Yu, what an excellent craftsman!" Tom Metzler added that Yu makes his own fittings - pegs, tailpiece, etc. Interesting! I had not heard of or met this maker, but now I wanted to get to know this violin. Fortunately, Metzler Violins was allowing people to take home the violins to try them for 72 hours, so they packed it into a purple BAM case and sent me off with it! (All the instruments will remain in the shop for the next few weeks, for those who wish to check them out.)

I enjoyed my time with this violin, which had excellent volume, as well as a rich and interesting tone on all four strings.

I still adore my own violin, but if I was in the market, this violin would be a great choice, as would be any of these violins curated by Metzler. They are so new and hearty, without even a scratch. And unlike the old fiddles, you know exactly what you are getting when the maker is either standing there, or just a phone call away!

Having owned a modern violin before, I will say that the sound of a new violin is not "set," it will change over time. In fact, you can shape it, to a degree. Playing the fiddle often and playing it in tune, so that it resonates, opens up the sound. An exciting prospect, bringing to life a "new voice"!

March 7, 2022 at 03:19 PM · The Yu is absolutely lovely sounding. I by chance met him this past Saturday at an orchestra rehearsal and had no idea he was working and living in my city/town. I'm eager to play one of his models.