February 11, 2022, 2:29 PM · Welcome to "For the Record," Violinist.com's weekly roundup of new releases of recordings by violinists, violists, cellists and other classical musicians. We hope it helps you keep track of your favorite artists, as well as find some new ones to add to your listening! 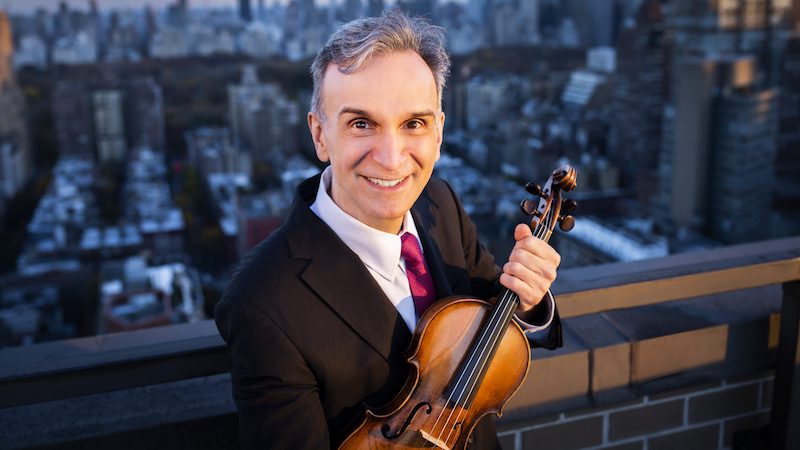 Mozart's five violin concertos, written between 1773 and 1776 when the composer was in his late teens, have remained at the heart of the repertoire for violin ever since. The final three are programmed most often, but in this recording violinist Gil Shaham includes the lesser-heard first two as well. In addition to the five concertos, this album also includes the Rondo in C Major, K. 373. BELOW: Shaham plays Mozart Rondo, K. 373

"This particular album is a companion to the poem 'Last Night As I Was Sleeping,' by the Spanish poet, Antonio Machado - a meditation on the gift of errors, and the mysterious alchemy of transcendence. We never know what new life is birthed from our errors, and from the ability to 'forgive' ourselves into a new identity," said violinist Vijay Gupta. The album "starts with a memoriam - Kaija Saariaho's 'Nocturne,' dedicated to the memory of her teacher, the great avant-garde Polish composer Witold Lutoslawski, and ending with the first movement of Reena Esmail's 'Darshan,' or 'Vision' in Sanskrit, a song for the stars based in the Hindustani raga of Bihag - meant for the darkest point of night. The centerpiece is the 2nd Sonata of Bach, which I performed using a baroque bow. BELOW: Vijay performs "Darshan - Bihag" by Reena Esmail

Along with the popular "Lark Ascending" by Vaughan Williams, this recording includes Kenneth Fuchs' American Rhapsody, and works by Camille Saint-Saëns and Ernest Chausson. Violinist Solomiya Ivakhiv also recorded rarely-heard music by her countrymen, the Ukrainian composers Myroslav Skoryk and Anatoliy Kos-Anatolsky. The score for Kos-Anatolsky's Poem for Violin and Orchestra, written in 1962, was lost. In 2019, Ivakhiv commissioned Bohdan Kryvopust to reconstruct the orchestration from an early recording.? BELOW: Ivakhiv performs Poem for Violin & Orchestra in D Minor, by Anatoliy Kos-Anatolsky.

February 12, 2022 at 05:48 AM · Thank you Laurie for the great blog! I always love Shaham’s playing and now I am a huge Gupta fan. In fact he’ll be giving a masterclass in Lynn Kuo’s Winter Bootcamp later this month. So excited.

February 12, 2022 at 12:20 PM · The links here were my introduction to Gil Shaham even though I have seen him mentioned so many places. His playing of the Brahms Concerto in D is the most exciting tempo I have ever hear it at, if I recall correctly, and gives me new appreciation for this piece. Gil's technique is remarkable to watch and the orchestra was a delight to see. Thanks.