February 2, 2022, 11:53 AM · The Curtis Institute of Music has appointed Benjamin Beilman and Erin Keefe - both alumni of Curtis - to its violin faculty. They will begin at Curtis in fall 2022, teaching individual lessons, chamber coachings and in an orchestral setting. 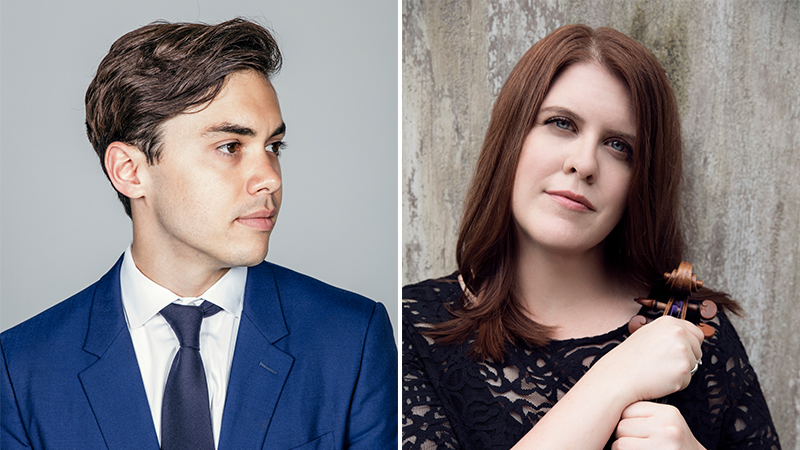 "Erin and Ben are not only my former students, they check every box: incredible musicianship, integrity, stellar violin playing, musical knowledge, and continuity of the great Curtis violin tradition," said Curtis Chair in Violin Studies and longtime violin teacher Ida Kavafian. "They are only three generations away from the great teaching of Leopold Auer, with just my teacher Oscar Shumsky and myself between them. I am thrilled for the future of Curtis."

Erin Keefe, who graduated from Curtis with a Bachelor of Music Degree in 2003, is concertmaster of the Minnesota Orchestra as well as a frequent artist with the Chamber Music Society of Lincoln Center, where she has performed since 2005 and has been featured on “Live from Lincoln Center” three times. Winner of an Avery Fisher Career Grant, the Pro Musicis International Award, she also performs frequently as a soloist with orchestras around the world. Keefe earned her Master of Music Degree from The Juilliard School. Her teachers included Ronald Copes, Ida Kavafian, Arnold Steinhardt, Philip Setzer, Philipp Naegele, Brian Lewis, and Teri Einfeldt.

"I feel extremely honored and humbled to be joining the violin faculty at the Curtis Institute," Keefe said. "My five years studying at Curtis provided me with some of the most formative experiences of my musical life, and I am looking forward to passing on all that I have learned from my incredible colleagues and mentors to the next generation of musicians."

Benjamin Beilman is an in-demand international soloist, having performed in recent years with many major orchestras worldwide including the Chicago Symphony Orchestra, the Philadelphia Orchestra, and the Rotterdam and London Philharmonics. Beilman studied at the Music Institute of Chicago, the Curtis Institute of Music, and the Kronberg Academy, and is a recipient of a Borletti-Buitoni Trust Fellowship, an Avery Fisher Career Grant, and a London Music Masters Award. He has an exclusive recording contract with Warner Classics and released his first disc Spectrum for the label in 2016. Mr. Beilman plays the 1709 "Engleman" Stradivarius on loan from the Nippon Music Foundation.

"I am deeply honored to join the faculty of the Curtis Institute of Music this fall," Beilman said. "My teachers at Curtis have always provided unwavering support and guidance as I embarked on a performance career in an ever-evolving landscape. I’m excited to take on this same role for the next generation of musicians as they carve their own path and bring new voices to our art form."