December 16, 2022, 1:47 PM · You may know of the great Polish-Mexican violinist Henryk Szeryng from Youtube recordings or various sheet music editions - but there is so much more to the remarkable life and legacy of this legendary performer.

"He was a great artist, a great person, a humanitarian - someone who has influenced an enormous number of lives," said violinist Vadim Gluzman, who in 1994 received the Szeryng Career Award from Szeryng Foundation, led by the violinist's wife, Waltraud Szeryng. "It basically started my career, and I owe a great deal of gratitude."

To honor this great violinist, Gluzman and the North Shore Chamber Music Festival (NSCMF) have created a "Tribute to Legendary Violinist Henryk Szeryng" which you can watch for free at noon CDT on Sunday, Dec. 18. (Click here to watch the free livestream). The stream will also be available to watch after that time, at the same link. The tribute is part of NSCMF's new "Masters of the Past, Present and Future" series. 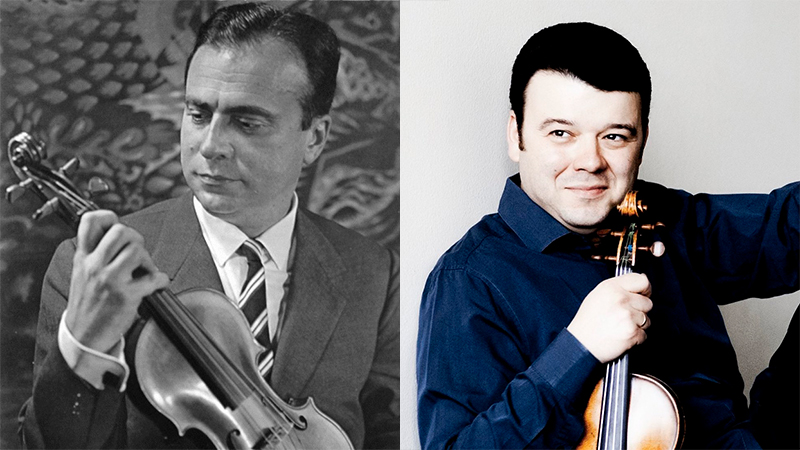 The tribute includes not only live performances of works that were significant to Szeryng's life and legacy, but also a conversation with Waltraud Szeryng and Gluzman, and excerpts of seminal recordings from Szeryng’s discography. You can see the program and read more about it by clicking here. In addition to Gluzman, performing artists will include violinist Julian Rhee, laureate of the International Violin Competition of Indianapolis and recipient of NSCMF's 2020 Arkady Fomin Scholarship recipient; and pianists Angela Yoffe and William Wolfram.

Here is a little background on Szeryng: Born in Warsaw, Poland in 1918 into a wealthy Jewish family, Szeryng studied violin with both Carl Flesch and Jacques Thibaud, and composition with Nadia Boulanger. When World War II broke out, Wladyslaw Sikorski, the premier of the Polish government in exile, asked Szeryng to serve as his liaison officer and interpreter, as Szeryng was fluent in seven languages. Szeryng also continued to perform, giving over 300 concerts for Allied troops all over the world. When he accompanied Sikorski on a mission to Mexico in 1941 seeking a home for 4,000 Polish refugees, the positive reception moved Szeryng so deeply that he decided to become a Mexican naturalized citizen himself in 1946. In 1945 he accepted the request (made in 1943) that he head the string department of National University of Mexico. Szeryng performed regularly with pianist Arthur Rubinstein, sometimes in a trio with cellist Pierre Fournier. In 1960 Szeryng was named Mexican Cultural Ambassador. During his later years he moved to Paris, and he spent his last five years in Monaco. Szeryng died in 1988.

I first became familiar with Szeryng as a HS senior in about '66, when a friend loaned me a two record set of Szeryng performing the Bach Unaccompanied Sonatas and Partitas. Wow! In my view, that is the seminal recordings of those masterworks. Years ago, I purchased my own vinyl set of those recordings, and now I have a CD version as well.

December 17, 2022 at 05:22 PM · I have always sworn by Szeryng's solo Bach recordings and his edition of the sheet music put out by Schott. I think his Mozart recordings are also very good. It is good he is being honored in this way.

December 17, 2022 at 10:52 PM · I will never forget the occasion several years ago when a dear friend of mine first introduced me to Szeryng via a YouTube clip. I had never heard anything like it! Such a luscious, rich tone, yet with beautiful clarity. I'm very happy to read about this most appropriate honor.

December 18, 2022 at 04:52 PM · I've always found Szeryng's performances of Bach's Sonatas and Partitas to be the benchmark against which I've measured all others, but I have found his 1955 mono recording to be far more compelling than his 1967 stereo recording.

December 19, 2022 at 06:49 AM · OK, so I am not the only one who knows Szeryng on the strength of his Bach recordings. A timely reminder for me to listen to those again. What a wonderful tribute! Also-- seven languages! As a linguist myself, I am amazed and jealous.