VIDEO: Watch PUBLIQuartet's Grammy-nominated 'What is American?' in Live Performance

December 15, 2022, 1:05 PM · The New York City-based PUBLIQuartet has been bending the classical genre for more than 10 years, and this year their newest album, What is American? has attracted a lot of buzz - it is currently up for a 2023 GRAMMY Award for Best Chamber Music/Small Ensemble Performance. 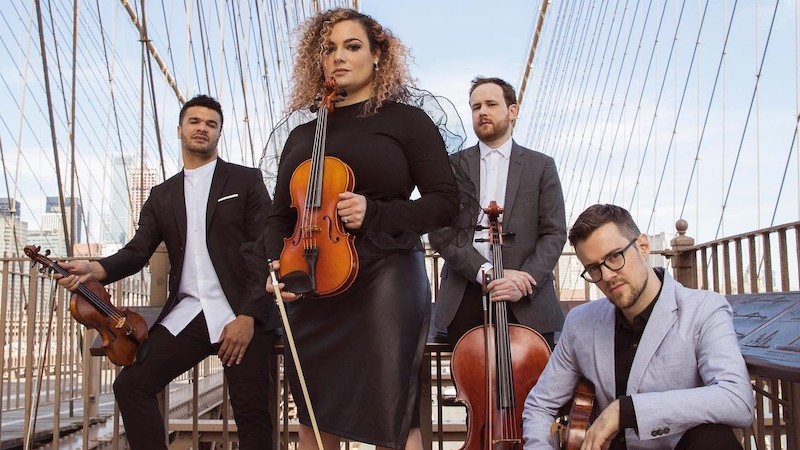 This week the quartet released a video of their live performance of "What is American?" and here it is for you to watch. The group performs from memory, all standing (except the cellist!). I've cued it up to the first piece, "Improvisations on Antonín Dvorak's String Quartet No. 12, Op. 96 'American'" which begins with recorded spoken quotes and disorienting harmonics, which fairly quickly coalesce and morph into familiar strains from Dvorak's "American Quartet," with which they've created some wonderful and innovative improvisations.

Violinist Norpoth has described the quartet's Dvorak "American" improvisations beautifully: "Dvorak's String Quartet is one of the most celebrated in the repertoire," Norpoth said, introducing a 2020 performance for the Banff Center. "Its unique musicality comes from the influence of negro spirituals and Native American folk music that is wound into its writing, and where Dvorak took inspiration. We play on that idea: that American music was like a seed that grew into all the genres that we love today: it grew into spirituals, into Gospel, R&B, Blues, Jazz, Hip-Hop, Rock 'n' Roll, all genres of music that integrate improvisation. In our version we take a journey through the original Dvorak, improvising in those American styles of music."

The recent performance was actually a delayed "Album Release Party" - it was supposed to have taken place shortly after the album's release in June, but was delayed due to COVID - a familiar story during these times!

For background: over the years, PUBLIQuartet has served as artist-in-residence at a number of top institutions including the Metropolitan Museum of Art and National Sawdust and has appeared at a wide variety of venues and festivals, from Carnegie Hall and the Newport Jazz Festival to The Late Show with Stephen Colbert. This is not their first GRAMMY nomination - in 2019 their album Freedom and Faith also was nominated in the same category.