December 13, 2022, 6:10 PM · I suspected that violinist Gil Shaham, conductor Jaime Martín and the Los Angeles Chamber Orchestra would make a great combination - I was right!

They generated so much energy on the stage of the Ambassador Auditorium in Pasadena, Calif. Sunday night - by the end of the Dvorak Violin Concerto, the audience roared with applause, rising to their feet with no hesitation. 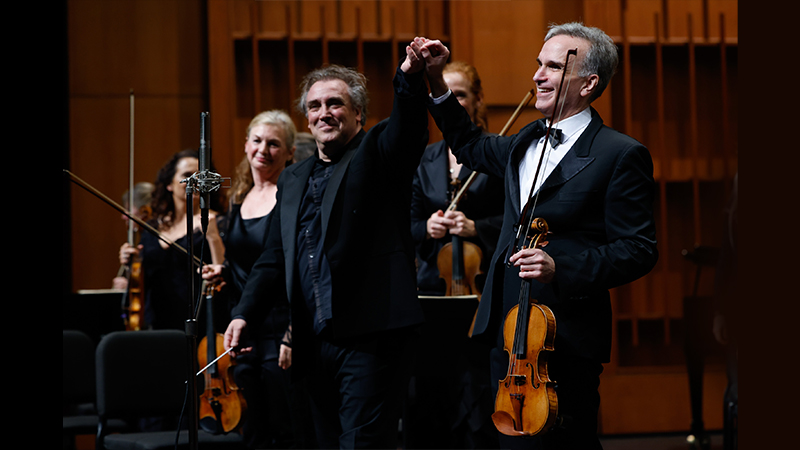 And that was just one part of this concert, which also featured the world premiere of Mexican composer Juan Pablo Contreras' "Seis Luchadores: Lucha Libre!"; as well as pieces by Ligeti, Bartók and Kodály.

Antonin Dvorak's violin concerto isn't exactly considered a "showpiece," and in fact it is played relatively infrequently, compared to pieces like the Mendelssohn or Tchaikovsky violin concertos. But recently it has found the spotlight - this fall it was the winning concerto played by violinist Sirena Huang at the International Violin Competition of Indianapolis, and it was also featured on Hilary Hahn's newest album, Eclipse.

Historic complaints are that it's awkward to play, repetitive, unwieldy.

Not so, played by Gil on Sunday night. For example, in that "long and repetitive" last movement, somehow every repetition felt like a welcome visit from a old friend, thrilling everyone with a new story with every appearance.

I had not heard Gil play live since before the pandemic, and as the first movement began, I was struck by the soulful quality he could draw from the violin he plays (these days the 1719 "Haupt" Strad from Rare Violins In Consortium). 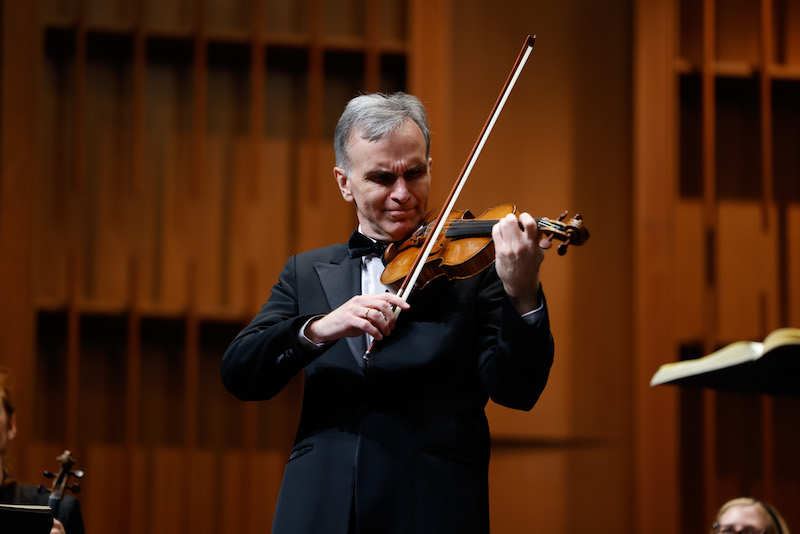 He also clearly delights in collaboration, playing to and with the musical colleagues surrounding him. One minute he was in musical conversation with the first violins, then he would turn to the cellos and converse with them. His attention always encompassed the whole orchestra.

In the beautiful second movement, Gil showed so many facets - playing in a whisper, then playing like a bird dancing around the melody. Even when not playing, he seemed almost ready to explode with the orchestra's energy, as he watched conductor Jaime Martin relishing the drama of the majestic and soaring orchestral interludes.

The last movement, with all its variations, also put on display Gil's intricate, fast, high playing, as the solo part danced along the top of the rollicking orchestra. It was joyful and buoyant. As a violinist I certainly noticed the abundant octaves and overall demanding technique required by this piece - and how Gil just tosses it off in stride. What a player.

For an encore, Gil played the Gavotte en Rondeau from Bach's Partita No. 3 in E major, with conductor Jaime Martín remaining onstage - concertmaster Margaret Batjer generously sharing her chair - to watch him play. Again, he played as much to everyone onstage as those of us in the audience. 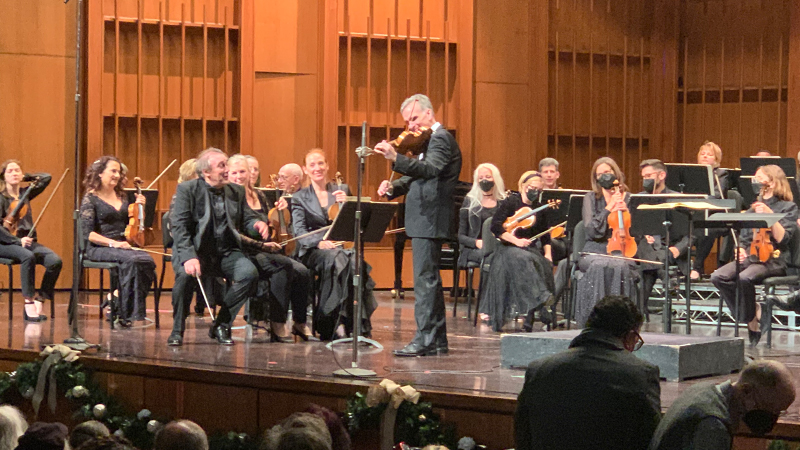 He threw in a little Baroque decoration -- seemingly lobbing it right at Jaime and Margaret. The effect was cute and heartwarming. I recalled watching Gil perform the entire Six Sonatas and Partitas by Bach in 2015 and Disney Hall - what a treat, now as it was then. When the audience applauded his encore, Gil insisted that the entire orchestra stand to accept the recognition.

While I tend to focus on the violinist in any concert, I would be remiss if I did not mention the rest of this very inventive and engaging program by LACO, especially the very first piece on the program by Juan Pablo Contreras, who was on hand not only to watch the performance, but also to talk about the piece and to accept an award (a commemorative coin) on behalf of the Mexican Consulate of Los Angeles. Cultural Attaché Cynthia Prida, who made the presentation in celebration of the 200th Anniversary of diplomatic and cultural relations between Mexico and the United States and in recognition of Contreras’ significant binational artistic contributions, called him the "most important Mexican composer we have today."

Contreras's piece, "Lucha Libre!" was inspired by the highly choreographed Mexican wrestling matches he witnessed, growing up in Guadalajara. Following the tradition of Lucha Libre!, Contreras pitted three "villains" against three "heros" in a musical "wrestling match" - complete with masks made by the composer's wife Marisa. (In the end it proved too difficult to play in the masks, so the masks sat on posts next to the orchestra members representing each character.) The "evil" characters included Don Diavlo, principal cellist Andrew Shulman; Astro Tapatío, principal trumpet David Washburn; and La Kalva, principal timpanist Wade Culbreath. The "heroes" were San Silver, concertmaster Margaret Batjer; Volátigo, principal flutist Sandy Hughes; and "Dominus," pianist Robert Thies. 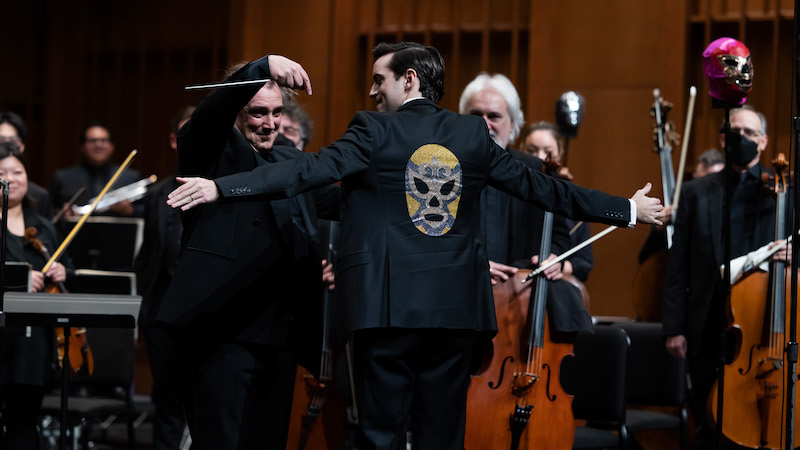 Prior to performing the work, Contreras introduced each character, and the orchestra played each character's musical theme. He also noted that the "slapstick" represented literal slaps in the fight, and the bass drum represented the referee - when it sounded three times, the match was over. This actually helped a great deal - it was very easy to understand which character was being featured as the music progressed. There were also moments when it sounded like some passed out - a high pitch ringing alongside dizzy wah-wah music. In this humorous environment I imagined birds flying around someone's head, as in the cartoons of old!

Who "won" this "match"? To me it sounded like, in the end, everyone was taking on the violin's theme. So the violin won! Right?

The second half of the program featured music inspired by folk music, including a tonal piece by György Ligeti from his earlier years called "Concert Romanesc"; the orchestrated version of Béla Bartók's "Romanian Folk Dances"; and Zoltán Kodály's "Dances of Galanta."

The orchestra also was celebrating the long tenure and pending retirement of violinist Julie Gigante, who is leaving her post in the first violins to devote herself full time to being a family and marriage psychologist. Julie is also known locally (and perhaps beyond!) as the Violinist in the Green Dress, as she is featured prominently in a giant mural. 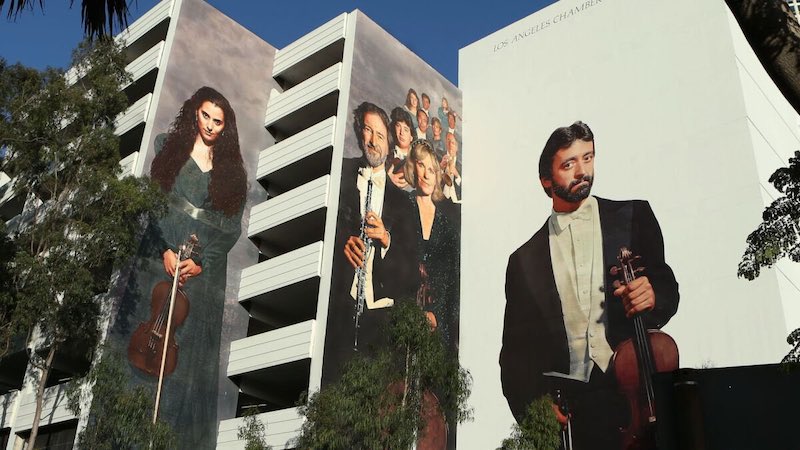 The "Harbor Freeway Overture," aka the LACO mural - violinist Julie Gigante is on the left.

Painted in 1994 by artist Kent Twitchell, the mural still can be seen today from Los Angeles' 101 freeway. To honor Giganti, they gave her a framed piece of art, based on that image. 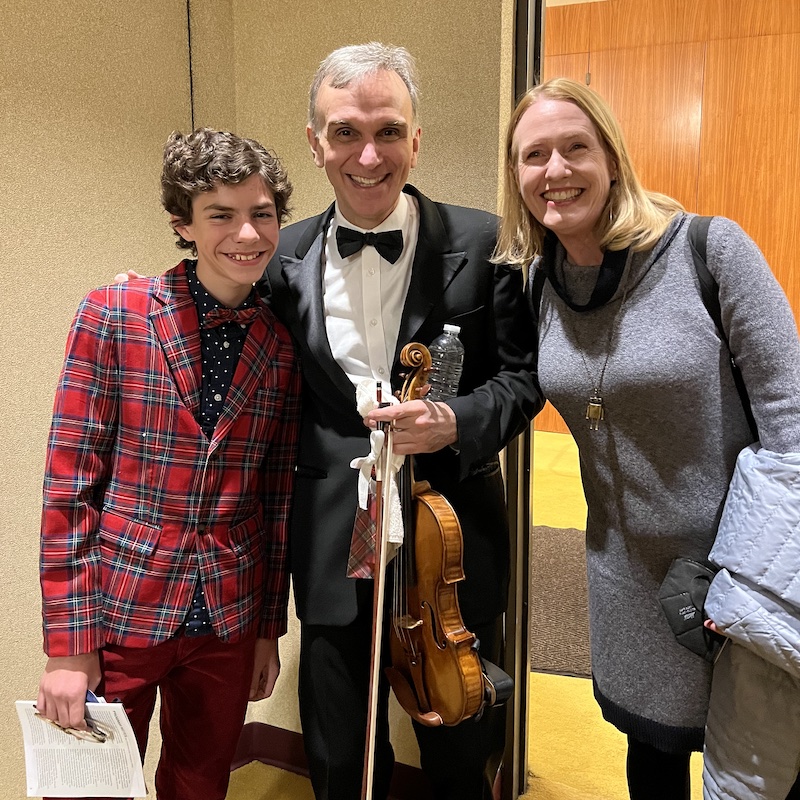 Gilharmonic reunion! Grant Jensen joined me in greeting Gil after his performance. Grant played for Gil in Gilharmonic Episode 3 in 2020.

December 14, 2022 at 07:53 AM · Superb artist, and it sounds a wonderful orchestra - I'd love to hear them one day. AND a great programme! Thank you for writing it up with such thoughtful enthusiasm, Laurie!

December 14, 2022 at 07:27 PM · Laurie, I feel like I was there (and certainly wish I had been). Thanks for this review! And I remember young Grant from Gilharmonic. What a wonderful photo of all three of you!