December 7, 2022, 1:58 PM · Not only is Gil Shaham one of the finest violin virtuosos of our time, but his ideas and perspectives about music are also incredibly interesting to hear. I learned that well during the days of our pandemic project in 2020 - eight episodes of Gilharmonic, with mini-master classes, interviews and plenty of music banter.

So I was more than happy to talk to him about his upcoming visit to Los Angeles this weekend, during which he will perform the Antonín Dvorák's Violin Concerto in A minor with the Los Angeles Chamber Orchestra (at 7 p.m. Sunday at the Ambassador Auditorium in Pasadena, click here for info and tickets) - and he will also teach a master class at the Colburn School (at 11 a.m. on Saturday, click here for more info). 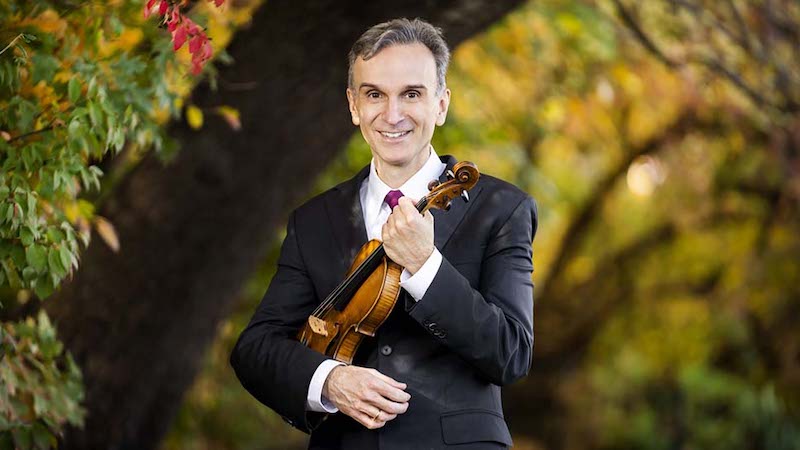 We spoke on Monday over the phone. Gil was in Paris - where he was preparing to perform the Brahms Violin Concerto with Orchestre de Paris right before coming to Los Angeles. The Brahms violin concerto is played frequently, but the Dvorak concerto?

Dvorak is one of those great 19th-century European composers, hailing from what was then Bohemia, but is now the western Czech Republic. But fascinatingly, during the prime of his career, from from 1892 to 1895, he spent several years in the still-very-young United States, as director of the National Conservatory of Music of America in New York City. It's fair to say that Dvorak's own artistry was profoundly shaped by the music of America -- and that classical music in America was profoundly shaped by Dvorak's artistry and observations about it.

"The violin concerto is equally masterfully written and equally as moving as the cello concerto," Gil said. "But it's a little bit like the New World Symphony and the other symphonies by Dvorak - maybe Dvorak's 7th Symphony isn't played as much as the New World Symphony, but it's one of the great, great masterpieces."

"There are turns of phrases throughout the first and second movements, I'm thinking of actual turns and trills, that sound very 'Bohemian,'" Gil said. "And the last movement is like a typical furiant and dumka, like something you would find in the Slavonic Dances. It's a little bit in rondo form, the 'furiant,' and every time it comes back it's a different setting, and surprising, and perfect, and propels the story forward. It's the perfect cap on the piece."

"The second movement of the Dvorak violin concerto, it just breaks your heart, it's so beautiful," Gil said. "There is something about it that's very bucolic, very beautiful."

"Dvorak is just the most amazing composer," Gil said. "He was obviously fluent with violin writing. I recently played his Sonata, which I love to play. And I played the F minor trio, and the Romance - we really are very lucky with the repertoire he's left for us. He was one of the great, great composers."

For the concert, Gil will play on the 1719 "Haupt" Strad, which he has had on loan from Rare Violins of New York In Consortium for the last several years.

After all the pandemic disruptions of the last few years, Gil has had an exceptionally busy season this year. "For a few seasons many things got postponed - so they all ended up happening this year," he said. "It's great, but it was maybe a little busier than what my ideal balance would be."

He and Adele Anthony (his wife) continue to teach a small studio at Bard College Conservatory, sharing a studio and sharing students. Just three, at the moment! "We wanted to err on the side of not having too many students," he said. "They're so amazing, it's incredible to be around them and learn from them."

Gil also has a few recording projects in the works that will come out over the next few years: a recording of the Korngold Violin Concerto with David Robertson and the St. Louis Symphony; a Prokofiev album with three different Prokofiev performances; and then a project of new works.

"I've been very lucky and honored over the years that some very brilliant composers wrote pieces for me. But we never got around to recording them," he said. "So we've recorded Scott Wheeler's violin concerto, called "Birds of America"; and Avner Dorman's violin concerto, which is called "Nigunum." We will record Bright Sheng's violin concerto, "Let Fly" in January, with Leon Botstein conducting the The Orchestra Now (TON) at Bard. I love the pieces, and I'm very excited we'll release them." "

If you are in the Los Angeles area and wish to attend either Gil's upcoming concert or master class, here is the information:

Master Class with Gil Shaham: 11 a.m. on Saturday, December 10 at the Colburn School's Thayer Hall in downtown Los Angeles. The event is free but tickets are required; click here for more information and to get tickets.

December 8, 2022 at 03:42 AM · I have always been amazed by how humble Gil Shaham is. Isn’t it great how he says he can learn from students and really mean it.

All of my Mentors joyfully admitted learning and/or refreshing their musical acquaintance through working with very gifted pupil's including Jascha Heifetz and Nathan Milstein, both of

The GOAT Violinists were both immensely humble displaying this quality whilst teaching and later when one was Concert Touring and Recording on the spot, internationally!!

Gil Shaham is a very kind and warm hearted artist with inner personal warmth heard in all of his Violin w/Orch Masterworks no matter the Venue ~ We initially met in Los Angeles, when

I was home visiting Family members and numerous musician colleagues most of whom were in the LA Philharmonic, and on that occasion featured Violinist, Gil Shaham, in the Brahms Violin Concerto, which was most lovingly conveyed ~

Today, the 8th of December, 2022, marks the One Hundred & Fifty Seventh Birthday of Finnish Giant termed the Greatest Moral Composer, Jean Sibelius, since Ludwig van Beethoven! Having met and performed by honoured Invitation of All Five Sibelius Daughters & Madame Sibelius, for the actual B-Day

Centenery of Jean Sibelius offering his 'Adagio di molto' of the Violin Concerto, 8th December in anno 1965, and just outside Helsinki, in Hameenlinna, FI, in the depths of Finnish Winter, in the Birth - House of Sibelius, inaugurated by Finnish Minister of Culture, following our public performance, proclaimed the "Sibelius National Memorial Museum' & with Finnish Sibelius Academy of Music, Pianist, Mary Lakos, I can attest to Grand Humbleness of The Inner Sibelius Family with great warmth in 25 minus Zero Weather on The 100th Birthday of Classical Music's Luminary Composer, Jean Sibelius!!!!!