It's another to spend a week playing chamber music with that famous violinist, while also having master classes and lessons. That is what about 27 students at the Colburn School had the opportunity to do when violinist Tessa Lark came to Los Angeles for a residency at the school in October. 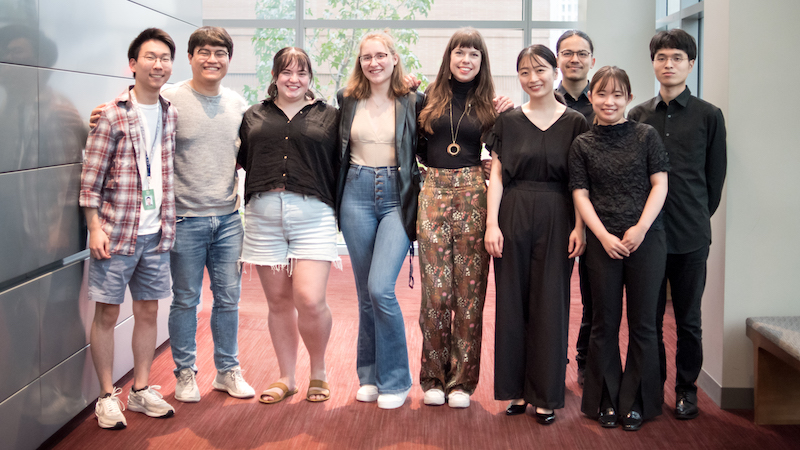 Violinist Tessa Lark (center) with participants in a chamber music master class at The Colburn School. Photo by Abby Mahler.

A graduate of the New England Conservatory and The Juilliard School, Lark is a versatile musician who is as comfortable improvising bluegrass as she is performing the Sibelius Violin Concerto. She was the inspiration for SKY, a bluegrass-inspired violin concerto that was nominated for a 2020 Grammy for Best Classical Instrumental Solo. She also has a raft of awards, including a 2020 Lincoln Center Emerging Artist Award, 2018 Borletti-Buitoni Trust Fellowship; 2016 Avery Fisher Career Grant; and 2014 International Violin Competition of Indianapolis Silver Medal.

"I've never done a residency quite like this - I felt like I really got to know these students," Lark told me with enthusiasm, after her Chamber Music Master Class, which I attended on Oct. 14 at Colburn's Thayer Hall.

After watching the class, I definitely wished I could be one of those students. Lark was tenacious about getting results while still being respectful and creative in her approach. Not only that, but she was also full of great ideas and inspiring images, as well as effective technical suggestions for making those ideas happen.

The class began with an energetic and intense performance of the first movement of Mendelssohn's Piano Trio No. 2 in C minor, Op. 66, by violinist Wenqi Ke, cellist Sanga Yang and pianist Ryota Yamazaki. (here is a recording of a different group playing the piece, for reference).

Then she described what she meant: she wanted less dolce, more grit. She wanted them to bring out the brooding nature of the opening.

"The downbeat should not be comforting," she said, "it should be fateful."

She worked with the cellist, who repeats a seemingly simple C in the beginning - but it's important. She wanted more motion, more urgency.

"A lot of the edges are softened and smoothed over," she said. Instead, she wanted more of the "fuoco" ("fire") that is in the title of the movement - "Allegro energico e con fuoco."

How to do it? With left-hand articulation - "there is an agitation and electricity in the hand," she said. She also called for a furious focus on the beat, "feel 32nd notes in body."

When playing subito forte (marked sf, for suddenly loud) "don't immediately dissipate the energy just because it is followed by a soft dynamic," she said. Follow through with the note until the soft dynamic actually occurs.

In certain sections the piano has the heartbeat - "very human, foreboding," she said. Aim less for accuracy and more for that fire. "None of it should feel easy, it is struggling," she said. It is not supposed to be a smooth ride, and the music loses something if it is made into that.

She also urged the cellist to play out - "in those moments, you have to feel like your are playing the Elgar or Dvorak concerto," she said. Likewise, the pianist should keep dynamics in check when playing notes that are in that same register as the cello.

Next was the beautiful third-movement "Andante" from Brahms' Piano Quartet No. 3 in C minor, Op. 60, with the cello solo played by James Baik. Other performers in this quartet were violinist Vivian Kukiel, violist Abby Smith and pianist Samuel Glicklich. (Here is a recording by a different group, for reference)

"It's so beautiful,and I'm so partial to Brahms," Lark said after their performance. "I feel like there is a resistance in this movement that makes it really powerful."

And part of that power lies in restraint - being very judicious with dynamics. For example, the dynamic should not reach "forte" until the end of the movement.

"If you give away your heart and soul too soon, it's a missed opportunity," Lark said. She asked for fingerings that would keep the dynamics in check - like going up on the A string earlier in the piece, reserving the brighter E string for the end.

Mozart once said that an Andante should "flow like oil," not like water. "It felt like the flow here was a little watery," Lark said. For example, triplets felt carefree - they needed a little more resistance.

Lark found ways to get the performers to focus more on how each of their sound and musical part related to one another's. She asked that the cello fit its tone into the bass note of the piano.

She had them to do an exercise: to imagine projecting the sound into each others' instruments. "Match the sounds more," she said. "Believe in exactly what you are feeling and then exaggerate it, 30 percent more."

Lark was clearly going for artistry and expression, and this group really responded.

The last group was a string quartet, with violinists Kyoka Misawa and Rintaro Kikuno, violist Itsuki Yamamoto and cellist Anri Tsukiji. They played the first movement of Beethoven's String Quartet No. 12 in E-flat Major, Op. 127. (Here is a recording by Quartuor Ebene playing the piece, for reference.)

This was a group that breathed together, made a big sound and played with a lot of physical motion. In fact, they were so well-rehearsed, they tended to keep to their practiced ways, even when trying something new.

Lark worked with them to achieve more flexibility and range. She encouraged using more expression, texture and tenderness. The key was in the details: lightening eighth notes, bringing out dynamics, using vibrato, encouraging more playfulness.

Lark tried an exercise inspired by cellist Merry Peckham: choose one person in the ensemble and then "live, breathe and die" for that one person. That meant looking at the person - in this case the second violinist -- and valuing their part, bringing it out, above all. "Try to BE this violin!" she said. It was actually a rather complex exercise. One might achieve it by playing less, but as Lark said, "playing 'less' doesn't mean 'don't do anything.'" One has to be present, but ultra-aware of and connected to that one voice.

Her main point: while striving to be a tight ensemble, "don't take for granted the individuality of each one of you."