V.com weekend vote: Have you ever conducted, or led an ensemble or student group?

January 22, 2022, 12:14 PM · This week I spoke to two violinists who are also aspiring conductors - they are Salonen Fellows at the Colburn School who may be writing some blogs here on Violinist.com about their experiences. They mentioned that it gives you a pretty different perspective, making music from the podium vs. in the section. 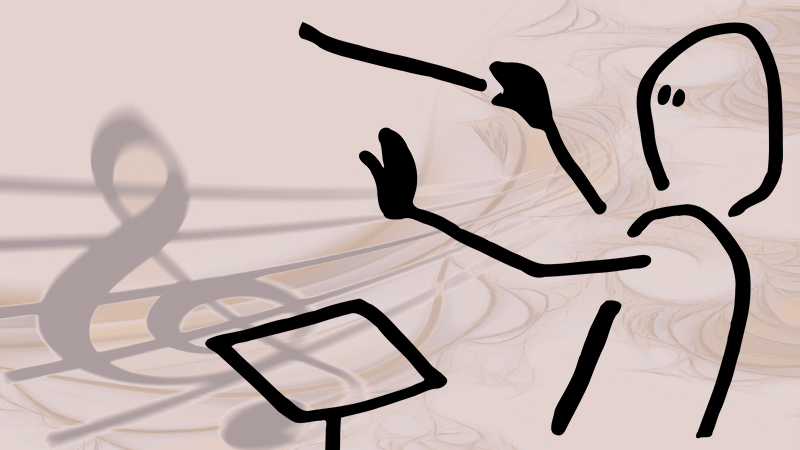 The conversation made me think about the fact that a lot of conductors have emerged from the string sections of orchestras - after all, Gustavo Dudamel played violin, as did Jaap van Zweden. And of course there are artists such as Joshua Bell and Itzhak Perlman who turned to conducting after having an established solo career.

Personally, my experience leading musical groups is mostly as a teacher. I have led many, many Suzuki groups, from the violin, and conducted some student ensembles on occasion. I've also played as the first violinist in quartets, which does involve some leading.

However, when it comes to classic "conducting," I don't own a baton!

Have you ever taken to the baton, or conducted from the violin? Was it a full orchestra, or a smaller ensemble? Was it a pro group, or are you a teacher who conducts student groups? Please participate in the vote by choosing the answer that feels most appropriate (recognizing that you may have several answers!) and then tell us all about it in the comments!

January 22, 2022 at 09:47 PM · I have done quite some quartet playing, as both first and second violinist. This involves some leading, even for the players of the middle voices (think of the beginning of Haydn's "lark" quartet!). I do not consider that anywhere near "conducting".

January 23, 2022 at 03:52 AM · Have played chamber music, been a section leader, and led sectionals where I sometimes put down my viola and conducted, but never conducted a full ensemble. The closest I've ever come to conducting a full ensemble was a "middle strings" (combined 2nd violin + viola) sectional.

January 23, 2022 at 04:02 PM · When I was taking my A Levels at sixth form here in the UK, I developed an interest in conducting. At college, a session band ran every wednesday lunch time and I conducted a song for that once (a James Brown one irrc). One of our set works we studied during our second year was a Haydn symphony (no. 26, mvt 1). We had to do some rearranging, but our class and a couple of others from both school years made it playable (we didn't have the exact instruments). So I conducted that in a couple of rehearsals and the concert with no score (I knew it from memory, having studied it quite intensely). My youth string orchestra conductor was very supportive of my ambitions and let me conduct the full group (there was about 50 of us aged 7-19). But that was just like pop songs or movie/TV themes. The only classical thing I've conducted is the Haydn. I've never led an ensemble as concertmaster though.

January 23, 2022 at 05:49 PM · My wish to become a conductor at the beginning of my studies 1959 was denied by professors of a famous Academy for Music in Germany, because I could not play good enough the piano. So I started to study the violin. Later, during my first job as a concertmaster I became a first violist in the same orchestra, swiched then to two other orchestras, where in the last one I served until 2006 as first violist. 1990 I had the unexpected chance to conduct a non-prof string orchestra and succeeded in my first concert. Two years later I became the musical director and "chief-"conductor of it. Suddenly some prof-orchestras invited me for concerts in their concert series, and very quickly I was invited to many other orchestras, even in other countries (France, Italy, Poland, Latvia, Russia and some more), and I felt always like in heaven while conducting. I never joined a conductors lesson, nor master-class. I always thought, that I should have become a conductor from my very beginning. But 2010 my ears got bad and I had to stop every music activity. I miss it very much, but I remember very often those times... So, what I have to say to all musicians: TRY IT, you never know, what comes out of you besides of playing the violin, the cello, flute, trumpet or what else! Good look!

Jake - will you do conducting courses or study, perhaps with the idea of doing some conducting later?

January 23, 2022 at 06:39 PM · When I was in conservatory in the 70s women rarely took conducting classes, and it never occurred to me to do so. 20 years or so after I graduated the orchestra conductor in the university where I taught left, and the chair of the department talked of disbanding the orchestra. I said - famous last words - "I'll conduct it myself before I allow that to happen!" The rest is history. I've been conducting that university orchestra for 20 years or so. I still don't think of myself as a conductor, but as a teacher of orchestral music and techniques. And I'm still first and foremost a violinist and chamber musician.

January 23, 2022 at 07:14 PM · Thank you, Richard. Yes, I always wanted to share my experiences to my students. Everyone is happy in his position he/she achieved in his life, which makes me totally happy. - Even I received an offer for teaching conducting from an Italian Music Conservatory (being already chief-conducter in that city!), I did NOT accept, but well for violin, viola, chamber music, contemporary music

I have led student orchestras and/or  ensembles of various sizes many times both with and without a baton. I have also led a Suzuki group countless number of times. So both of these options have equal priority in termes of putting a vote. This is part of my employment as a teacher on a music school.

Independent from that I have played chamber music most of my life. A lot of string quartet playing but also other types of chamber music. When playing chamber music there is no conductor nor a leader. It is team work, a wonderful and fantastic type of team work.

January 24, 2022 at 04:26 AM · I was concertmaster of a town and gown orchestra a few years ago when I got a call that the conductor had injured his back and they needed someone to conduct the rehearsal. Although I'd studied conducting both as an undergrad and grad student, this was the first time I'd used my skills (>30 years later!). I had about 3 hours to prepare - I chose to work on the Haydn symphony, since that was what I had a score for. It was actually quite fun, although I was really concentrating on my clarity, and only giving a few cues. The players complimented me afterwards, and I was gratified to hear it. Aside from the ensembles in conducting class, this was my only time to conduct.

January 24, 2022 at 07:51 AM · Richard, I am looking to start lessons with a local teacher who also teaches conducting and is a part time lecturer at my local university. Ultimately I'd like to set a summer community orchestra where we do 2 works quite intensively over 3 to 4 days in late July/early August and then play it in a concert with myself conducting it. Only trouble is, I'd be paying out of my own pocket for it...

January 24, 2022 at 12:13 PM · I did conducting class one year. The bad news is that I was useless at it, I became very self conscious and used to stare at my left foot. The good news is that I became a much better orchestral player, I now usually know what a conductor is trying to do even if I cannot do it myself.

January 24, 2022 at 06:02 PM · Conducting is one specialty that an already trained musician can start later in life and have a reasonable chance at actually doing it. Some very famous soloists make the switch to conducting later in life. I had 3 conducting classes at the local college about age 50. I am unofficial assistant conductor for my community orchestra for rehearsals. I was director of a student string orchestra for many seasons.

Like Eckart I disqualified myself far too long because I am not a pianist. I was under the impression that score-reading at the piano was a necessity. And at that time, I believe that the customary entry level position for an aspiring conductor, at least in Europe, was rehearsal pianist in Opera companies. Two important conductors whose names I will not mention recommended that I pursue conducting. I was very surprised at that, did not consider it to be possible.

The baton is the cheapest instrument in the orchestra and never plays a wrong note.

January 24, 2022 at 06:09 PM · I haven't done very much conducting, just for classes at school, but it was a great experience to conduct and lead rehearsals for a chamber orchestra piece I wrote in 2018. The musicians were some of my friends and teachers, and that helped ease some anxieties going from violinist to needing to prepare this piece for my recital. Trying to speak to my musicians so they would understand the moods I wanted at various points within the piece was very helpful as a composer, and I was able to take from the conductors I've worked with playing in the violin section to help with that.

January 24, 2022 at 06:32 PM · For 40 years I conducted community and youth orchestras in Danbury, Cheshire, and Norwalk, Connecticut. I guest conducted a few school festivals and also directed chamber ensembles. 'Only had the pleasure of conducting pro's once when I was paired with the Jupiter Symphony Strings for a young persons' concert at the Charles Ives Center in Danbury.

January 25, 2022 at 07:52 AM · Jake - nurture your conducting dream and give it time! Perhaps spending money on the idea is not such a good plan: many posts here speak about chance opportunities to cover for a conductor's illness, or section rehearsals. Choir membership gives opportunities too, though I don't know whether you are a singer. Jump in confidently when these arise, as most people are very grateful when a meeting or rehearsal is rescued rather than lost. My little conducting/leading work has been all of these, and I've never had lessons or ambitions in this field.

A couple of further things you might find useful: 'The Cambridge Companion to Conducting' (ed. José Antonio Bowen) and there is a collection of conversations between Seiji Ozawa and Haruki Murakami - my copy is in Spanish but it shouldn't be difficult to trace.

January 26, 2022 at 06:04 PM · While at "High School" (using American terminology), I did once get to conduct the school Junior Orchestra in a version for school orchestras of the slow movement of the Italian Symphony. For conducting, I'm afraid, that's about it. In my last two years in the instrumental ensemble section of the House Music competition (By then, there was just that, the vocal quartet section and the whole house unison singing section), I composed the music my house ensemble played, so I suppose I must have led those ensembles. I've played first violin in chamber music enough times, with the occasional performance, but without consciously "leading".