January 20, 2022, 2:06 PM · Violinist Sean Lee was just a teenager when he was studying with one of the most famous violinists who ever lived - Ruggiero Ricci. 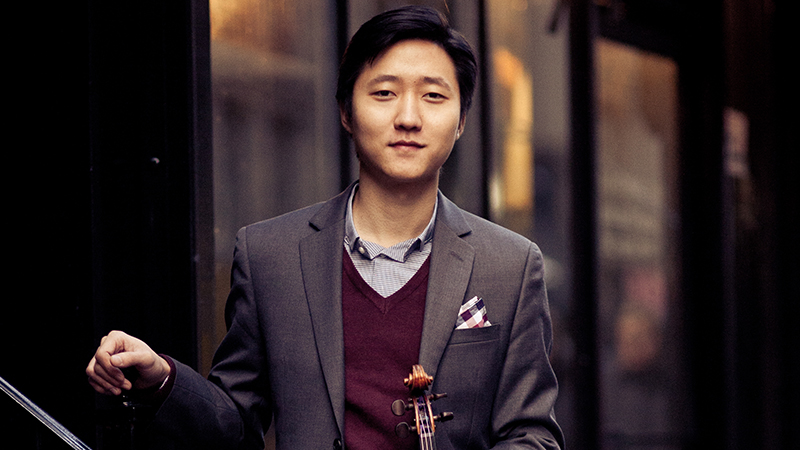 Among other things, Ricci is famous for his legendary achievement as the first violinist ever to record all 24 of Niccolò Paganini's wickedly difficult Caprices, in 1947.

"One of the incredible things about studying the Caprices with Ruggiero Ricci was that he would often demonstrate and make it look so easy," Lee told me in an interview this week. "In retrospect, I think this made a big impact -- it took away a lot of the intimidation I felt. I would play some Paganini for him at every lesson, but we spent much more time on other repertoire. I think this was key to learning them initially -- not treating them as some ambitious project, but simply as a daily part of my studies."

Now, 75 years after Ricci's monumental accomplishment, Lee has both followed in his mentor's footsteps and plowed some ground of his own. Next week, on Jan. 27, Lee will perform all 24 Caprices live in a recital presented by Chamber Music Society of Lincoln Center. There's a twist - Lee will be playing them with pianist Peter Dugan in an arrangement made in the 1850s by Robert Schumann. The arrangement adds piano but leaves the violin part as written by Paganini. (Click here for information and tickets for the recital, which can be seen via livestream or live at Rose Studio in New York City.)

Here are Lee and Dugan, playing Schumann's arrangement of Paganini Caprice No. 20:

What is the history behind this Schumann arrangement?

"Given the timing, there's reason to believe that Schumann wanted to make this arrangement because Joseph Joachim came to the scene," Lee said. Joseph Joachim (1831-1907) is famous as the violinist who premiered the Brahms concerto and who wrote many of the major violin concerto cadenzas that violinists still study and use today. "Maybe he thought Joachim could and should perform them, but he wanted to add some color and turn them into concert pieces?"

Why play this arrangement, rather than performing the Caprices solo, as Paganini originally wrote them?

"I love playing them with the piano because it puts me in a more musical mood, taking my mind off of the technique somewhat," Lee said. "Peter once said, while speaking to the audience, 'I'm playing Schumann. Sean's playing Paganini, but I'm playing Schumann.' It was so interesting to hear him put it that simply. Since the violin parts are unchanged, it's really true -- you're listening to two composers simultaneously for a full program! What a special collection."

Does it make the Caprices feel easier, to play them with piano accompaniment?

"Maybe it is easier on an emotional level because I feel more inspired with more color and harmony; but since I get more carried away with the music, I also find myself overplaying and exerting myself irresponsibly," Lee said. "I guess I haven't collapsed on stage yet, so it seems okay for now!

It's actually not the first time that Dugan and Lee have played the Paganini Caprices together, nor is it the first time Lee has given a marathon performance of all 24 in a row, accompanied or not.

"The first Caprice that I learned was No. 15, and I had done my initial study of all 24 by the time I was 17 years old," Lee said. "But the first time I actually played through all 24 in one sitting was not until many years later, a few months before my first performance of all 24! That was in 2017."

A top prizewinner in the 2008 Paganini Competition in Genoa Italy, Lee gave his first performance of all 24 Paganini Caprices in 2017. Originally from Los Angeles, Lee also studied with Robert Lipsett at the Colburn School and Itzhak Perlman at the Juilliard School. He now lives in upstate New York.

"I didn't have any desire to perform the Caprices until several years after my initial study," Lee said. "I really cared about studying them for my own development."

During those early lessons with Ricci, Lee learned first-hand about his unique approach -- some might call it a revolutionary approach -- to left-hand technique, which is outlined in his book Ricci on Glissando. The approach, which involves crawling around the fingerboard, actually hearkens back to "old ways" of playing the violin and has special relevance for playing Paganini. ("Glissando" is a finger-sliding technique.)

"I was studying with (Ricci) while he wrote his book on glissando, so we would do a lot of his exercises together," Lee said. "For me, it was the start of breaking away from the idea of 'learning the positions,' and instead, learning the fingerboard itself and its distances. This way of approaching the fingerboard has become more and more important as I've played the Caprices over the years. The Caprices constantly break outside of the mold of what has become the traditional left hand approach, although really it's the other way around -- when Paganini wrote the Caprices, the chinrest hadn't been invented yet, and our modern technique that grew out of using a chinrest became less free in some ways."

"Mr. Ricci often would show me ways to be more efficient, and considering he used to play through the 24 Caprices every morning, it's no wonder that he had found countless ways to make things easier!" Lee said. "He was such a unique artist and violinist, and one of the big differences, studying with him, was that he would pick on every little detail to his satisfaction. I think I've gone in a different direction with my own interpretation of the Caprices by taking generally slower tempi, but maybe that's still Mr. Ricci's influence, because he would often say that his own recordings were too fast."

So does Lee have a favorite Caprice? Does he have one that he considers hardest to play?

"As for my favorite Caprice, I think I would have to go with No. 4," Lee said. "Hardest to play... Maybe No. 8? But that might be because I don't like it so much musically - it's a lot better with the Schumann."

"But the one that took me the most hours was Caprice No. 5 because of the original bowing," Lee said, that is, flying staccato, three down-bows and one up-bow.

"It really didn't come naturally to me at all, but I kept thinking I was close to getting it...except I wasn't close," Lee said. "It really took me more than 10 years of trying it, leaving it, reexamining it, and repeating. Maybe if I knew when I started how long it would take for me to get it, I would have abandoned it!"

Lee plays on a violin made by Spanish luthier David Bagué - a violin that was originally made for Ricci.

"The violin I play by David Bagué was one of Mr. Ricci's favorite instruments," Lee said. "When I met Mr. Ricci, he had already parted with his del Gesù, and eventually after he sold his Balestrieri, he kept this as his main violin. I was borrowing an instrument at the time, and he felt that I needed an instrument of my own. He suggested that we (as in, my parents) commission a new violin from David Bagué, and he would take that new one so that I could have this one."

"He had full confidence that he would be happy with any violin by David Bague, but this one had held up against the great Stradivari and Guarneri violins in his experience, and he wanted to be sure that I would 'never need another violin again,'" Lee said. "I have played this violin in chamber groups with Stradivarius violins, and I've felt completely at home --it sure does hold its own! I'm so grateful to Mr. Ricci for that."

Lee started a project a number of years ago, called Paganini POV, a series of videos that show each Caprice from the player's point of view.

"I got the idea for Paganini POV in a moment of inspiration while practicing, and I remember it well. I had a flight later that day, but I was so excited about the idea that before I left the hotel, I used a necktie to tie my phone to a ruler, which I then tied to my head--and tested it out," Lee said. "I ended up buying my first GoPro at the airport later that day. Maybe a bit impulsive, but I really liked the idea of having a personal project of my own, and hopefully sharing some insights that I had gathered over my years of practicing the Caprices."

"It always means a lot when people comment on my videos about how educational they find them to be. And when people comment on how beautiful the music is, it's a nice reminder, because I think a lot of violinists, myself included, get so caught up in the technique that we forget how great the Caprices are as compositions!" Lee said. To that end, he also created a series of Technique Talk videos, in which he talks about the various violin techniques required for each specific Caprice. He even has a video outlining the order he recommends for learning the Caprices.

Lee said he would like to encourage fellow violinists to learn the Paganini Caprices - not to be intimidated by them.

"Playing Paganini is a great stretch for developing violin playing, and there is so much to gain by spending regular time with them as etudes," Lee said. "Then if you need to prepare any for an audition or competition, having experience with several of them gives you more to choose from, and it's always better the second time around!"