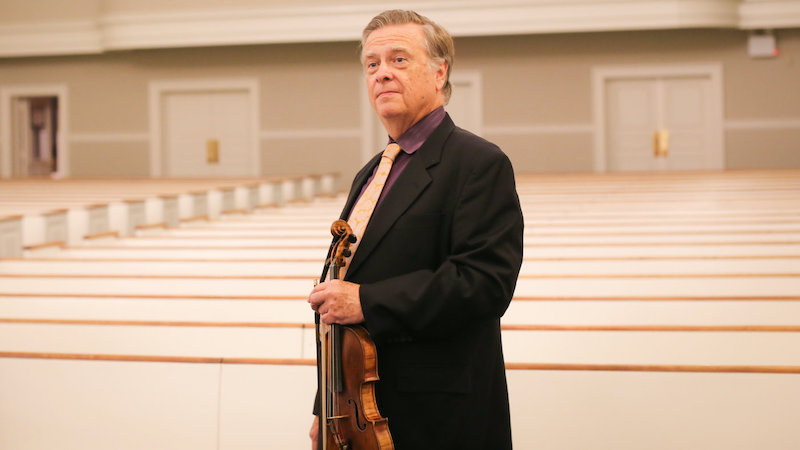 "I first heard him play as a student at the Meadowmount Music Camp, where he had returned to give a recital," said Boston Conservatory at Berklee Violin Professor Lynn Chang, who was a close friend and colleague. "We were awestruck by his musical imagination, his curiosity, his intellectualism, and especially the sheer power and bravura of his playing. And he spoke so eloquently!"

Buswell began nearly every aspect of his art at a young age, then continued throughout his life -- teaching hundreds of students, performing more than 100 concerti with orchestras on five continents, and playing and conducting countless chamber recitals and concerts.

Born in Fort Wayne, Indiana, Buswell started playing the violin at age five. Just two years later, at the age of seven, he performed his debut as the youngest-ever soloist with the New York Philharmonic. He went on to collaborate as a soloist with many orchestras and conductors, among them Leonard Bernstein, George Szell, William Steinberg, Seiji Ozawa, Sir Malcolm Sargent, Andre Previn, Pierre Boulez, and Michael Tilson Thomas.

As a chamber musician, Buswell performed at the opening of Alice Tully Hall in New York with the Chamber Music Society of Lincoln Center, which he later joined as a regular artist-member. He was also known to perform the chamber music repertoire on both violin and viola.

By the time he was in his 20s, Buswell was playing the 1720 "Leveque" Stradivari violin, the instrument he played for the rest of his life. At age 25, he started teaching, first as a visiting professor at University of Arizona from 1972 to 1973, then as a Professor of Violin at Indiana University from 1973 to 1986; and then at the New England Conservatory from 1986 to 2014.

In 2018, Buswell and his wife, cellist Dr. Carol Ou, joined the faculty of the Steinhardt School at New York University. During the pandemic, Buswell taught some 43 online classes and masterclasses on Virtuosity.online.com.

Buswell's own primary violin teachers were Mary Canberg, Paul Stassevich, and Ivan Galamian, with whom he studied at The Juilliard School. He also studied Renaissance Art at Harvard University, where he graduated in 1970.

Buswell recorded extensively, and his recording of the Barber Violin Concerto with the Royal Scottish National Orchestra was nominated for a Grammy in 2002. His first recording was in 1971, of Vaughan Williams' Concerto Accademico, with the London Symphony Orchestra. Among many other recordings, he recorded the complete Sonatas and Partitas for solo violin by Bach. He also gave world premiere performances and made recordings of works by many contemporary composers including Ned Rorem, Yehudi Wyner, Gunther Schuller, John Harbison, Gian Carlo Menotti, and Ellen Taafe Zwilich.

For the 1990 film Stations of Bach, Buswell served as narrator and guide in a documentary that celebrated the 300th anniversary of Johann Sebastian Bach’s birth by tracing the cities in Germany that were important to the composer. (The full documentary can be found, in segments, on the TheBachVideos Youtube channel.) The film was premiered at a special event in Washington D.C. celebrating the re-unification of Germany, then broadcast extensively over PBS.

James Buswell is survived by his wife of 21 years, cellist Carol Ou; their children, Anna and William Buswell; older children from an earlier marriage, Joshua Buswell and Rachel English; and four grandchildren.

He was an inspiring teacher, with the habits not unusual in 1970s teachers. I learned a lot, both viola (yes, he taught viola those 2 years!) and -- more -- about music. Hard to realize how long ago that was. I'll miss knowing he's around.

September 30, 2021 at 02:13 AM · I first encountered Jamie as a student at Meadowmount. He came back to perform a recital. I vividly remember his C major Bach.

Later, we taught at a summer festival together. It was my first opportunity to get to know him. I was going through a sad divorce at the time, and he took me to dinner and listened more than he spoke. He was very kind.

Several weeks after the festival had concluded, he called me out of the blue one night as he was driving between cities. He simply wanted to ask how I was doing.

I found this act to be completely unexpected and extremely touching. It speaks volumes about the real Jamie.

Yes--a giant violinist and a giant human have left us. Godspeed, Jamie.

October 2, 2021 at 11:44 AM · James Buswell was simply remarkable. He was a giant. He was one-of-a-kind. My daughter Njioma Grevious was a student of his over several years, and I happily sat through nearly every lesson she had with Jamie. His passing especially hurts us because from the very first lesson we appreciated him and experienced firsthand his generosity of time, knowledge and support as well as his love of the violin repertoire, playing and teaching. He blended a tremendous intellect, curiosity, depth of knowledge, ability to instruct, warmth, kindness and a sense of humor with high expectations, encouragement and belief in his students — all of which together made him ideal as a teacher. He was exceptional. His spirit was infectious.

October 2, 2021 at 02:06 PM · Mr. Buswell remains one of the most inspiring teachers and mentors I’ve ever had. I will always miss Mr. Buswell, and I am eternally grateful for his instinctive nurturing qualities, the attention he paid to my growth as a violinist, his presence as a true master of his craft, and most of all his great spirit.

I will never forget his lively and humorous explanations of concepts and techniques, the stories he told of his own teachers and moments in violin history and most of all the experiences I had listening to him play and playing with him. One of my fondest memories is from about six years ago playing with him the Prokofiev Duo Op. 56. It was exhilarating!

You are always in my thoughts and prayers Mr. Buswell. RIP to a legend.

Although we never met in person, I was most aware of the presence

& impact both violinistically & musically of the Artist & Artist Teacher

in the name of James Buswell, and for a very lengthy period of time ~

was well known amongst Music Circles far beyond the United States &

complimented when mentioned by American violin colleagues! He did

and reputation for kindness which can never be underestimated which

is acclamation of a rare human being with great gifts & humility a mate.

As illustrious violinist, Chin Kim, I echo 'Another of great violinist gone'-

departing a second generation of pupil's taught by The Iconic Violinists

who changed and illumined The World of Grandest Violin Art & Playing ...

With sympathies to the bereaved Family of James Buswell & older adult

With sincere Condolences from Chicago